Ask Me Why I'm Not In Church

A Call for the Church to Get Out of the Building

by An Anderson and Canty Production 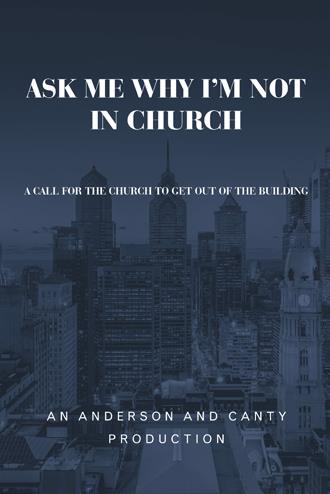 GCC began participating in prayer walks with other churches in Philadelphia. ese walks would be in some pretty dangerous areas. In those moments, we discovered the truth of the Scripture that taught us to “watch and pray.” As cars sped by, loud music and profanity rang out at random, and I could see the uneasiness in our men. As time went on, we developed a system where some of us would watch and the others would pray and the rotation would continue. Shout out to Pastor Clarence Hester from Erie Ave Baptist Church for allowing us to tag along.

We also joined a group of city churches that were participating in gun buy backs in the neighborhood playgrounds. My friend Pastor Kevin Aiken, from Heart of Worship, the chief organizer, would have a stage prepared and several of us gospel-driven conscientious preachers would preach a sermonette of peace and hope to those in attendance. You would literally have people walking pass you with guns in their hands, asking you where they could get their food voucher for turning in their unwanted rearms.

These event-oriented ministry endeavors were successful projects, but they seemed to have no lasting effects, which we could monitor. In addition, after each of these events, my church would return to our suburban location and wonder what was next. It was this spiritual struggle that left me unsettled until the next event. The wrestling match between my heart in Philadelphia and my body and church body being in the suburbs of Philadelphia became overwhelming. Finally, I felt led to share with the congregation my personal struggles of remaining at Great Commission Church as a pastor in the suburbs. Their response to me was one that still amazes me, and it affirmed d the Lord’s hand in all we were doing. The church body responded that they Mirrored my passion and desire to have greater presence and process to address the tragedies taking place in the city. In addition, they communicated they were interested in doing Whatever I believed God was calling us to do in response to this.

Now it was not just the Nehemiah Bible study that had prepared them for this moment. My preaching was based in a missional hermeneutic that would not allow me to separate proclamation from demonstration. In other words, a holistic gospel that ministered to the felt and spiritual needs was what I had been proclaiming since I became the pastor. I would often read Jesus quoting Isaiah in Luke 4:18,19, “The Spirit of the Lord is on me, because he has anointed me to preach good news to the poor. He has sent me to proclaim freedom for the prisoners and recovery of sight for the blind, to release the oppressed, to proclaim the year of the Lord’s favor” (NIV). I would invite the congregation to wrestle with James’ challenge in James 2:17 of faith without works being dead. I asked could we tell a brother or sister without clothes or food to “Go, I wish you well, keep warm and well fed?” So it was the Holy Spirit moving hearts through the Word that was turning this middle class suburban church to care deeply for the inner city.

Through scripture (the biblical narrative), this book challenges, equips, and deploys the body of Christ into the true mission of God. You will either be convicted and put the book down or you will be totally motivated to stop doing church as usual and assume your role in being an ambassador for Christ.

Dr. Larry L. Anderson Jr. serves as the Director of Healthy Churches for the Baptist Resource Network of PA. and SJ. He also serves as the Sr. Pastor of Great Commission Church located in Philadelphia PA.

Dr. D. Kyle Canty serves as the NAMB SEND City Missionary for the City of Philadelphia. He is also the Assistant Pastor of Great Commission Church located in Philadelphia, PA.