A Legacy of Faith

by Annette B. Sutcliffe & With Cindy McKeowen 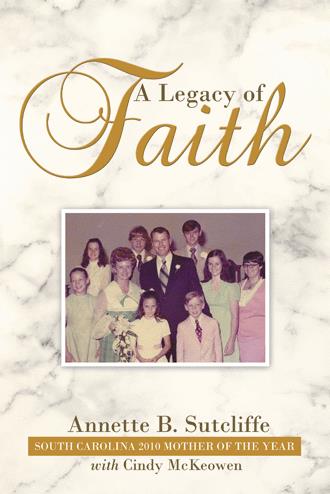 How would any working mother managing a home, job and three children respond to the idea of adding six more people to her table, her home, her prayers, and her heart? Annette Sutcliffe would have said, “You’re crazy!” And yet that preposterous scenario was to become her daily reality. In A Legacy of Faith, this former South Carolina Mother of the Year captures the essence of blending two families into one. With candor and discernment, Annette details the many trials and joys of entering a second marriage, and becoming a mom to eight children ages nine to eighteen, all under one roof. Annette never dreamed she would have such a large family-her three children were quite enough. But after six wonderful people came into her life, and before she even realized it, Annette had fallen in love with them all.

Ecclesiastes 4:12b
A cord of three strands is not quickly torn apart.
The day of our wedding dawned beautiful and fair. I awoke as I had each morning for weeks, wondering if this was really happening to me. Linnie and I planned a very small ceremony with only our immediate families. Later, while traveling to our honeymoon destination, I said, “You know, we really have an enormous job ahead of us, making a home for my three and your five childre….I mean our eight children.” “Having a few doubts?” Linnie smiled, as he squeezed my hand. “I think you know me better than that, Linnie, I responded. It’s really going to be an adventure.” I couldn’t possibly realize as I settled back to enjoy our drive how tremendous the adventure would really be.

Annette B. Sutcliffe fulfills a forty-year-old dream in telling the story of how she and her husband Linnie succeeded in merging two families into one. Selected as Times and Democrat Regional Mother of the Year in 2007, she was named South Carolina Mother of the Year in 2010. Mrs. Sutcliffe’s 2012 cookbook, A Taste of Country, is sold statewide. Annette has a special commitment toward couples who are beginning marriage, especially those entering a second, blended family.