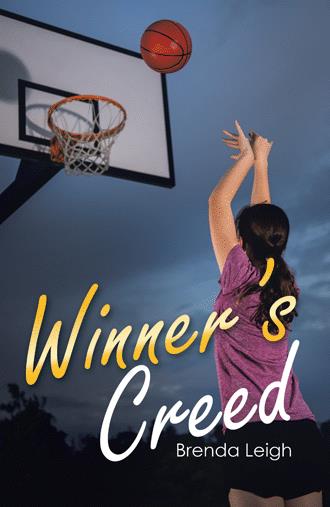 As luck would have it, Christy was the last player on the court for basketball practice on Monday. She had received a note to report to the office at the end of third block. When she arrived in the office, no one knew anything about a note, nor who had sent it. By the time she had gotten to the dressing room, everyone was on the court, and the sounds coming from the gym indicated practice was in progress. She heard the whistle blow. The new coach was issuing commands as she hurried onto the court.

“Glad you decided to join us, Rivers!” a voice boomed.

Christy turned toward the new coach. She was never given the chance to explain her tardiness because she noticed immediately the direct gaze and unyielding expression on the new coach’s face.

“I expect you to be on time for practice. You owe me ten laps through the bleachers.” With those few words said, she had turned away and continued where she had left off with the other players. Whew, Christy thought, what a way to start the first day with the new coach.

She quickly ran the ten laps, thankful that she had worked so hard all summer. As she ran, she couldn’t help but notice Liz and her little group with their heads together whispering and giggling as she ran by them. She had just finished the last lap when Coach Thomas blew the whistle and motioned the girls to arrange themselves in a circle on the floor.

“Looks like you’re getting off to a great start with the new coach,” Liz whispered sarcastically as she moved by Christy on her way to sit beside her friends.

Christy didn’t miss the gleeful gleam in Liz’s blue eyes as she spoke to her or the giggles from her friends.

The snickers were quickly cut short when Coach Thomas began speaking. “I can tell you have been working hard the first couple of weeks, but I’m warning you now you’re going to work even harder. Basketball is a very competitive game. You have to be in great shape to win, and we are going to win. If you aren’t willing to be at practice on time and give practice your all, then you need to get your schedule changed.” She looked straight at Christy when she said the last part.

The players were listening attentively to their new coach. She was down on one knee, her elbow resting on the other knee. Christy couldn’t help but admire her. She was tall and slender with short blonde hair that made her look like a young boy. There had been a lot of information passed around over the weekend about the new coach. She had received her bachelor’s degree at the University of Arkansas at Fayetteville, where she had played for the Lady Razorbacks. Later she received a master’s degree from the University of Texas at Austin, where she had worked as an assistant coach for ten years. Christy couldn’t help but wonder why anyone would give up a job like that to coach at a small high school in southeast Arkansas.

“If you work hard, we have a good chance of an outstanding season. Remember, your attitude has a lot to do with your game. We are going to work on aggressive man-on-man defensive, and this should help make our offense better. Now let’s see what you can do.”

They ran line drills before working on fundamentals. After the line drills, they began with drills as simple as handling the basketball, dribbling, and passing. They worked on their guarding stance and movement. They moved on to working on pivots and fakes.

“Don’t fake with just the ball,” she told them. “Use everything. You want your opponent to think you’re going to do one thing when you intend to do something else. You have to use the ball, along with your eyes, hands, and shoulders.” She took the ball and showed them what she wanted before having them line up at the end of the court in several rows to practice faking and driving one-on-one.

Christy threw herself into the practice with all her energy. This was one of the things she liked, the thump of a basketball, the feeling of hard leather on her palms. After faking and driving around her guard, Christy changed places with Tonya and got into her guarding stance. She did a good job guarding Tonya as she tried to fake Christy out.

After finishing her turn and waiting another, she observed Coach Thomas showing Liz how to bend her knees more in her guarding stance and how to keep her eyes centered on her opponent and move with her. Coach Thomas definitely knew what she was doing.

By the end of practice that first day when a halt was called, there was not a player who didn’t know what was in store for the days ahead. As Christy changed her clothes in the locker room, she tried not to think of the bad start she had gotten off to with the new coach. All around her, there was laughter and lighthearted conversations going on, but this only seemed to weigh heavier on Christy’s troubled thoughts. She hadn’t spoken one word to the new coach; nor had the coach spoken directly to her after issuing the command for the ten laps unless you would call the suggestion to quit if you weren’t willing to be on time. Talking about a start, she had really gotten off to a great one.

“Christy, why were you so late for practice?” Karri commented.

“I’ll tell you about it later,” Christy answered as her thoughts returned to the unsolved note.

Where had it come from? Christy hated unsolved mysteries. She looked around the dressing room for Liz but noticed she wasn’t there. 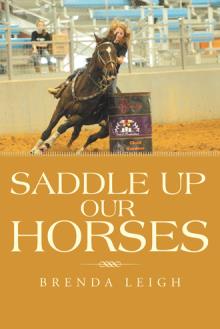 Saddle Up Our Horses
Brenda Leigh
$13.95

Christy Rivers is short in stature but determined at heart to play basketball for the Lady Lions her senior year. After spending all summer working on her shooting skills, she’s perfected an outside shot sure to earn her a place on the team. The only problem is the team’s star player, Liz Parker, doesn’t want Christy to be on the squad.

Christy shares her faith with others, struggles with having family members serving in a war zone, and works hard to smooth the problems with Liz. When a new coach takes the helm of the Lady Lions, Liz begins a campaign to cause problems that may keep Christy’s dreams from coming true.

Liz will go to almost any length to get Christy off the team. Christy’s faith is tested when it comes down to the winner of the Purple and White game determining if she gets to wear the Lady Lion uniform. The whole team is about to learn the value of every player on a team working together.

Brenda Leigh worked as a math teacher for middle school and high school students for more than twenty-two years. Leigh and her husband, Danny, live in Arkansas and have four grown children and nine grandchildren. This is her first fiction book for teens and young adults.