The Daze of Adulting

by Janine B. Hegle 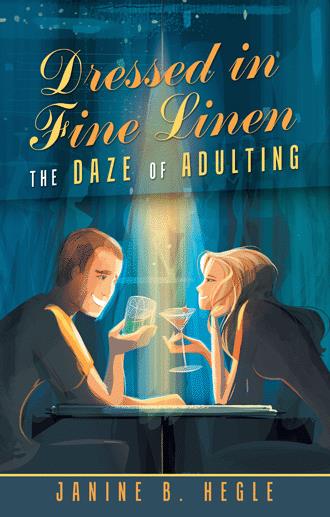 The bus wasn’t very full yet, but by Royal Lane there would barely be standing room. Roger stood up and moved over to a seat to be with someone he knew. “May I sit here, Miss Erica Webb?”

The awkward silence was getting to Erica. She wanted to encourage Roger, but how? “I was noticing your wedding ring. It’s one of the nicest guys’ rings I’ve ever seen. I like all the diamonds.”

She was bewildered. She wondered if he thought it wasn’t manly enough. “And why not, may I ask?”

“You really want to know? It’s because it keeps me from dating women like you.”

“Oh.” Erica gulped and stared downward, trying to control her breathing, pretending to herself that she hadn’t just heard what she knew she had. It was only 7:30 a.m., and her very handsome boss was hitting on her. Goodness, she was still half asleep, and this was not what she had planned for on her ride to work. Sure, she usually looked forward to his encouraging comments, his flattery, but this was downright inappropriate. What was he thinking? He’s got a wife and kids. Doesn’t that mean anything to him? At twenty-eight he’s too young for mid-life crisis. It just didn’t make sense.

The rest of Erica’s day was spent in a daze of unbelief as she relived the interaction over and over in her mind. It was 2:30 p.m. and time to take all the newly updated case files to the bosses. “Rusty, here are today’s checks, all ready for deposit.” Erica plopped the files on the edge of Rusty’s desk. “I’ll get the rest of the paperwork to you before your meeting. I just have to draft a letter of explanation for the No.5 account.”

“Great. Keep up the good work. I appreciate all you do here.”

Rusty was such a gentle, sweet man. Sure, his hair was thinning and his pants were starting to be worn old-man style, but he had a sweet grandpa way about him that would put a smile on anyone’s face. Erica liked the simplicity of working for a sixty-four-year-old man. Rusty kept pictures of his wife, his only son, and his five grandchildren and their mates on his desk. He also kept everyone up-to-date on his soon-to-arrive great-grandson. It’d be his first. Rusty would retire soon, and Erica wondered if she’d be offered his job.

Erica walked over to Judith’s desk and gave her some checks as well. Erica couldn’t understand why Judith insisted on wearing her hair in a 1960s-style beehive; it looked so out of date. She was sweet, but definitely out of touch when it came to fashion. On to Roger’s desk. Erica both dreaded and desired going to Roger’s desk since his early morning announcement.

“I have your checks ready.” Erica was formal.

“You really do look lovely today. Another new outfit? My, my.”

“Yeah, I guess.” She wanted to ignore him, so she downplayed the issue. Sure, it felt good to have someone notice these little things, but now it seemed so wrong.

“I have a riddle for you. What’s better than a rose…” His voice trailed off into a whisper she almost couldn’t hear.

Erica didn’t guess the answer to the riddle. “I give up? What’s the answer?”

Erica didn’t even catch on to the answer at first, but when she did, her face flushed red. Her naivety was showing. Disgusted, Erica blurted out, “You have a lot of audacity, telling me such a crude joke.”

“You love it and you know it.” Roger chuckled.

Erica wondered if that were true. “I do not. I think you have me all wrong.”

“Do I? You prance around here in your alluring clothing, and you’re quite talented with those flirty eyes of yours. What’s a man to think? Oh, you may not say it out loud, but you want me.”

“Give me a break. And I dress stylish, not alluring. Look at what I’m wearing—a pale green skirt and a matching top with an innocent country girl look. Sheesh, the skirt goes all the way down to my ankles!”

”Ah, but the slit goes up your left thigh, and the neckline is open, so when you hand me those papers—” He had a gleam in his eyes.

“Only a perv like you would think like that.” Erica couldn’t believe she’d just said that to one of her bosses.

Roger continued. “Okay, how about that delicate, white sundress of yours—a bit skimpy, eh? Or the tight black skirt with the sequins? Or the red top that’s rather sheer? Just yesterday you wore a brown suit, and it had a slit up the back that was very fine, if I say so myself. And then there’s the V-neck…” Erica was feeling dizzy and Roger’s words were fading into a distant haze. This guy was recalling all the clothing she’d worn over the past two weeks. There was an ache in her gut; a sinking feeling. Her forehead started to pound. She loved all her new clothes—to her they were sharp, cute, funky, stylish—, “…short, striped skirt and those sexy four-inch purple strapped heels that let me know you’re coming, and—”

“Is that an invitation?”

“ARRGGH!” She left him, trying not to show her fury. She certainly didn’t want to be answering any questions from her co-workers, but if she could have, she would have stomped off and slammed a door and flung her chair up high and flipped another one over. Yep… that’s how she imagined her rage in action.

Mitch had already left for his home in New York, so Erica still hadn’t told him about Wally. She knew Margie had her suspicions, but since Margie had gotten her connected with Wally, Erica hoped she’d play dumb and mind her own business.

The truth was, Erica simply couldn’t resist Wally’s charm and transparent honesty. His worldly life-experience seemed to add to his magnetism. So, when he asked her out for New Year’s Eve, she knew it would be for a real date, and there was no way to deny it.

It seemed that Erica couldn’t open her Bible these days Without conviction piercing her heart. She couldn’t stand to pray one more time to ask forgiveness for something she knew she’d want to do the next time the opportunity presented itself. After all, she could have fun when she didn’t let her heart communicate with her mind. She didn’t seem to care about what she was doing, but she cared enough to ask God to help her to care again.

Janine Hegle spent 20 years abroad between Papua New Guinea, Indonesia, and Peru. She has trained national Bible translators, taught high school English and electives, and been involved in short-term accountant jobs. She continues to be amazed at this thing called grace.