Use Your Time Wisely

Developing the 5 Senses of the Human Spirit

by Oron B. McPhee 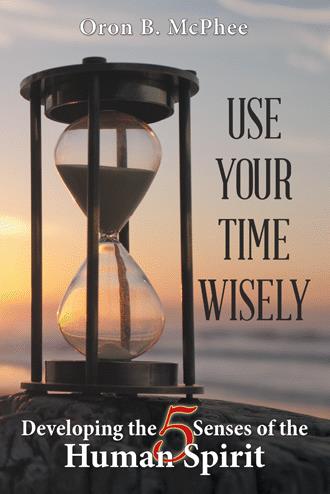 The human race has been given a mission. This is not a mission impossible. It will be a mission impossible if the mandate given by God is to be accomplished by the human natural physical and soul senses. It becomes impossible to the human natural efforts because God is a spirit being and natural fleshly abilities cannot complete any spiritual task given by God to man. Man’s flesh can only communicate with the natural world it sees, hears, feels, smells, and taste. The soul of man can only communicate using the intellectual, emotional, and imaginations of the mind to respond to the social environment he wills to lives in. Therefore, only spirit can communicate to the human spirit for the revelation of truth to become tangible.

God’s mandate is for every man to become fruitful, for him to multiply, for man to be active in replenishing the earth, to subdue new territories and to also take dominion.

GENESIS 1:26-28 (MSG)
God spoke: “Let us make human beings in our image, make them
reflecting our nature
So they can be responsible for the fish in the sea,
the birds in the air, the cattle,
And, yes, Earth itself,
and every animal that moves on the face of Earth.”
God created human beings;
he created them godlike
Reflecting God’s nature.
He created them male and female.
God blessed them:
“Prosper! Reproduce! Fill Earth! Take charge!
Be responsible for fish in the sea and birds in the air,
for every living thing that moves on the face of Earth.”

Take a much closer look at Genesis 1:26-28… it says that man must be the responsible reflection of God in this earth. He did not say that man must be the responsible, natural agent in this world, simply because there is a vast difference between the earth and the world. The difference lies in the following truths, which are, the earth is the physical, tangible place that we as human being inhabit. The world is the mentality and behaviors that drives and entices the human race outside of the leadership of God.
Psalm 24:1
The earth is the Lord's, and the fullness thereof; the world, and they that dwell therein.

God created the heavens and the earth for the specific purpose of establishing a direct line of connection between man’s obedience to Gods authority. Had man maintain his first position, and not had the desire to know good and evil, there would have been God and man in complete oneness, through the connection of heaven and earth.

Genesis 1:1
In the beginning God created the heaven and the earth.

Genesis 1:15
And let them be for lights in the firmament of the heaven to give light upon the earth: and it was so.

God’s authority can only be established in the earth through the obedience of man for as long as man was able to carry out the mission given to him through the mandate of God. After Satan made an attempt to overthrow God, by wanting to be like the Most, High God, he was cast back down to the lower realms without authority in this domain any longer. God had replaced the dominion over this earthly realm with the image of himself, which is man. The only thing left for Satan to do was to deceive man into disobeying God. He knew that if man disobeyed God’s authority, he would break the connection between heaven and earth by injecting a third arena. This arena is known as the world. This world is the mentality of the knowledge of good and evil that is engineered to minimize the authority of God by disconnecting man from his source through the rebellious act of disobedience.

Adam’s rebellion against God’s authority, released apposing desires against Gods will for man and therefore, man’s soul was blinded by the god of this world, who is Satan, through the doorway of man’s physical nature.

Romans 5:12
Wherefore, as by one man, sin entered into the world, and death by sin; and so death passed upon all men, for that all have sinned:

This brings me to the mission that everyman has been given, during his appointed time in this earth. This mission assigned to every man, is for him to be able to walk into Gods best by being the real tangible expression of the God Head Bodily in this earth according to Colossians 2:9.

Colossians 2:9
For in him dwelleth all the fullness of the Godhead bodily.


The Word of God states that God made human beings to be “…godlike, reflecting God’s nature…” in this earth. Then He tells us according to the Message Bible to “Prosper! Reproduce! Fill the earth! Take charge! and to be responsible” agents of change in the earth. This can only happen when we live according to the covenants that the Word of God has laid out for each expression of Gods creation to obey.

God gave man a mission. This mission must be carried out through the acceptance of his five assignments, as we have read earlier. These five assignments can only be realized and accomplished through the development of your five human spirit senses. Developing the five senses of the human spirit is a mandatory reality for any born again believer to become that reflection of Godly responsibility in the earth. This spiritual maturing will be the only door necessary for these five assignments given by God to be fulfilled. This door is open by the power of the tongue. “out of the abundance of the heart, the mouth, speaks.

The greatest weapon we have been given as children of the Most High God, is the ability to use our tongue. Without this powerful weapon, man cannot be true expressions of God in the earth. Genesis Chapter 1 defines who God is, and how He addressed situations that turned chaotic. The Bible tells us that “God said “, He spoke to the void in the earth and as He spoke to the void, everything that was out of order came under order as He spoke. God spoke the life of His Word, and things changed. After we have developed the five senses of the human spirit, we must now undergo a language metamorphosis, thereby, transforming our worldly language into the heavenly language of the Word of God, by learning to Speak Life.

Are you ready to experience an extraordinary intimacy with the Divine Presence of God, which empowers you with His Divine Purpose for your life, thereby, releasing His Divine Power and Authority for you to achieve this? Then you are ready for the adventure available through the fundamental principles within this book to assist you in your spiritual development. USE YOUR TIME WISELY, Developing the five senses of the human spirit, is a navigational tool, to assist everyone in constructing this link, necessary for embracing the Divine Nature of the God within you. We live and can function in three worlds. A. The NATURAL REALM, through our five natural senses B. The SOUL REALM, through the five senses of our soul. C. The SPIRIT REALM, through the five senses of our human spirit. Very few have been able to access the key components made available to the believer through the five senses of the human spirit for maximum tangible results in life. What Adam lost in the beginning, Jesus, made available after the cross for you, to accomplish your mission while on earth, which are to: 1. Be Fruitful 2. Multiply 3. Replenish the earth 4. Subdue new territories 5. Take Dominion.

Meet Oron B. McPhee – He is the Senior Pastor of Unity In Christ Church, which was founded and established by his father, the late Apostle Bernard McPhee over forty five years ago. He is a Mentor to Young men, a motivational speaker, an advisor, a high school teacher and an athletic coach through which he uses these opportunities to SPEAK LIFE into, and over this next generation to enjoy living the maximized life. Oron lives in the city of Freeport, Bahamas and has three children, Adriel, Destiny and Riche’ Mcphee.