The Faith, Courage, and Accomplishments of Major James Lide Coker

by Dr. Will Joslin 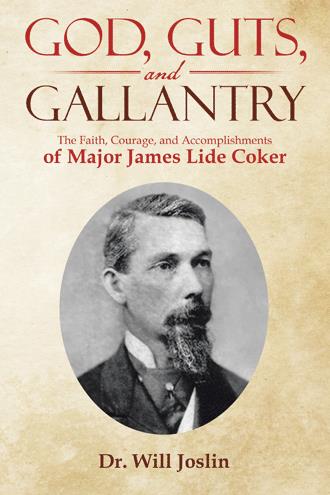 In the wake of Civil War wreckage, few places were worse off than Darlington County, which Sherman had targeted for devastation. The Cokers were now as destitute as their neighboring sharecroppers. They had no money to speak of, no carts or wagons, and their crops were ashes. Major James Lide Coker lost everything he had, including the use of one leg.

To make matters worse, the county was now overrun with “carpetbaggers,” northern businessmen and politicos who took advantage of the defeated South by trying to gobble up their business markets, often dishonestly. How would Major Coker respond? The wolf was at the door, and this was the moment of truth.

James refused to blame God. Neither his shattered leg nor Sherman’s barbarism could blur his vision or diminish his faith. Later he wrote that he and other Confederate Christians were “believing that they would not be altogether forsaken of God, but would receive His guidance in the dark night which enveloped their beloved Southland.” Lesser men would have been embittered, but without malice, James kept a good attitude, and focused on what he could control. He embraced the principle of Proverbs 24:16: “A righteous man falls seven times and rises again.”

James and Sue still had one milk cow which Sue had had hidden from Sherman deep in the swampy woods, and an old mule which the soldiers deemed unfit to steal. James found some cottonseed and seed corn that Sherman’s destroyers had overlooked. With an indomitable song in his heart, he gallantly rose up with a crutch in his left hand and a hoe in his right and met the challenge head on. Aided by five freed African Americans, the old mule, and a pair of oxen borrowed from an uncle, he resolutely planted sixty acres of cotton and forty of corn.

From this new beginning, wrought from one useable leg, hard farm labor, ingenuity, and dirty overalls, James set in motion an astonishing comeback. Against all odds, over the next few decades he became the leading businessman in the state and lifted up the prosperity, educational opportunities, and spiritual life of all cultural levels in Darlington County along with him.

Major James Lide Coker of Hartsville, South Carolina was a gutsy man of God and an entrepreneurial genius who founded 20 successful businesses. He grew up in the Old South, but became one of the most forward-thinking leaders of the New South. His business odyssey alone makes a fascinating story, but his expansive heart and keen intellect reached well beyond commerce. He was a passionate leader of the Christian faith, a pace-setter in women’s education, and a progressive in race relations. Ahead of his times in every way, he concluded his own book on the Civil War with these words: “There is one great result of the war between the States for which we are truly thankful: slavery is abolished.”
Though high-born, he and his family were brought low. In the Civil War, he bravely defended his homeland, fighting with Robert E. Lee and Stonewall Jackson in Virginia, where his brother was killed. In Tennessee, James’s left thigh was shattered at the Battle of Lookout Mountain, and he became a prisoner of war. Delirious with pain, he had several harrowing escapes from death before finally returning home to Sherman-devastated South Carolina.
He had lost almost everything, including the use of a leg. But with extraordinary valor, he rose up with a crutch and a hoe to re-establish his farm, and went on to lead the economic, educational, and spiritual rebound of his region in a time of crisis and carpetbaggers.
James became the wealthiest man in South Carolina, yet remained humble and down to earth. His war agonies and innate sensitivity to human need enabled him to identify with the harshest realities of the human condition and with the plight of the disenfranchised. When his ingenious and diligent post-war initiatives brought him rivers of prosperity, he let them flow through him to bless countless others in his rural state. A deeply spiritual man, Major Coker also faithfully taught the boys’ Sunday School for thirty-eight years.
Today, we have too few leaders of genuine integrity. We need more like the Major – rock solid, gallant, far-sighted, and good to the core!
For the benefit of present and future generations, his inspiring story, with fresh perspectives and previously unpublished material, is retold in Dr. Joslin’s unique style, blending biography, daring adventure, courageous faith, and the drama of American history.

After searching seemingly in vain for purpose in life, Will Joslin experienced a dramatic Christian conversion as a pre-law student at UNC-Chapel Hill. Accepted into law school, instead he chose full time ministry for 17 years. Afterward, he spent 25 years in business, mainly running his own IT consulting company, Joslin Computer Solutions, Inc. He and his wife Becky are now back in ministry part time as he concentrates on writing. Aside from ministry and running a business, Will has taught on leadership, led men’s groups, and coached basketball and golf. He is a graduate of UNC-Chapel Hill, has a Master of Theology from Dallas Theological Seminary, and has earned an online Doctor of Sacred Literature (D. S. Lit.) from Wycliffe Theological Seminary. Will enjoys golf, swimming, and sailing.