The Journey of Christopher 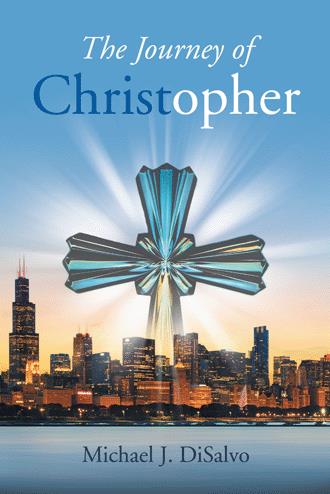 Mike’s pure and deep voice then echoed throughout the darkness-filled stadium. “It’s kind of a lonely feeling, standing there alone in the dark, isn’t it? Lucky for you, there is always some light, even in complete darkness, if you know where to look.”

“But I don’t see any light at all,” Christopher said.

Just then, he saw the crystal cross from his desk sitting in the grass right where he had put it down. All of a sudden, the cross began to glow. A beautiful, radiant, peaceful light shone from the cross, and Christopher felt drawn to it. He walked over and knelt down beside the beautifully illuminated cross. It seemed to be calling out to him. Christopher wrapped his hand around the base of the cross. He felt a warm, loving sensation go through his body, passing through one cell at a time, the way a set of dominos fell one at a time, with each touching the next. Mike’s voice then seemed to whisper in Christopher’s ear: “He is the way, the truth, the light.”

All of a sudden, Christopher felt everything start to spin around him again. He instinctively clutched on to the cross as tightly as he could. The light of the cross grew even brighter, and then the cross shot up into the sky, bringing Christopher along for a ride. It pulled him upward into the night sky, and he had no control over where he was going or in which direction. Before he knew it, he was above the stadium, looking down on it. Then he was high above the city. The lights and buildings were beautiful from that angle.

The towering skyscrapers of the skyline got smaller and smaller as Christopher was pulled higher and higher. Soon he could see nothing except the clouds below him. Next, he was pulled outside Earth’s atmosphere, and he looked down on the beautiful blue planet. There were no words to express what he was seeing. He was too amazed to say anything as he tried to take in as much of the fantastic ride as possible. He moved faster and faster as the cross pulled him past the moon. Earth now looked like a tiny blue marble. The speed at which he was traveling increased even more. He flew past all the planets. He passed the Red Planet, Mars. Next, he passed the enormous Jupiter and all of its moons. He passed the amazing rings of Saturn and then Uranus, Neptune, and Pluto. Each heavenly body passed by quicker than the previous one. Then the logical part of Christopher’s mind kicked in.

“Mike, how am I breathing in space? There’s no oxygen out here!” he said, hoping Mike could hear him.

Christopher knew that was exactly what he should do. Why was he even trying to make any sense of what was happening to him that night? He couldn’t have explained any of it even if he had tried, so why wonder about things he obviously couldn’t control? Yes, logically, he knew he shouldn’t have been able to breathe in space. But logically, he shouldn’t have been able to fit into a tiny gift box or be teleported instantaneously from his bedroom to a football stadium either. As Mike had suggested, he would just try to enjoy the ride and take in all of the breathtaking sights. He was now completely outside Earth’s solar system. With his speed still increasing, he passed through the entire Milky Way Galaxy in no more than a few seconds. He was able to focus for a minute on the spiral-shaped galaxy, which he had seen many pictures of in school. Those pictures sure didn’t do the real thing justice, he thought to himself. He thought he must have been at top speed now, because stars and planets were flying past him so fast that he felt as if he were in a Star Wars movie. The stars seemed to be long rows of lights that were all connected somehow.

After a few more minutes of high-speed travel, the cross all of a sudden stopped glowing, and Christopher came to a sudden halt. He hovered there in space, floating like a buoy in the ocean.

He looked down below his dangling Nike sneakers, and right below him was a humongous planet that looked as if it could have fit five planet Earths inside it. It was a color he had never seen before—a combination of purples, blues, yellows, and grays. The colors seemed more vibrant than the colors of Earth.

“What is this planet below me? Mike, why am I stopped here?” Christopher asked.

Mike did not answer, but the crystal cross lit up again. The cross pulled him down into the beautifully colored planet. It pulled him through the planet’s atmosphere so fast that a white glow surrounded him like a cocoon. The glow was so bright and intense that it was all Christopher could see around him. He knew he was traveling at an extremely fast rate of speed. Suddenly, the white glow around him vanished. The light of the cross extinguished, and incredibly, Christopher found he had safely landed feet first on the strange new planet.

The young man looked around, trying to comprehend the last few minutes of his life. It was not

every day that a human being traveled at the speed of light from one galaxy to the next, let alone

found himself standing on a strange new planet.

Sixteen-year-old Christopher is an intelligent, strong, and street-smart young man who is not afraid to speak his mind, especially when standing up for his beliefs. But as Christmas quickly approaches, Christopher deals with a crisis of faith. When he struggles to cope with some of the losses he has faced, he begins questioning everything about the holiday. Just as he reaches what seems to be his lowest point, an unexpected guide comes into his life to show him a power he has never known.

In this coming-of-age tale with an important message, Christopher is taken on an epic journey to faraway lands. He soon learns the significance of staying on the right path while enduring numerous trials and life and death battles. As he is led to meet otherworldly characters, Christopher learns how simple choices can draw the line between good and evil. If Christopher can survive this journey, he will not only rediscover his faith but also just how powerful the word of Jesus truly is.

Michael DiSalvo is an author and poet who draws upon his personal life experiences as inspiration for his writing. Having always had a passion and interest in being an author, he studied creative writing in college and even worked as a book seller to be around the written word. He excelled in a career as an analyst, as he enjoyed working to find the hidden story behind every problem. Originally from Chicago, he is a die-hard fan of the city’s sports teams. He is happily married to his high school sweetheart, and they live in South Florida with their dog, Jordan.