Finding True Victory in the Midst of Adversity

by Demario Davis, With Becky York & Foreword by Benjamin Watson 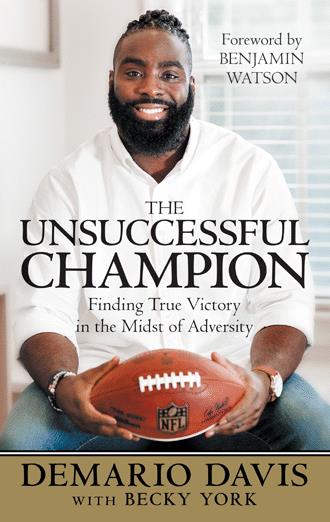 Note to the Reader

My life has been one filled with moments of many great feats as well as some not-so-great feats. I’ve competed countless times, and many times, I’ve fallen just short of success—from losing the championship game in my Pop Warner football league, to coming just shy of winning the state championship with my high school basketball and track and field teams. In college, we once won conference but lost the bowl game. While I was with the New York Jets, we went 10–6 and pulled up just shy of qualifying for the playoffs. Last year, with the New Orleans Saints, we were just one overtime play away from going to the Super Bowl. Even now, I’ve been named one of the top linebackers in the NFL, but I’m not the top. With almost everything I’ve aspired to be or do, I’ve either struck out and missed it completely or fallen just short of the mark. I’ve seen all of the disappointments one can imagine, all of which threaten to lessen my morale, and yet I’ve continued to get up and try again. I have not, and will not, allow it to defeat me.

While in this life I may experience disappointments and be left with unmet goals, I know the ultimate victory has been won by Jesus Christ, who has redeemed me as a champion over this life. It doesn’t matter if I gain Super Bowl on top of Super Bowl on top of Super Bowl rings. I can be undefeated in the world but lose in life if I don’t have Christ on my team. Then all I would be is a successful failure. I’d rather be an unsuccessful champion. The greatest goal we can have is to gain an eternal, heavenly crown.

Though I may experience unsuccessful moments in this life, I’m successful where it counts. So here I stand, crowned as a victorious child of the King.

But seek first His Kingdom and His righteousness, and all these things will be given to you as well.

Flashbulbs pop, smoke fills the air, the music blares, and the crowd’s roar rises to an ear-splitting level as I jog onto the turf. Never did I think I would make it here. I was told I wouldn’t. I was undeserving, underprivileged, too big, too small, too poor, too talkative, too far gone. But God.

As I jog onto the football field each week and join my teammates to take on whomever we’re facing that day, I stop to thank God. He’s the One who brought me here. He’s the reason I’ve been able to play the last seven years in the NFL. Not only that, He’s given me a beautiful wife, four amazing kids, a brotherhood of men to live life with, and most of all, an eternal mission that has set the course for my life. None of which I deserve.

I came from nothing. Not that I’m ashamed of this. In fact, I’m proud of it. I love my story because it’s just that—mine. And as messy as it may be, I know God has redeemed every event in my life to piece together the puzzle that makes up Demario Davis.

In the game of football, the goal is to score a six-point touchdown. When your team is down a few of these, it can seem impossible to come back. But there’s always a way. Maybe it’ll take a few onside kicks, Hail Marys, or simply a miracle no one sees coming. That’s kind of how my story goes. I had some points against me, more than six … but I was able to make a comeback. And I’m thankful to God that today I’m able to say I’m running my race hard. I won’t ever give up because no matter how dire things may look, there’s always a way to overcome all odds and find victory. This story is about something much greater than me.

I share my story with you with expectant hope that you’ll not only find it to be inspiring but also motivating. Everyone’s got a past, a future, and a story within them to be wrapped up between bookends. Here’s mine.

NFL linebacker and philanthropist
Demario Davis currently lives in Nashville, Tennessee with his wife, Tamela and their four children. Born in Mississippi and raised by his single mom and grandmother, Demario has beaten the odds placed against him and made a name for himself as one of the top linebackers in the league. But greater than any title he could earn on the football field is the one he holds as a child of God. Demario devotes his life to making, not his name, but the name of Jesus Christ known.
With a passion to inspire the next generation of leaders, Demario, along with his wife, Tamela, have founded a non-profit called Devoted Dreamers, to equip young people with the tools and resources to reach their full potential spiritually, mentally, and physically. In addition to his role as a speaker and mentor to the youth, Demario often speaks to churches, schools, and other groups to share his story and the message of the Gospel.