Essential Elements of Ordination in the Bible and History 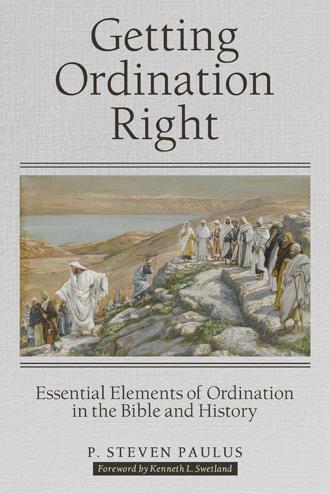 Is it necessary to be ordained in order to conduct pastoral ministry in the Christian church? Is ordination practiced in the Bible, and is there a recognizable pattern of ordination? What purpose does it serve? Who may receive ordination? Who may confer it? How is it conferred? What is the role of the existing ministry or of the congregation in choosing candidates for ordination? These questions are asked by many church bodies today, not only in the historic Christian communions, but especially in the many developing congregations, mini-denominations, and networks traditionally known as free churches. For the former, it is a matter of grasping time-honored traditions. The latter seek clarity, or even legitimacy, especially for pastors or other ministers serving these churches.

The doctrine of ordination is foundational to questions of ecclesiology. “In contemporary theology there is no question more difficult, more controversial or more urgent than the meaning of the ordained ministry.”

Other questions come to mind. Is ordination necessary to legitimize ministry? Conversely, is ministry legitimate simply because it is ordained by a church body?

ordained through human agency. Moses was not ordained by human authority, but rather responded to the extraordinary call of God at the burning bush. However, he did later appeal to human authority, the elders of Israel, and gained their support in his efforts to win Pharaoh’s consent to release Israel from bondage (Ex. 4:29-31). The people of Israel ultimately recognized and followed the greatest of Hebrew prophets.

The prophet Amos declared, “I was neither a prophet nor a prophet’s son, but I was a shepherd, and I also took care of sycamore-fig trees. But the Lord took me from tending the flock and said to me, ‘Go, prophesy to my people Israel’” (Amos 7:14-15 NIV). He was rejected by the religious establishment of the Northern Kingdom, possibly due to his lack of priestly or prophetic credentials or perhaps because of his origins in the rival Southern Kingdom. The community of the faithful in Israel came to a different conclusion regarding his ministry, placing his pronouncements in the canon of Scripture.

John the Baptist received no formal endorsement from the religious establishment authorizing his ministry. Thus, the religious leaders feared the question from Jesus, “Why then did you not believe him?” (Matt. 21:25).

The Apostle Paul made it clear that his apostleship was based on a supernatural call and was “not from men neither by man” (Gal. 1:1). He was later commissioned with the laying on of hands along with Barnabas by the church at Antioch for missionary work among the Gentiles and Jewish diaspora (Acts 13:1-4). He considered the proof of his ministry to be results rather than ceremony. So he wrote to the Corinthians, “You yourselves are our letter of recommendation, written on our hearts to be known and read by all” (II Cor. 3:2 ESV).

“Who ordained you?” is at the heart of the elders’ questions to Jesus, “By what authority are you doing these things and who gave you this authority?” (Matt. 21:23 ESV). It can be said that all ministry comes down to this question, which leads directly to the nature and purpose of ordination in the Bible and history.

Though some of God’s choice servants never functioned under the sanction of human authority, in many cases ordination is practiced in the scriptures. How was this issue handled in the Bible, and what was its significance? Just as important, how has it been handled in history? The subject produces differences in both opinion and practice.

All kinds of suppositions about ordination abound. It is thought that Jesus ordained his disciples, that the rite has been practiced continuously since apostolic times, that it has scriptural warrant, that it confers on the recipient a special character that remains with him or her for life, that it protects the church from heresy, that only the ordained should administer the ordinances or sacraments, that it transmits grace for office, that it does not transmit grace for office, that it conveys authority, that it conveys nothing whatsoever, and so on.

Today’s milieu sees many people who serve independently, claiming an extraordinary call of God. Like the prophet Amos or the apostle Paul, their claim of apostleship or ministry is not of man, nor from men. But is this ever legitimate today? If it is sometimes legitimate, is it always legitimate? How do we know? How has this been viewed historically? Are there some circumstances, practical or historical, in which we should expect this kind of immediate calling without the confirmation of a community through ordination more than in others? “Even a congregation that has no official officeholders can be a church in the full sense. But no local church can endure over time and remain true to its own calling without at least implicitly recognizing offices.” The significant issue of the meaning of ordination in the life of the local church calls for clarification.

Getting Ordination Right addresses the basic questions: What are the essential elements of ordination? How is ordination practiced in the Bible and in the church throughout its history? How should it be practiced today?

Steve Paulus has served in pastoral ministry for over thirty years. He is pastor of Staunton Grace Covenant Church in the Shenandoah Valley of Virginia. Steve lived with his wife and three children in Croatia in the 1990s where he taught and served as the dean of the Evangelical Theological Seminary (ETS) in Osijek. He teaches regularly at the Ukrainian Evangelical Theological Seminary (UETS) in Kiev, Ukraine and leads the Institute for Pastoral Studies in affiliation with ETS. He and his wife, Jane, have three children and seven grandchildren. Steve has earned a DMin from Gordon-Conwell Theological Seminary in South Hamilton, MA, an MDiv, and an MA in nonprofit law and management from Regent University in Virginia Beach, VA.