The Quest of Quinton

The Mystery of the Golden Scroll 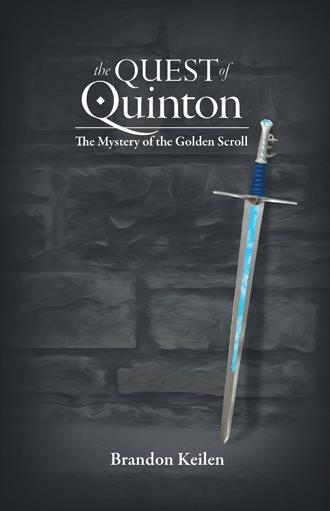 The Attack on the Keep

Long, long ago, in a faraway land beyond the sea, a young boy was on a journey. His name was Quinton. As he walked through rolling hills that rested at the foot of the Great Mountains, he traveled with rising anticipation. He’d been awaiting this day for a long time.

His destination was the Keep, a lone fortress at the center of the realm. Seven knights guarded this special fortress—and Quinton’s father was one of them. It was extremely rare for anyone except these knights to enter the Keep, and few people had ever seen what it guarded inside. But on this particular day, Quinton’s father was going to take his son through the fortress’s locked doors. Quinton would see for himself what lay within the Keep’s protection.

As he neared the hill on which the Keep was built, he was amazed by its solid structure topped by a high tower with narrow windows. He felt certain that nothing could ever penetrate those thick walls.

He drew near the steps leading to the Keep’s front door, where he was met and greeted by his father. “My son, you’ve made it! Are you ready to behold this land’s greatest and most precious treasure?”

Quinton is very excited. The young boy is making his way toward the Keep, a special fortress at the center of the realm. There, his father—a knight—waits to guide him through the fortress’s locked doors to behold a powerful treasure that is being guarded inside—the Golden Scroll.

However, before Quinton can fully discover the power of this scroll, he is suddenly caught in the middle of an enemy attack. The forces of the Dark Master have come to destroy the Golden Scroll, which is the one thing that can stop them from conquering the land. Through a narrow escape, Quinton and his father flee the Keep with the special scroll in hand. But its absence from the Keep sets a new dilemma in motion—the empty fortress is now used by the Dark Master to spread an unrestrained cloud of darkness. Unless Quinton can discover the Golden Scroll’s power, and return it to the Keep, the land will soon fall under the shadow of tyranny.

In this young person’s tale, the son of a knight begins a quest in which he discovers the key to overcoming the dark forces that threaten his land.

Brandon Keilen has a background in video production involving a substantial amount of creative writing. He also has a love of storytelling and an education in Biblical ministry, both of which motivate him to share stories that illustrate the truths of life. He lives with his wife, Michaela, near Knoxville, TN.