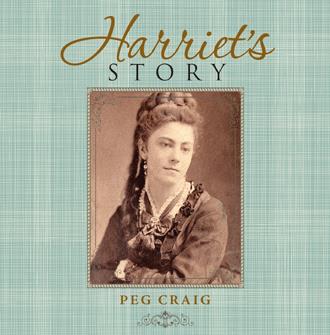 Eight year old Harriet was ready to leave. The carriage would be coming soon. Her father and stepmother had packed all they could take with them in a small trunk. War had come to Wilmington, North Carolina where her father, the Rev. Jonathan Allan Wainwright was the Rector of St. John’s Episcopal Church and they had to leave immediately to return to Connecticut. Harriet was leaving behind all her things, except her favorite doll. Her father said she could bring it if she carried it – there is no room in the trunk.

So began a family story that now spans seven generations. Pieces of it have been saved by various family members along with some remarkable photographs. But until now there has been no narrative to link these memories together. This is my gift to Harriet’s descendants as I have been privileged to have been given the pieces and have had the time and inclination to organize these memories.

Family stories are meant to be shared. Many of the stories in my family are centered on the life of Harriet Wainwright Evans, daughter of an Episcopal priest and wife of another one. She was born in Iowa before the Civil War. Her birth was the first of her adventures as she was premature and her mother died a few days later. As a child, her Yankee family was trapped in the South when the Civil War broke out. Years later, she arrived in Chicago while the Great Fire was still smoldering. With her father and husband, she lived in a variety of parishes from Connecticut to Montana. She quietly touched the lives of her children, grandchildren, students, and the people in the churches where they served. This book is a gift to her descendants to encourage them to continue to answer God’s call to service.

Many years ago Peg Craig became the family historian and began collecting memories and materials from older relatives and visiting places where her ancestors had lived. Many stories and pictures came from the scrapbooks of her great-grandmother’s sister. Peg finished her career as an adult literacy teacher and began writing for local newspapers. Realizing that she needed to share the family stories, she turned her writing skills to weaving them into a narrative centered on the life of her great-grandmother. She wants Harriet’s descendants to know about the lives of their ancestors and also hopes to inspire others to explore their own family histories and find ways to collect and pass these memories on to the coming generations.