Whimsical Tales for Youths and Old-Timers 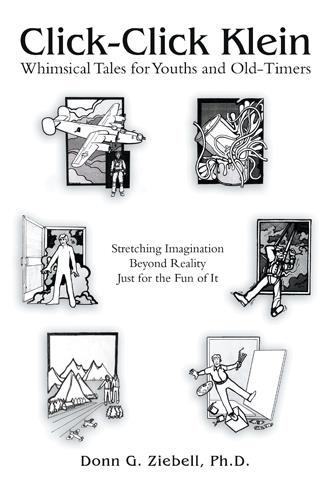 Later, when it was time for J.R. to go home, Boe told J.R. he planned to leave around 4:00 p.m. the next day and drive his family truck over to an old neighbor’s house in the woods. He said Deet Dutt was one of the more interesting men from an old Tennessee pioneering family. But Boe’s real motivation was twofold: he also wanted to see Deet’s 19-year old daughter, Cutie. Besides, she was a great cook, and it would be around dinner time when he arrived at the Dutt home. Boe invited J.R. to join him, and the young man jumped at the chance.

It wasn’t often a vehicle approached Deets’ rustic cabin; so, when Deet saw a truck coming down the road, he ran out to meet the visitors. He was wearing large bib overhauls, whitish, long-sleeved underwear, and was clean shaven. His big smile was just as Boe remembered it, and he boomed in a strong voice, “Boe! Boe Klein! I’m so happy to see you all!”

Deet didn’t know J.R., so Boe introduced him. Deet was all smiles, like a happy, excited dog wagging its tail and showing its teeth. “Cutie is not here, but you’re just in time for supper.” Fresh white smoke curled out of the stovepipe chimney, and three excited hound dogs howled from the porch. Deet invited the “boys” in, and the hounds followed.

J.R.’s attention was drawn to the flickering kerosene lamps and three long rifles on the wall. He looked at a dead butterfly in an Indian arrowhead collection and at the stretched hides of three deer and one black bear hanging stretched on the wall on each side of the fireplace. A stuffed raccoon and a turkey buzzard stood on the fireplace mantle.

“Is spaghetti with tomato sauce all right with you tonight?” asked Deet. Although disappointed, Boe said that would be fine. Heat was radiating off the cast iron stove. Deet had set a large family-size can of store-bought spaghetti on top of the stove.

KABOOM! All three men hit the floor. They heard little sipping sounds for an instant. “Darn!” shouted Deet. “I forgot to punch a steam vent hole in the can of spaghetti!” The can had exploded, and now the reddish spaghetti noodles hung from places all over the ceiling and walls, and some were on the floor.

Deet, hospitable as always, said, “Lord, thank you for Boe and his friend’s visit tonight and for our time and supper together. Amen.” He handed forks to his guests and declared, “Let’s eat spaghetti together wherever we can find it!”

The three men walked over to the wall and, using their forks, began eating spaghetti off the log walls. The noodles were cold by the time they started picking off pieces twelve inches down from the ceiling. Once they were eating from the walls at about waist height, Boe and J.R. observed that the hound dogs had finished licking the floor clean. Wagging their tails, the dogs started eating their way up the walls as the men ate their way down.

Bouncing their way back on the gravel road at 8:00 p.m., Boe reassured J.R. that, if Cutie had been home, they would have had a great meal. J.R. remained quiet for a mile before he agreed and said he wished she had been home too. Then J.R. added, “I realize I just witnessed hospitality from Deet’s heart. I’ll never forget that!”

His air corps bomber crew had cause for naming him Click-Click. Raised in Shoelace, Tennessee, flashbacks of earlier whimsical life events are told to his crew during the odd events he faced or created.

Grandpa Silly, Rufus, and Deet Dutt have roles in Click-Click’s life that will repeatedly stretch one’s imagination joyfully beyond reality, like when a can of spaghetti dinner explodes in a log cabin and everyone is handed a fork or how Click-Click faced and solved a morality concern when his bomber crew chose a name for their bomber. Never a dull moment exists as different tales of adventure continue with each turn of the page. What would you do if your buddy had a life-threatening experience at 18,000 feet and started talking backward? Or what if a bear is charging you and your friends in the forest? You must learn these things to survive and to continue living a joyful, healthy, and fulfilling life to be able to share life lessons learned with your closest friends.

He was born into a Midwest scouting family enriched by faith and educated mostly in the Midwest. He keeps the “priorities” of faith, marriage, family, country and career, in that order, Both world-view and experience is reflected in his oil paintings and books to convey ideas, imagination, and explorations for entertainment and enjoyment.