Muslims: 5 Biblical Essentials Every Christian Must Know and Do 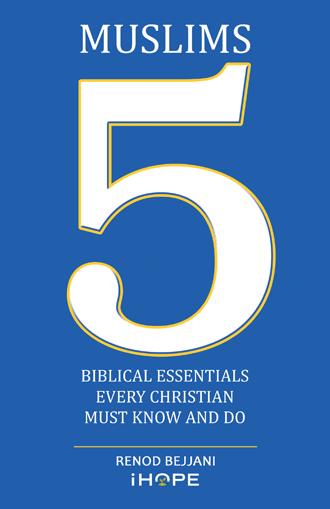 Growing Up among Muslims

I grew up knowing who Jesus is, and still, for the first forty-five years of my life, I felt as if something was missing. I sensed that I was not fulfilling God’s primary purpose for my life, but I wasn’t sure what that really meant. Like many Christians, I was unaware of the problem the Christian response to Muslims poses for our world. God changed all that around 2008. The following story is a brief explanation of how God helped me understand my purpose as a Christian as well as revealing the global problem and why I needed to be part of the solution.

My Christian-Lebanese parents married when they were sixteen and eighteen years old. My father had dropped out of school at fourteen to help support his family. He worked in construction, and after my parents married, they left Lebanon and lived wherever my father could find work—which meant they were moving from one Islamic nation to the next.

I was born in Iraq in 1963. For most of my childhood, we lived in a country where the population was 90 percent Muslim and 10 percent Christian—a country that had been predominately Christian fourteen hundred years earlier. Today, it’s estimated that only less than 1 percent of the population of Iraq is still Christian, and over 99 percent is now Muslim.Even though we lived in a Muslim culture, my mom wanted to make sure I grew up as a Christian. Every day she read the Bible to me, taught me Christian songs, and prayed with me. She also took me to a church that had a charismatic preacher. I was in awe of that preacher and the passionate way he shared the gospel. I was so impressed that I tried to imitate him. When I was four years old, I would stand in front of our home and “preach” as loudly as I could. I do not remember the words, but I think I repeated things I heard in church or that my mom had read to me from the Bible. I was not intentionally trying to share the gospel; I was a child imitating an adult who had made an inspirational impression on me. Whatever words I said, I tried to speak with as much enthusiasm as our preacher at church did.

One evening I was “preaching” in front of our home while my parents were inside preparing dinner. Suddenly, a man grabbed hold of me, covered my mouth so I couldn’t scream, and abducted me. In the darkness, he took me to the rooftop of a building and tortured me. After repeatedly abusing me, he picked me up and held me upside down by one ankle and dangled me over the side of the building, acting as if he was about to drop me to my death.

He shook me and whispered angry words at me so he would not be heard by the neighbors. I have no idea how long he held me there; it felt like eternity. Inexplicably, he then got very still and quiet. I do not know what changed his mind and kept him from killing me—but he pulled me back in, tied me up, and left me on the rooftop of that building. After much struggle, I eventually freed myself and found my way home. I still remember the chaotic scene I found when I stumbled through the doorway to my house that night. Friends and neighbors had gathered, and my mother, understandably, was crying hysterically, pleading for someone to find her missing son.

When we later moved to North Africa, we lived in Libya. The country was Christianized through 640 AD but now has only one hundred thousand Christians living in it (mainly non-Libyans); 97 percent of the population in Libya is Muslim. In Libya, I continued to go out in front of our home wherever we lived and preach as loudly as I could—which didn’t make me any friends. In fact, I was attacked, beaten, and sexually assaulted on at least eight separate occasions by different Muslim men. As they abused me, they called me “kafir.”

As a child, I simply associated being tortured with being called kafir. It wasn’t until I was eleven years old that I learned that kafir, which is sometimes translated as “infidel” in English, means “unbeliever.” It is used the way a Christian might use the word pagan to refer to an unbeliever who is polytheistic or worships more than the one true God. To these Muslim men, I was an infidel, a kafir, because I did not believe in the God of Islam. Finally, I understood that Muslims (at least those who had attacked me through the years) viewed me as a blasphemous kafir, deserving of torture, even death. As you can imagine, I grew to fear Muslims and became incredibly angry with them, even hating them. I viewed Muslims as my enemies and as the enemies of Christianity.

My rage against Muslims intensified in April 1975 while I was living in a Muslim part of Beirut. That’s when the Lebanese Civil War began. Miraculously, I survived the extreme dangers of being a Christian “enemy” in the war between Christians and Muslims. But as I watched the guerilla street warfare around me, my hatred for Muslims grew.

In September of 1976, at the age of thirteen, I traveled alone to the United States of America as an international student.

The statistics are alarming: Islam is growing while Christianity is declining in Western nations. Unknowingly, most Christians are contributing to this problematic trend. Muslims: 5 Biblical Essentials Every Christian Must Know and Do brings to light five simple actions that Jesus taught, modeled, and commanded of his followers. These principles have proven to be the most effective way to engage Muslims, used by thousands of Christians with extraordinary success.

If you are concerned, or are simply curious about Muslims, this book will equip you with the right words and practical steps to make a difference in your own community.

After enduring intense persecution as a Christian raised in Islamic countries, Renod Bejjani spent 24 years filled with anger toward God and hatred toward Muslims. Through his redemption journey, he had a startling discovery: the Middle East and North Africa experienced a mass shift from primarily Christian to 99% Muslim, and a similar shift is happening in Western nations.

In 2011, Renod started iHOPE Ministries (iHOPEministries.org) and found himself serving the God he once denied, extending God’s transforming love to the very people he once hated. Renod’s unique childhood and decades of experience with Muslims prepared him for this time in history, for this specific task.

Renod has inspired thousands of Christians as a dynamic guest speaker. His powerful stories and principles have empowered individuals around the world to help reverse the alarming trends described in this book and make a Kingdom impact for future generations.