Coexisting in a Religious World of Divide

A Journey of Faith in Christianity and Judaism 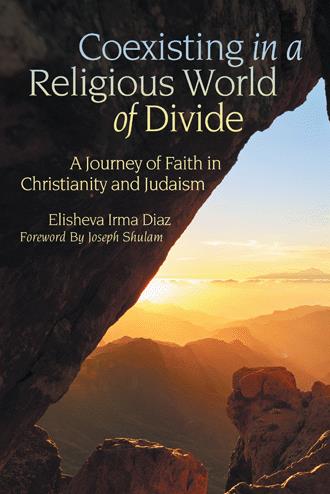 “The extraordinary twists and turns of the spiritual journey of Elisheva Irma Diaz reflect and illumine the tumultuous era in which we live. The universally recognized border separating Judaism and Christianity is now a blur. Elisheva’s story shows that the insecurity that has ensued may also open us up to unimagined blessing.”

As powerfully quoted by Joseph Shulam in the foreword of this book, “There are medical books written by doctors who have researched, studied issues, and gained knowledge in their professional capacity. However, very few of these medical books were written by doctors who themselves have experienced the illness in their own bodies”.
This author’s journey to reclaim her Sephardic Jewish heritage led her on an adventure that began in the early nineties with a full-time Christian ministry that eventually propelled her into a powerful ten-year insightful journey. She went from an ordained Pastor of Pastors with a successful ministry into Judaism and soon after her transition, enrolled herself in formal rabbinic studies and was ordained a Rabbi in 2012. Through this spiritual journey filled with intense study and spiritual experiences, she writes what some may think, but would most likely never say. She has further concluded without a shadow of a doubt that both Judaism and Christianity are broken but God has chosen to dwell in them both. She is quick to confess, “Christianity and Judaism broke my heart, yet, both Christianity and Judaism brought me closer to the knowledge of God”. Blessed be He!

Elisheva Irma Diaz, BAJS, MTS, DD (a.k.a. Dr. Irma Elizabeth Diaz), is an International Author, Public Speaker and lecturer very well known for her spiritual gifts and communication skills. In addition to her other ventures and far reaching interfaith ministry, she is in charge of the Bereavement Department for Emanate Health Hospice and home care, (previously Citrus Valley Hospice and Home Health) which is affiliated with Emanate Health; Queen of the Valley Hospital, Inter-Community Hospital and Foothill Presbyterian Hospital in the San Gabriel Valley, California.

As a young adult, she entered the political world, serving in a grassroots congressional campaign, which after a victory opened many doors to her in Washington, DC. The height of her national experience was during the Ronald Reagan and George H. W. Bush White House years, where she worked with the transition teams and the public liaison office. Later her love for God launched her into a large full-time ministry, where she built a team of forty pastors and leaders, planted churches and developed a consistent global following.

Through her travels as an author, a public speaker, and the producer of her own international television program that aired for fourteen years, she has continued to touch many lives. Her experiences in government opened doors in South America, where she visited and was hosted annually for fourteen years by Brazilian government leaders to address members of parliament, including those of the United Nations. She was honored by the legislative body there for her social (tikkun olam) contributions to the country of Brazil throughout the years 1997–2010. She has received commendations from Los Angeles mayor Garcetti for her work in Jewish education (2013) and from the Los Angeles County Board of Supervisors for building community (2013), as well as a certificate of appreciation from the California State Senate for work in preserving Ladino legacy (2013).

As a bat anusim, Elisheva (Irma) was always interested in Israel and diligently studied the Torah, Jewish sacred writings, and ancient Jewish literature while she served as the leader of her own Christian ministry. She discovered more about her mother’s family’s roots during the time of the Spanish Inquisition and began to fully embrace her identity as a Sephardic Jew in the late nineties. She formally returned to her Jewish heritage through Judaism in 2009. It is her experience living in both worlds that has caused her to arrive at what cannot be denied: both Judaism and Christianity find themselves broken, and God chooses to dwell in them both.

Elisheva holds a master’s degree in theology and a doctorate of divinity from Covenant Life Theological Seminary in Gainesville, Georgia. She furthered her education with rabbinic studies, graduating in 2013 from Gratz College (a private coeducational Jewish college in Melrose Park, Pennsylvania). In May 2013, she was awarded the L. Bernard Rabinowitz Memorial Award for unique leadership commitment and service to Jewish institutions, both religious and secular. She is currently the vice president and cofounder of the Coalition for Sephardic Hispanic and Ladino Legacy based in Los Angeles and is the president and founder of Ayekah Jewish Foundation, an organization focusing on repairing the religious divide between Judaism and Christianity.

For more information or to schedule Dr. Diaz to speak at your next event, email her at Elishevairmadiaz@gmail.com or ayekahinfo@gmail.com.
Visit our website: www.elishevairmadiaz.com