"A Parable of Love & Forgiveness" 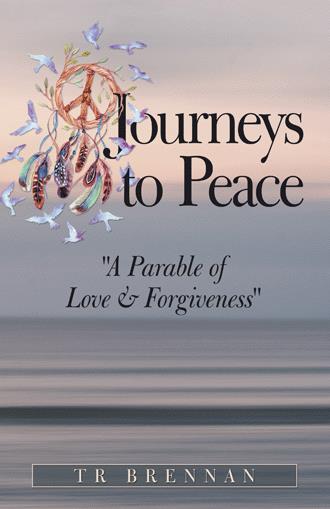 I fondly remember Mr. Bob Castleman. He was a gentlemen’s gentleman. He was a good man, a godly man. He cared about people and had a heart of grace like none other. His only purpose in life was to serve God and love His people—unbeknown to most. He accomplished this through his ministry, which was his life.

I met him long ago during a most difficult time in my life. I had everything but felt like I had nothing. I was alone, with no hope, no joy, and no desire to continue on living in the empty void people called life. It was Mr. Castleman who turned my life around. He taught me about faith, hope, and the unconditional love of a Savior.

Bob Castleman lived a very simple life and had minimal needs. He lived in a small cabin on the outskirts of a little town in New Hampshire. To get to the cabin, you had to carefully cross a wooden plank bridge over a brook. As you stepped, peering through the cracks underfoot, you would see the water rushing over stones and massive rocks. You could feel the water splash up onto your feet, which created a sense of being baptized by God Himself.

The lush forest that covered the bridge leading to the north entrance of the cabin created a canopy of green. Maples, mighty oaks, white birches, and pines all intertwined with colors and majesty. It felt as if you were entering into a very sacred place adorned by creation made just for you.

The cabin was concise but livable. One large room consisted of a sitting area, kitchen, and small table. It also had an attached sunroom. The small bathroom that was in one corner had an eco-friendly peat moss toilet and a large claw-foot tub that got filled with buckets of warm water. The walls were adorned with pine boards, which created a warm and peaceful atmosphere that one could feel as soon as they entered. Under the window benches were book-shelves that were filled to capacity, though the only book ever seen lying out was the Bible.

Mr. Castleman had no need for a regular bed because he slept peacefully and soundly wrapped in the weaving of his Mayan hammock. He compared it to the cradling of a mother’s womb or being wrapped in the arms of His loving Father.

Across the room was a small cassette player that would quietly fill the air with the sounds of native flute and nature music. “Tsa’ne Dos’e played one of the best versions of ‘Amazing Grace’ I have ever heard,” said Mr. Castleman one day.

The room smelled of herbs, spices, and essential oils, gifts from the earth provided by Father God. In sight were various stones—amethyst, pyrite, rose quartz, citrine, turquoise, and celestine to name a few. They weren’t used for “rituals” as some have taught and corrupted; they were just reminders of the beauty and creation of God’s handiwork.

One stone in particular looked like a big rock, but when you looked on the inside, you saw beautiful white crystals that had formed. Mr. Castleman used it as a tool to show what we look like on the outside, compared to the beauty that God sees created on the inside.

The cabin was situated high on a hill, which was evidenced in the shortness of breath visitors experienced hiking up to the wooden bridge. To the east, past about an acre of woods, one could see the beating of massive ocean waves which had carved out bluffs uniquely designed by Creator.

To the west, once down a steep bank, one could see a pond that was continuously filled by fresh spring water. The pond was surrounded by cattails dancing ever so slightly in the wind. The water was stocked with bullheads and gold-fish. It always amused me when Mr. Castleman would bring out some fish food and call the fish to eat. Each time they obediently came to the surface and gobbled everything in sight.

The pond was adorned with pink and white lily pads, and one could see the herons quite often enjoying a fish dinner. Around the edges of the pond were three benches in different areas. Next to one bench there was a beautiful purple beebalm bush, and if you sat quiet long enough, a humming-bird would stop by for a drink of sweet nectar.

Another bench was under a willow where the birds would stop by and sing you a song. The third bench was sitting in the open, directly in the sun and moon light where nothing was hidden in the shadows and the warmth of the sun was like a hug from Creator God. Beyond the pond in the far distance was flattened land as far as the eye could see which was filled with wildflowers, bobolinks, swallows swooping and gliding, deer, coyotes, and an occasional fox.

On the south side of the cabin, the woods were dense and the air was filled with the scent of pines. The woods were alive with song and activity from chickadees, veeries, pileated woodpeckers, squirrels, and chipmunks and a nightly hoot from a barred owl. At the largest tree, a white pine, there was a bench where you could sit and rest your head upon the massive trunk. The stories of the ancient tree were endless, always giving glory to God. It was never worshipped, as some have claimed.

The north, south, east, and west directions were meditative areas where one could sit and talk to God. Each area was unique and would help heal past hurts, as I would later learn from Mr. Castleman.

Journeys to Peace follows a young Native woman as she journeys from hopelessness to love and then to forgiveness, not only for herself but also for a forgotten people, the First Nations people.

It is a parable for those who are lost, unloved, bitter, angry, hurt, and living with no hope. It is for any and all people who have been subjected to unjust treatment for the mere fact they existed and were in the way.

May this parable bring a new hope. May you be renewed with a desire to live life to the fullest and accomplish that which Creator God ordained for you. You are his unique creation. You are loved. May your life be filled with many journeys to peace.

TR Brennan has a Master’s in Ministry in Christian Counseling from International Seminary, Apopka, Florida. She also was the recipient of the Alex Haley Journalism Award in 1995 from Utica College of Syracuse University. Through her personal experiences and research, she was drawn to the plight of First Nations people and has developed a unique perspective on what it will take for people to heal individually and collectively and, in turn lead the healing of our nation. Her passion is writing and helping people find their purpose and paths to peace. She resides with her husband in Upstate New York with their dog, Sarabi and cat, Isaiah, on fourteen acres that they call their Promised Land. They like to hike, kayak and walk the land observing all of God’s creation and enjoying the blessings of where Abba Father has placed them.