The Other Side of the Fence

Be Careful What You Wish For 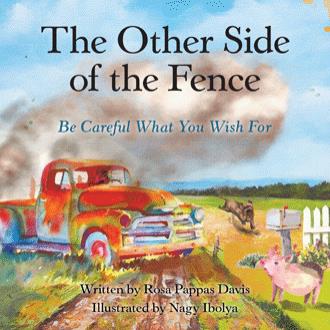 Get off the road!” Waggles continued to howl at the top of his lungs, while trying to get away himself from the oncoming car.
Waggles barely escaped the fast moving black rubber tires of the oncoming car. He almost hid his eyes, afraid of what he would see when he looked again. He was terrified of seeing his little pink friend beside the road, struck by the vehicle.
The truck did not stop, but continued on down the road, maintaining its speed. Waggles searched the dusty air and the road, listening for squeals or seeing his friend cast to the side of the road.
“Bob! Bob! Where are you?” Waggles stopped and listened. “Bob, where are you? This isn’t funny! Come out, come out!” Waggles pleaded. He listened again intently, but no answering call came. Where had Bob gone? “Oh no,” he wailed. “Where had Bob gone? Was he caught on the front grill of the car? Had he been squashed under the car?” Waggles began to whale even more as he realized the terrible possibilities. Bob had not been alone anywhere but his house, his porch, his owner’s living room, only safe places.

Often teachers, counselors and parents are searching for something that will peak their children’s interest and teach an important lesson. This book is entertaining, suspenseful and entertaining. Just as the subtitle states “Be Careful What You Wish For”, often one gets much more than one bargains for.

This book is also designed to be used to help children understand the concepts of forgiveness and grace in the religious perspective.

Rosa Pappas Davis is a Specialist in school psychology in Texas schools. She received her undergraduate degree at Eastern New Mexico University and master’s degrees from Stephen F. Austin State University and Sam Houston State University.
She maintained a private practice in counseling for 20 years while also working in the school systems around East Texas. She helped start several agencies to assist abused and neglected children such as Family Outreach and The Kalin’s Center. She published literature for the Methodist Church and research while attending SFA, however The Adventures of Small Fry and Tadpike: Friends Forever is her first children’s book. This book is a social statement that teaches children that we should accept others who are different from us because we have much to learn from one another. Her publication, The Other Side of the Fence is also a children’s book. Rosa is most proud of her wonderful family and feels very blessed to have her husband, three children, their spouses and 7 grandchildren. She is also blessed to have wonderful friends and coworkers who have supported and encouraged her writing. She continues to work in her local church and work in the public schools in East Texas. Rosa and Dan reside in Nacogdoches, Texas.