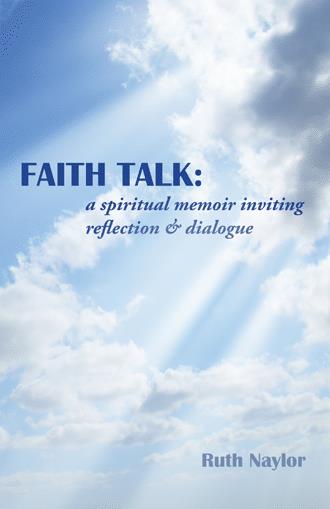 Dad’s new wife did not like for him to be reminded of us and never permitted him to visit us.

While I hardly knew Dad, Grandpa and I were the best of friends. He never seemed to tire of having me around. Some of my favorite memories had to do with his letting me help him at home count the weekly change from their business and package it in paper rolls to take to the bank on Monday mornings. He also kept cartons of Clark, O Henry, and Baby Ruth candy bars handy which helped nourish our already sweet relationship. Even after I was married, I always greeted him and left him with hugs. He called me his little girl. I knew that in his heart was a place I’d always belong. But we had never discussed matters of faith. In my eyes, Grandpa was a good man; he just wasn’t very openly religious. He went to meeting, but I never heard him speak about God.

Of course, I saw him much less after I went away to boarding school and college. And after I was married, Dad, his wife Lois, Grandma and Grandpa moved to California and purchased houses across the street from each other in Pasadena. Being that far away and now that my siblings and I were grown and on our own, Lois felt less threatened, and she permitted Dad to extend an open invitation for us to visit them and my grandparents.

It took a few years for us to even consider that financially, but eventually we established a vacation fund and planned to drive across country during the summer between our daughter’s 2nd and 3rd grade school year.

At Christmastime we received word that Grandpa was not at all well and probably would not live until summer. I felt an urgency to see him again and talk with him before he died. Mother had long ago told me that Grandpa blamed himself for Dad’s philandering. To make a long story short Grandpa had earlier had another woman too. He was seldom available when Grandma needed him to help out with their eight growing children. It was not until Dad got involved with Lois that Grandpa saw the impact of his example and he did a complete turn-around. Mother told us that Grandma had benefited greatly as a result Grandpa’s remorse.

Mother was glad for Grandma, but it didn’t ease her own pain. Dad did not turn around. Grandpa spoke to Mother more than once about the guilt he bore regarding our family’s plight, but he never talked with me or others about it. If, indeed, he was still carrying that burden, I wanted to help set him free before he died.

We made immediate plans to fly to California. By this time, Lois was providing meals and daily household help for Grandpa and Grandma. I told my prayer group about the conversation I wanted to have with Grandpa and asked them to support me in prayer while we were gone.

Dad was eager to show my family all the exciting tourist sites in their area. He took us to see Hollywood movie sets, the street of stars, and he pointed out the homes of famous people. One day we watched floats being made for the Rose Parade and visited the Rose Bowl stadium. On New Year’s Day he took us to the big parade in all its floral and royal glory. We were seeing Grandpa and Grandma at the beginning or ending of each exciting day as well.

In the wee morning hours of our last full vacation day, I awakened and realized that I’d been so wrapped up in activity and so tired at the end of each day that I hadn’t found time to have my private talk with Grandpa. Worse than that, I’d forgotten to keep praying about it. I could hardly believe that I’d been so distracted by being with Dad, and having him be with my little family, that I’d neglected the most important reason why we’d made the trip earlier than previously planned. I remembered my support group back home and took some comfort in the fact that they were probably being more faithful than I. I asked God to open a way for me to reach Grandpa’s heart. I knew I was going to have to be alert to an “open door” because Dad had a full day planned for us at Knott’s Berry Farm.

When we got up that morning, Lois informed us that Grandpa was feeling less well than usual and planned just to stay in bed all day. There was my “in.” I went to his room, cheerily kissed his forehead, took his hand and knelt beside his bed so we could talk. After a bit of small talk, I told him that Mother had told me about his sense of responsibility for our broken family. I wish I could recall and record the actual conversation that we had, but I will always remember and cherish the feelings that accompanied the words. I know that this visit was about forgiveness and God’s grace. I also thanked him for playing such an important role in my life. Tears washed both his eyes and mine. Still on my knees, I prayed briefly aloud –straight from the heart. Dad called from the kitchen asking if I was ready to leave for the Berry Farm. –And we were on our way.

When we returned that evening, the first words out of Lois’s mouth were, “Ruth, what on earth did you say to your Grandpa this morning? After you left, he got out of bed, got dressed and went to mid-week meeting.” Clearly, she was astonished by what had happened. Her question, however, appeared to be rhetorical and I didn’t need to answer. I felt that Grandpa had been reconnected in a new and freeing way with his Creator. He surprised us all by living for several years after that.

The author’s original intent in writing this memoir was to reflect on her life and share personal stories of faith with her children and grandchildren. She writes of prayer and of God’s often unrecognized availability, presence, and providence. A writer-editor at one Christian Writers Conference examined the developing manuscript and encouraged her to add questions at the end of each chapter, directing reader reflection and extending the book’s usefulness far beyond just family.

A contemplative Quaker upbringing created keen awareness of the Holy Spirit and established a mystical foundation for the author’s life, helping her understand what it means to be in an active living-loving relationship with God, a channel of divine love such as revealed in the life and teachings of Jesus.

Each chapter has its own theme, and the stories are not always in chronological order because some themes recur over a lifetime. The author shares openly the highs and lows of her less-than-perfect life—things not uncommon to humankind but which are seldom subjects of conversation in our fast-paced, secular world. The stories reveal vulnerability and challenges to faith as well as affirmations. Poems and prayers, written at or near the time of the unfolding stories, plumb the depths of the author’s experience.

Questions at the end of each chapter are similar to those a spiritual director might ask to invite consideration of one’s own spiritual journey—where faith has strengthened them, where it has faltered, or where it has invited new growth.

Ruth Naylor, teacher, poet, pastor, and spiritual director, graduated from Olney Friends School (Barnesville, OH), Bluffton College/University (B.A.), and Bowling Green State University (M.A.). After a mid-life career change, she studied at two seminaries and completed a two-year course with Shalem Institute for Spiritual Guidance. Her poetry has appeared in many periodicals and has won a number of awards.