Who Is Your Brother in 1st John? 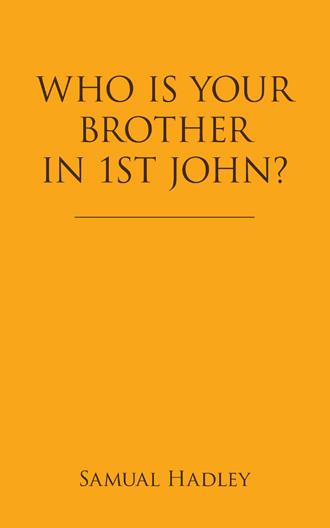 Look at the Odds

Let me prove this in another way. When I was searching for the truth in Christ, I read several books. My favorite authors were Lee Strobel and Josh McDowell. In Lee’s proof for creation, he borrowed from Josh the story of how he hired a mathematician, and then took all the proofs for God, did the math and showed the astronomical odds as proof. In that light, I shall proceed. I’m not hiring a mathematician, I’m just going to use some odds most can understand and call it good enough.

These are solid proofs from the Word. One, John is “the Elder”, and all the Elders were present. Two, John wrote Gaius of the Bible in Macedonia. Three, is Gaius took in the Brethren. Four, is Gaius supplied the needs of the brethren in Corinth so they took nothing from the Gentiles. Five, is the brethren testified and we can name them. Six, is the Demetrius in the Bible knows Gaius of Macedonia. Seven, is John knows that Gaius knows Diotrephes and would be aware of the situation and the reason for his coming. Eight, is that Luke writes about Gaius and Demetrius at a later date, and the story fits the letter of 3rd John. So, what are the odds of John calling himself the Elder, for the title of the letter, instead of say, the son of thunder, or the one Jesus loved the most, or the Apostle or the Apostle that leaned on Jesus breast, or Bergones, or John, or flash, or John the Apostle? If you play the lotto, you pick five numbers out of eighty and then you pick one more number out of the same eighty. The odds of you winning are twenty-nine million to one. So, what are the odds of John calling himself the Elder and not something else? And him writing to Gaius, not Alexander or Peter, or any other name; how many common names could there be? At least a hundred, or two or three? And what are the odds of Gaius taking in the brethren, instead of feeding the poor, or fishing, or teaching? How many different things could he do; say thousands? And this thing be of joy and walking in the truth, instead of say, something else? And what are the odds he made it so the brethren didn’t need to take anything from the Gentiles; say instead of just food from the Gentiles, or new believers or from Jews or from women, or foreigners? Hundreds? And what are the odds the brethren testified just this thing and not oh, let’s say that Paul was a good tent maker, and it was actually heathens, or children, not brethren; what are the odds? And the odds that Demetrius is really David, and he testified that Mark or Stephen or any other name than Gaius, what are the odds? And that all this testimony and names and places fit the story written by Luke, well now, what are the odds? And John says he’s going to visit the region of Gaius instead of say, Rome, or Galatia, or any other area; what would the odds be? The possible different scenarios for every one of these questions are rounded at way more than eighty different choices. There are more than six proofs. If six from eighty is twenty-nine million to one, then I guess by evidence standards, the odds of me being wrong and the scholars being right, is not good for the scholars. Look at all the options that John could have added or changed to this letter. Any one of them could bring doubt, but the fact is, there is no doubt. The odds are more than twenty-nine million to one, by Biblical evidence that the letters were written in the fifties AD. But as strong as the evidence is for the fifties date, the church refuses to accept it, because of the alibi.

Just like in the made-up story, this alibi that scholars believe; that 3rd John was written in the nineties by old man John, is what is needed to convict the Gnostics of the crime of denying Christ in the Bible. In the made-up story, the alibi had to come from someone of authority to make the prosecuting attorney overlook the truth. In this case, we’ll say it was his boss, the district attorney, and that is why the alibi in the made-up story has so much weight. The alibi in real life, for the late date of the Epistles, comes from high sources also. Scholars, commentators and Church leaders enforce this alibi, and the whole world believes it, and amazingly, the most read book in the world is misunderstood.

Did it Happen two times?

When you can see there are no Gnostics in the Bible, and the Epistles of John were written in the fifties, then the Word starts waking up. Your staring right into that fishnet with all the mess, but your still not sure what you’re looking at. Your halfway there to seeing what I’m seeing. Two more discernments to go.

Scholars won’t read this book because the author lacks credentials, and his source of proof is from the Bible. Preachers won’t preach this book because it’s not from the gospel of the scholars. But the Bible-toting Christian who actually feeds on the Word of God is about to get served the meat platter. Hope you’re hungry!

Truth can be a tricky thing. There is Biblical truth and worldly truth and they never say the same thing because they come from different leadership. My focus on specific Biblical subjects without the hindrance of the academic conditions allows me to see things in the New Testament that scholars cannot. Charles Darwin said the theory of evolution would be proven by the fossil record. That didn’t happen, yet an academic believing in creation is considered foolish because of proof from Darwin. Every student of the Bible is taught a scholarly opinion as Biblical truth about the Epistles of John. That scholarly foundation is a theory that this book destroys. You wouldn’t expect a Darwinist to write a thesis promoting creation and you can’t expect the literary genius of John to be discovered by a Bible scholar. My uneducation qualifies me as the perfect writer. I’ve been a truck driver for the last twenty-five years for the same company, so by worldly standards that’s what I am. I have a wife and almost all adult kids, and I have hobbies that consume all my spare time, and that also defines who I am. And I have another job working for Jesus Christ. He let’s me hang out in the truth department. I’m about as deep as a small shallow puddle in the road, and Jesus likes me!