If There Is a God, Shouldn’t He Be Able to Get the Creation Story Right?

by Dr. Barry A. Bunting 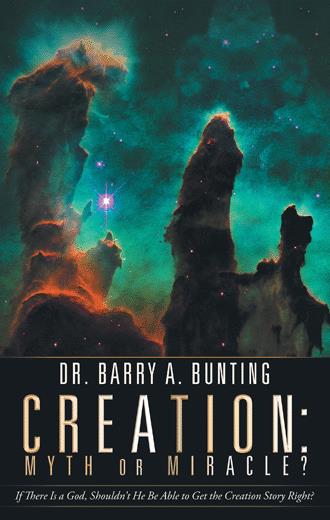 The Power of One

Genesis 1:9 And God said, let the waters under the heaven be gathered together unto one place and let the dry land appear, and it was so.

Genesis 1:9 (With added Hebrew translation detail): And God said (commanded), let the waters [“waters” is actually singular in the original Hebrew] under (at the bottom, below, underneath) the heaven (sky) be gathered (bound, collected) together (united) unto one place (locality) and let the dry (ground coming out of water) land (firm earth) appear (be seen), and it was so.

A careful reading of this short verse reveals two rather startling statements.

First is the comment regarding land being produced from out of the ocean — “ground coming out of water.” Note, II Peter 3:5, which we quoted earlier, also said something similar — “Earth standing out of water.” And Psalms 90:24 says — “mountains were brought forth.” Yes, these seem like simple facts, facts we were taught in some of our first science classes in grade school - land formed from volcanic activity (Biblical; “mountains brought forth”) and from the Earth’s crust pushing up from below the ocean (Biblical; “ground coming out of water” and “earth standing out of water”). But remember, the Genesis account was written over three thousand years ago. There were no science teachers, or geologists, 3,500 years ago!

Second, this verse not only says “ground coming out of water,” but it also says the waters were gathered “unto one place.” So, the Bible says when dry land first appeared out of the water there was only one ocean. Try to visualize this for a moment - land and one ocean.
So, how many continents would there be at this time in Earth’s formation — according to the Bible?

Multiple continents? If there were multiple continents at this point in God’s formation of Earth, there would be multiple oceans. There are currently five oceans, depending on who is counting. Note, Genesis also says, “land.” singular, not “lands,” plural.

So, what is being described here is a single ocean and a single land mass — one continent!

If you know anything about Earth’s proposed geologic history, you may be as shocked as I was the day I first realized the significance of the word one at this point in the Genesis creation account! I don’t know who the father of geology is, but I am sure he was not alive and publishing studies on volcanic activity and continental drift research 3,500 years ago! Twentieth-century geologists, who had no clue whatsoever the Bible already said this, concluded only in the last 100 years that there was a time in Earth’s history when there was --- one ocean ---- and one land mass. They have dubbed this landmass a “supercontinent.” Some have even penned a variety of names for it, Columbia, Rodinia, Pangaea.

Earlier I mentioned we believe Moses was simply writing down what God told him in the Genesis account. This “earth coming out of water” detail is another example of something Moses was incapable of understanding fully (geologically) as God was telling him what to write. Of added significance is the fact Moses lived in Egypt and parts of the Middle-East where there were no volcanoes forming landmasses in the middle of bodies of water. Imagine someone who lived in desert countries all his life trying to wrap his mind around this “ground coming out of water” idea! He would be familiar with water coming out of the ground, but “ground coming out of water” would have made no sense to him. I can imagine Moses questioning, “Ground out of water?” “Hmm?” “Ok, I have no idea what you are talking about, but ‘yes I am writing it down.’”

So, Genesis told us over three thousand years ago when solid earth was first formed there was one continent, surrounded by water.

It is conceivable for someone to guess there was a beginning to the Universe. There is a 50-50 chance of getting this right! And perhaps someone could, purely by chance, correctly guess the general order of a number of the major astronomical events we have commented on so far. But by no stretch of the imagination would someone making up a creation story 3,500 years ago conceive, let alone write down as fact, that there was a time when there was a single land mass surrounded by one ocean.

You might be interested to know how geologists have also concluded there was a time when there was a one continent world. Geological studies of the ocean floor have revealed the current continents are slowly drifting apart from each other by a few inches every year in the middle of the Atlantic Ocean. So, they have concluded, if we could wind the clock backwards far enough the continents would come back together and at some point in the past there would be only one land mass, just as the Bible says! There is some disagreement among geologists as to the exact process by which this one supercontinent was formed but the best evidence is magma (molten rock) erupted from the ocean floor through volcanic activity and the formation of land in this way would best be described as - - -“ground coming out of water.” And molten rock in contact with oceanic water would vaporize water and contribution to atmospheric water, two events being accurately, and directly, connected at this precise point in the Genesis account! Lucky guess? Coincidence? Or textbook stuff?

I hope it is becoming clear the Genesis account is neither the hopelessly inaccurate myth some would have us believe, nor a vague allegorical tale!

Perhaps you were impressed with the handful of things the Qur’an got right. How does this compare with Genesis? We are only a third of the way through the Genesis account and here are the things it has gotten right so far: 1) A beginning when science thought there wasn’t one, 2) light in the Universe prior to stars, as implausible as this sounds, 3) revolving celestial bodies when the Bible “supposedly” preached a flat earth, 4) Earth becoming completely covered with water, 5) Earth described as floating in “empty” space, 6) twilight prior to our Sun becoming a star, 7) the beginning of concentrated light shining on Earth, compatible with our current understanding of the beginning of fusion in our Sun, 8) the beginning of the rotation of Earth linked with the beginning of nights and days, and 9) the formation of an atmosphere from the surface of the water, 10) by a process which was about to form land out of the water — volcanic superheating of oceanic water, which 11) formed dry land initially in the form of one continent! And, all of these events line up precisely with what science has discovered!

The question this work addresses is this: given our current state of knowledge, are any of the major religion’s creation accounts accurate, or are they all myths and fables that don’t hold up to close examination? This work makes three assumptions.

Assumption no. 1—If there is a creator and he provided a creation account, then he should be able to get it right. After all, he was supposed to be there!

Assumption no. 2—If there is a creator, then one of the four major religions, each of which has survived a thousand years or more, is the most likely place to look for a legitimate creation account, a message from our creator. It is safe to say any creator capable of creating us and the universe we live in should be capable of accurately revealing his existence.

Assumption no. 3—If we do find an ancient (pre-science) creation account that makes a substantial number of scientific, factually accurate statements—not just a few lucky guesses—but facts that were unknowable at the time the account was written, then we can reasonably conclude there must be a creator who revealed these facts.

Dr. Bunting is an award winning author of over a dozen scientific biomedical journal articles and brings that scientific perspective to a study of the “conflict” between science and religion on the subject of creation.