Chosen to Witness His Greatness 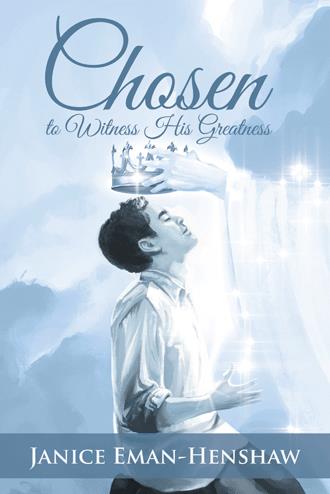 p>The Bible says that when a believer speaks in tongues, he is not speaking to any human being, but he is speaking only with God. He does not even understand those spiritual words that he is speaking. However, by faith, we believe that we are releasing words that are making a transformational impact that is without boundaries in the spirit realm, manifesting itself in the physical realm in our favor.

A Christian filled with the Holy Ghost who practices speaking in tongues will have a radiance and strength about him that is unexplainable. Why? Because as you speak in tongues, the presence of God becomes overwhelmingly powerful over you. It ignites the fire! The Holy Spirit is the power that causes you to be even more zealous to tell others about Jesus and to do it effectively.

You will speak prophetic words, as the Holy Spirit will share things with you that otherwise you could not have seen.

I want to share a revelation with you that the Holy Spirit allowed me to see in the book of Luke, chapter 1. Earlier, I referenced the encounter that Zachariah had with the angel Gabriel. The messenger told Zachariah that his barren wife would become pregnant with his child and that the baby would be filled with the Holy Spirit inside of his mother’s womb. That puzzled me, because according to the scriptures, it is only the Lord who can fill a person with His Spirit.

Elizabeth was not filled with the Holy Spirit, so how could the unborn child be filled? As I continued to ponder on this, the Holy Spirit opened my eyes! I want to share what He showed me. I will need to begin by recapping a visitation that Joseph, the husband of Mary, had. The angel of the Lord had appeared to Joseph and informed him that Mary (who was a virgin) would give birth to a Son who would be conceived by the Holy Spirit, who we know is Jesus Christ.

During Elizabeth’s sixth month of pregnancy, she receives a visit from Mary, who is now pregnant with Jesus. Upon Mary’s arrival, she greets Elizabeth, and the baby jumps inside of her womb, and immediately, Elizabeth is filled with the Holy Ghost. Wow! How many times have I read Matthew and Luke’s account concerning this encounter, without recognizing the depth of what the Lord is showing us? Please bear with me as I explain further. I want you to see what I saw.

Do you remember the scripture in John, chapter 1, that says, in the beginning was the Word, and the Word was with God, and the Word was God? Well, in the fourteenth verse of that chapter, it also said that God manifested Himself and became flesh as the only begotten Son. All things considered, Mary, who was filled with the Spirit of God because of the fruit inside of her womb, spoke by the Spirit. I want to be clear in saying that Mary is not a deity. She was a mortal human being with human parents. God chose her for His purpose. In the same way, He has chosen you and me for His divine purpose. Let’s continue.

When Mary spoke, filled with the Holy Ghost, Elizabeth received and was also filled. The scriptures continue by saying that Elizabeth spoke out in a loud voice. I have the scriptures posted below. Elizabeth, speaking through the Holy Spirit, is proclaiming that Mary is pregnant with the Lord. The Bible calls this prophesying. Soon after, Mary magnifies the Lord because she is feeling so favored that the Lord God chose her despite her status. You can read the entire prophecy in Luke 1:45–55.

angel replied to her, “The Holy Spirit will come upon you, and the power of the Most High will overshadow you [like a cloud]; for that reason, the holy (pure, sinless) Child shall be called the Son of God. And listen, even your relative Elizabeth has also conceived a son in her old age, and she who was called barren is now in her sixth month. (Luke 1:34–36 AMP)

Now at this time Mary arose and hurried to the hill country, to a city of Judah (Judea), 40, and she entered the house of Zacharias and greeted Elizabeth. When Elizabeth heard Mary’s greeting, her baby leaped in her womb; and Elizabeth was filled with the Holy Spirit and empowered by Him. And she exclaimed loudly, “Blessed [worthy to be praised] are you among women, and blessed is the fruit of your womb! And how has it happened to me, that the mother of my Lord would come to me? For behold, when the sound of your greeting reached my ears, the baby in my womb leaped for joy. And blessed [spiritually fortunate and favored by God] is she who believed and confidently trusted that there would be a fulfillment of the things that were spoken to her [by the angel sent] from the Lord.” (Luke 39–45 AMP)

The Holy Spirit is genuinely our teacher. I have shared this revelation with you so you can appreciate and take advantage of everything that our Father has given to every one of us who believes Him. The Holy Spirit is not a feeling; He is a person. He wants to do things for you and through you. You can feel His presence, but that is not what validates His being. You can talk to Him, and you can trust that He hears you. When we embrace His ability with a teachable spirit, the Holy Spirit moves freely through our lives. Your relationship with the Lord will become so much sweeter. Can you have a relationship with the Lord without the infilling of the Holy Spirit? If you have received Jesus as your Lord, ofcourse you can. But why not embrace everything He is willing to give? There is so much more God has for you.

Now, I would like to share this beautiful experience from 2012, only two months after my father passed on to be with the Lord. The significance of this testimony is that it helped me to embrace more of the Lord’s supernatural love and grace.

A beautiful Saturday afternoon, I decided that I would join two of my boys, Blaine and my other son (by marriage), Travelle, for a run/walk on the track. I had been listening to music on my headset, and I felt the emotional pains of being distant from my father. In my spirit, I was conversing with the Lord, reverently, that I understood that my dad was enjoying the glorious heavens with Him. However, I was missing him so much. I remember thinking about how things must be so lovely for Daddy and that I should learn not to allow myself to react so selfishly.

My eyes and face flooded with tears of joy and sadness all at once. I didn’t realize those types of emotions were even possible. Suddenly, my father’s spiritual body, which looked like the young version of him I had never met, appeared next to me. He was jogging! I could not believe my eyes. He said, “Hey, my babe,” in his sweetest accent. Then he zoomed ahead of me to position himself facing me; I had stopped jogging. He said, “Oh, Muttie (my nickname), it’s beautiful (he was speaking of heaven).” Raising his hands to the air in excitement, he said, “Look at me … no wheelchair!” Immediately, he flew up into the skies. He didn’t have wings, but he flew! There was not an ounce of regret on his expression, only excitement.

Blaine was trailing closest on the track, so I ran over to him and described what had just happened in so much joy. Blaine was only eighteen years old. Most likely, he didn’t know how to process all of this at once. It happened to me, and I was still trying to handle it. But I knew with no doubt that it was very real. My dad didn’t have a care in the world. Words cannot describe his presence. I was extremely happy for him and even more grateful to my Lord Jesus!

Chosen to witness His Greatness is about gaining a greater understanding of the truth that God wanted you for Himself before your existence. The book highlights the needed sacrifice of Jesus Christ as God’s overall intended plan to birth a generation of sons and daughters from His Spirit. The acceptance of God’s wisdom by receiving the final work of His son Jesus, grants any human being the right to live on this earth under His protection. The book highlights the importance of studying God’s word with the mindset that the scriptures are meant to reveal the evidence of His love and the enemy’s plan to distract and detour believers by using emotions, shame, guilt and even loved ones to cause Christians to question the righteousness that is given free in Christ Jesus graciously.

The author shares the challenges she faced throughout her younger years in life and into her adulthood of not knowing what to believe about who God is. She did not have a mentor to teach her how to read and apply the Bible in her life contextually. Intentionally, Janice conveys to her readers the struggle of emotionally wanting more in a relationship with the Lord, but inadvertently feeling guilty of not knowing how to achieve it. She shares supernatural encounters from the Lord in spite of her unfavorable behaviors. Her writing displays the love, grace, and mercy of God despite our failures.

Janice is agressively active in ministry and is known for ministering the love of God consistently into the homes of believers/nonbelievers, hospitals, churches and workplace. She conducts regular prayer meetings, bible studies, orchestrates outreaches throughout her community, and has received numerous testimonies of miracle healings as a result of her spirit-filled prayers. Her goal is to help believers to embrace their uniqueness and to allow the Holy Spirit of God to build them through His written word in love.

To learn more about the author, visit her author website;