Sixty Miles to Be Baptized 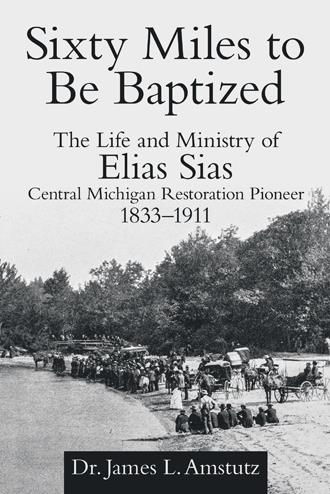 The lumbering industry played a huge role in the early development of Michigan. During the middle 1800's the lumber trade contributed to the industrialization of Michigan through steamships and railroads. It also helped advance the cause of the Restoration Movement.

Edwin Errett noted that “a group of business men, all members of the church of Christ, conceived the idea of organizing a lumber business, purchasing a tract of timber in the center of the state and taking into their business as a silent partner a Christian minister who would locate on their property and proceed to establish a church of Christ in this virgin territory.”

The minister they chose for this position was 35 year old Isaac Errett. Errett viewed this as a call from God. Against the advice of his friends, he turned down a lucrative offer from a church in Springfield, Ill. and moved his family into a log cabin 30 miles north of Lansing.

The lumbering business failed and Isaac’s family was plagued with illnesses. He continued to build a church in the local schoolhouse. The community would eventually be named Muir and the impact of Errett’s determination upon the churches in mid Michigan would be huge.

Ben Soule, known as “Uncle Ben,” one of the partners of the lumber company, eventually became an elder of the Muir congregation. As previously noted, Uncle Ben baptized Elias Sias and would play a large role in the beginning of the first churches of Christ in central Michigan. All of this was the result of an entrepreneurial evangelistic spirit of a few businessmen.

The baptism of Elias Sias is marked as the beginning of the churches of Christ in the Pine River township. In 1856 a Bible School was started in the home of A. V. Packer. The Bible School was eventually moved to the schoolhouse that had been erected at Curtis Corner (Forest Hill). Elias was not satisfied with simply a Bible School in the community. He wanted a church and he wanted to take an active part in that church.

After baptizing Elias, Mr. Soule agreed to come to Gratiot County and baptize the others who were waiting. Within four weeks Elder Soule arrived in St. Louis, and the remaining group of eleven were baptized. It is at this point where the historical records are in conflict with each other.

The Forest Hill church history says that Elias went from house to house announcing that Mr. Soule was coming and the gospel would be preached and a church would be started in the community. Settlers came together for a meeting which resulted in organizing a church of fourteen members in early 1859. Soule could not stay with the infant church and returned home to Muir.

In the last half of the nineteenth century, Central Michigan was coming to life. The logging industry brought many in search of employment. Settlers came from the east looking to make a new start. In addition to their belongings, they brought their religion. One man was determined to share his faith with all who would listen. Elias Sias would lead hundreds to Christ and start numerous Christian congregations until the day he died. He was a spiritual pioneer as well as a community leader.

Jim Amstutz has been the Senior Minister of East Superior Christian Church in Alma, Michigan since 1998. He received his education from Great Lakes Christian College, B.R.E. (1987); Emmanuel School of Religion, M.Div. (1992); and Harding University Graduate School, D.Min. (2002). His passion for the Restoration Movement started early while growing up in north central Kentucky. Living an hour away from the Cane Ridge Meeting House Shrine in Paris, Kentucky, he made frequent trips to the shrine with his parents.

Serving in located ministry for over twenty five years, Dr. Amstutz has been dedicated to preaching and teaching the principles of the Restoration Movement in the congregations he has served. He has written articles for the Restoration Quarterly and the Christian Standard journals. In 2011 he wrote 100 Years of Faithful Service a history of East Superior Christian Church.