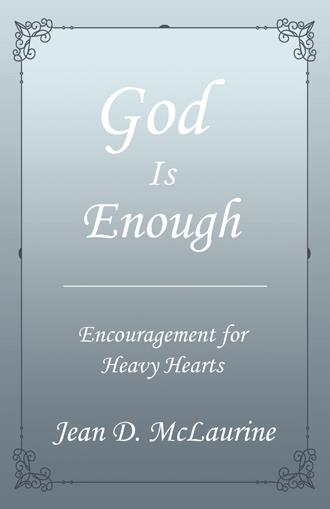 Several years ago, while I was recuperating from lung surgery I had a lot of time to think about what I would do with all my tapes and notes that seemed so valuable to me. I began to write these messages down and it came to me that someone else could benefit from them also. It didn't seem to be a book at first but as it began to grow it turned into a book which is written in loving memory of Mrs. Ollie Hough. I first met her at the home of my dear friend Kathryn Knight in Nashville, TN when she was visiting here from Africa and various other places in the 1970’s.

During World War II, this humble servant was not only a great bible teacher but a prayer warrior that spent much time in Knoxville organizing prayer groups. There were so many desperate times during those years and needs that only God could meet. People would go into these meeting places asking for prayer. They spent many hours in prayer and much of the time they would stay all night.

I was really blessed when she would spend time teaching and praying with the group in Nashville. What I would like to do in this book is to show in my small way what she firmly believed to be the trouble in so many lives. Mrs. Hough would say that we do not really know God. We know about Him and we read the scriptures and we think we know Him, but are we really trusting and living in obedience to His will? How much time do we spend praising and thanking Him for all His blessings? We call on the Lord in times of trouble, but we don't always allow Him to direct our lives. To know the Lord is to love Him and put Him in first place. This will transform a life, and it will bring about an intensified awareness of God's presence, an eagerness to hear and read the Word and a dedication to intercessory prayer. God yearns to show us His power in our time just as He did in days of old. I hope these truths will increase every reader's faith in the many promises of God. May it bring joy, peace and encouragement to all heavy hearts.

In the hand of every redeemed soul, God has placed a key that will unlock the treasury of heaven and bring to our lives the unlimited resources of God. This golden key is prayer. Prayer is the mightiest weapon that God has given to man. In the Word of God, we read that prayer made a way through the Red Sea and brought mighty deliverance for the children of Israel. Prayer closed the mouths of lions, quenched the fury of fire, stopped the sun in its course, held back the rain on the earth for the space of three-and-one-half years, brought the dead back to life, and brought countless other miracles.

In the twelfth chapter of Acts, we read that stone walls, double chains, soldiers, keepers, and iron gates all gave way, and the mighty Roman Empire as represented by Herod was rendered absolutely impotent before the power of prayer — the key that releases the mighty power of God.

Since it is true that God has placed this key in the hands of all believers, why are so many weak and defeated? Why are so many fearful and anxious? Why are their lives so powerless? The answer is three-fold. In the first place, many neglect to use the key.

and it will be given to you” (Matt. 7:7). How sad it is to see God's children weak and defeated, trying to stand in their own strength and to solve their own problems they bear their own burdens even when God has said, “The Lord is at hand. Be anxious for nothing; but in everything by prayer ... let your requests be made known to God” (Phil. 4:5–6 NKJV).

Secondly, some are not benefited by the key because they do not use it in the right way.

When you ask, youdo not receive, because you ask with wrong motives, that you may spend what you get on your pleasures. (James 4:3)

Many prayers are prompted by selfish motives, and therefore do not prevail to open God's storehouse.

In third place, many do not have the faith to wield this weapon of prayer.

And without faith it is impossible to please God, because anyone who comes to Him must believe that He exists and that He rewards those who earnestly seek Him. (Heb. 11:6)

Faith is the force that turns the key. Lack of faith is due to a need of the Spirit in our lives, for “so then faith comes by hearing, and hearing by the Word of God” (Rom. 10:17 NKJV). Faith is produced by the Holy Spirit in an obedient heart.

Dear friends, if our hearts do not condemn us, we have confidence before God and receive from him anything we ask because we obey His commands and do what pleases him. (1 John 3:21-22)

From these and many other passages of Scripture, we see that it is the one who is living on a high spiritual plane who has power in prayer.

Our greatest need today is the kind of praying that Daniel did to shake the Babylonian empire. We need persistent prayer like the widow where the judge had to arise from the bench, postpone business, and attend to her urgent needs. This is the kind of prayer that is born in the very heart of God's Word, and it is the only weapon we can use today to touch the invisible foe! We may never know until we reach eternity what we have been spared through the ministry of intercession.

Remember the prayer that Elijah the prophet prayed at Mt. Carmel.

Answer me, O Lord, answer me, so these people will know that you, O Lord, are God, and that you are turning their hearts back again. (1 Kings 18:37)

We may need to call down showers of blessings upon God's people who are in such dry and barren situations. Believe that God's will is being done according to the greatness of His power and wisdom. Don't under estimate God's ability to make a way for you when one doesn't seem possible, but believe like Abraham.

Yet he did not waver through unbelief regarding the promise of God, but was strengthened in his faith and gave glory to God, being fully persuaded that God had power to do what he had promised. (Rom 4:20–21)

May God help us to yield to Him and be so filled with His Holy Spirit that we can pray with a faith that will be an irresistible force.

God is Enough is written to help you create a prayer life that will last a lifetime. Jean McLaurine shares from her personal experiences how daily looking to God will supply strength and peace for each day. Prayer is a foundation stone of the Christian faith and a ministry that will bless you in obedience to the Lord. She shares with the reader how a personal prayer life will help you live with a purpose and a bright promise for tomorrow.

Jean grew up in a small town in North Carolina and lived through the depression, a time of great hardship. During World War II at the age of 16, she went to work at a military base in Norfolk, VA, experiencing the greatness of the American spirit. After the war, she married a veteran and helped him through school on the GI bill. They landed in Nashville, TN in 1959 where she still resides. It was there that she met friends that discipled her in Christ, which helped her to value the strengthening power of prayer. She says that it is this practice that has guided her through the struggles of life, allowing her to face each day with joy and praise.