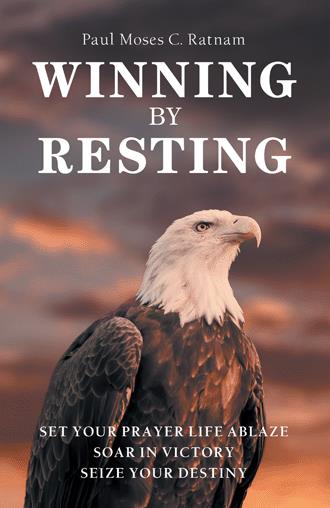 From Chapter 1 - The Art of Waiting on God

The Making of Spiritual Giants

But those who wait on the LORD shall renew their strength; they shall mount up with wings like eagles, they shall run and not be weary, they shall walk and not faint. (Isaiah 40:31)

When everything else you do drains energy, there is one way to build strength and renew it – to wait on the Lord. Many think that taking much time for prayer is for those few who have the gift of prayer. It all depends on what lifestyle you want to have - a tired, hopeless one or the one in which you keep going higher all the time. The eagle is one of the special creatures mentioned in the bible. It is strong and majestic. It sees the prey from a great height and goes for it with accuracy. It waits for the air current and climbs higher with less effort. It flies above the storm. Most of all, it spends time alone and renews itself. It lives a life that is not accessible to the enemy.

God likens His children to the eagle. He wants to renew your strength everyday. The way to start renewing is by waiting on the Lord. When you are feeling tired inside, it is time to jam the brakes and set aside a time for waiting on the Lord. Such pause from the regular chores of life is not going to make you lose anything. It is the only way you let God come and reign in your life. At the same time, you are energized for greater efforts and heights. You are ready to fight the battle with new strength. It makes the devil pushed back till he loses confidence.

Look at Jesus as a 30 year old Son of Man ready to begin the assignment of His life. He humbled Himself in the waters of baptism though He was without sin. He was filled with the Holy Spirit in the Jordan though He was conceived by the Spirit. Then He had to wait in the wilderness for 40 days though He was God in flesh. He fasted and prayed in the midst of wild beasts. Nothing could distract Him. In the end came the spiritual battle with Satan himself. The outcome of the battle revealed His set priorities for the rest of His ministry – His love for sustaining Himself by feeding on the word of God, His heart to never tempt the Lord God by crossing the lines drawn by His Father, and His zeal to see God alone to be glorified and worshiped (Luke 4:1-14). When the battle was over, the devil left shamed and defeated. Angels came and ministered to Him. That day was the beginning of heavy angelic activity in His ministry. It never ceased throughout the next 3 and ½ years. Above all, He returned from the wilderness with power. He was not the ‘carpenter’s son’ anymore. He manifested Himself as the Son of God with power (Rom. 1:4). He was the great Eagle soaring high. Miracles began to happen wherever He went. His fame spread through the entire region.

Staying in His presence makes you receive your strength. Then you go on from strength to strength endlessly. Wiser are those who know the secret of waiting, for they shall never become tired. After waiting comes mounting and flying. Nothing can stop them. They move in regions unknown to the human mind. They are hidden from the devil’s eyes. They do not know exhaustion because they know when it is time to get back to waiting. They are strong always, for waiting is a regular part of their lives like that of Jesus.

Chapter 10 – Praying For Others

Yet now, if You will forgive their sin — but if not, I pray, blot me out of Your book which You have written. (Exodus 32:32)

The only man who can get closer enough to God to discuss, debate, question and even dare to have a difference of opinion with Him is the praying man. All others resign to be ‘dumb spectators’ who think everything that happens is God’s will, when they could have actually altered destiny through prayer. Truly the praying man alters destiny. Prayer shapes destiny. Prayer puts God to work and keeps Him working endlessly till the job is done. (Isa. 62:7) Prayerlessness spoils the plan of God. God loves to be confronted by the man who watches at His gates. The heart of the praying man is wired by the thoughts of God and it beats in God’s frequency. God esteems such a man.

God would let that man corner Him for the sake of the people, even when they have failed Him sorely, as when Moses interceded. Just see how much a praying man is worth in the eyes of heaven. God will decide the survival of a nation in response to Moses’ prayer. And He would repent of the evil He intended. He would calm down and listen, when this man speaks. He would change His mind for the good.

He places him across the table and shares His secrets and discusses His mandate concerning nations with Him, as He did to Abraham. Abraham’s opinion on Sodom’s destruction was more vital to God than the reality of Sodom’s wickedness. God would not, and very reverently, could not, ignore the friendship He shared with Abraham. Abraham could not be bypassed concerning Sodom and Gomorrah. How much power a praying man has with God! He is a covenant keeping God and He would not overlook a man who is alive before Him through the covenant of prayer (Gen. 18:17-33).

He would let Elijah the mighty man of prayer demand fire from heaven. He would turn around the years of drought within a few hours when this man bent his knees to travail as when a woman gives birth. These saints prevailed through travailing prayer. They paid a high cost in their lives earning intimacy with God through prayer and then expending such royal privilege on intercession for the welfare of mankind.

“Prayer puts God to work and keeps Him working endlessly till the job is done.”

“The man who wrestles in prayer before God flies high in life’s situations.”

“The power of your prayer lingers on. It goes beyond time to bless.”

“God has ordained prayer as the ultimate pathway to possibilities.”

When you feel your back is against the wall, each door you find gets slammed on your face, your health and finances hit rock bottom, there is pain in the heart, and you see distress around. They say: nothing much could be done.

In the pages of Winning by Resting, Paul Moses C. Ratnam takes you through a journey of raw inspiration from scriptures and life about the one unstoppable force available to man from God, which transforms doom to glorious destiny—prayer. As a man given to prayer himself, he shares his insights that will help you to

— rise from the struggle in personal prayer,

— seize your destiny beyond the pain of your past,

— hear the voice of God in your spirit,

— tap into the privileges and be in charge of the miraculous, and

Paul Moses C. Ratnam is the pastor of the Fountain of Compassion Church in Trichy, South India. He has been serving the Lord passionately for the past 20 years as a song writer, worship leader, conference speaker and author. He has written several books, including Exposing Fear And Eradicating It, You Want God To Change His Mind? Refresh Your Praise Memory, How To Handle Your Victories? The Answered Prayer and Lord Change Me Today (annual daily meditations). He and his wife Preetha are blessed with three energetic children, Joshua, Chris and Jeduthun. Together they make their home in Trichy, South India.