CHILD OF GOD or CHILD OF THE DEVIL?

The Bible says we are one or the other! 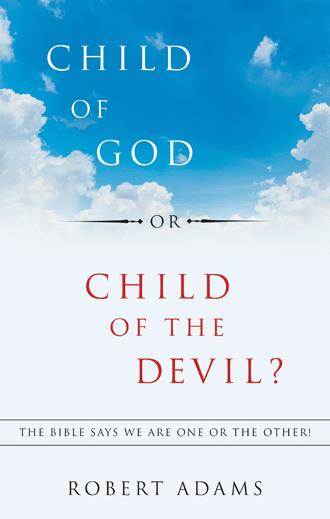 In the November 2007 issue of Daily Bread, the devotion for the 18th started this way:

“An old spiritual warns, ‘Everybody talkin’ bout heaven ain’t goin’ there.’ Heaven is God’s dwelling place where His presence and glory are manifested in all their splendor and where He will enjoy His children for eternity. He has the sovereign right to determine who will be admitted and under what conditions. He has made them clear in the Bible, and Jesus confirmed them when He was here on earth. Any other beliefs about the requirements for admission into heaven are incorrect.”

There is a lot of good theology in that quote. And, “Everybody talkin’ bout heaven ain’t goin’ there,” could be a paraphrase of what Jesus said in the following Bible verse.

“NOT EVERYONE WHO SAYS TO ME, ‘LORD, LORD,’ WILL ENTER THE KINGDOM OF HEAVEN . . . MANY WILL SAY TO ME ON THAT DAY [THE FINAL JUDGEMENT], ‘LORD, LORD! DID WE NOT PROPHESY IN YOUR NAME, AND IN YOUR NAME DRIVE OUT DEMONS AND PERFORM MANY MIRACLES?’ THEN I WILL TELL THEM PLAINLY, ‘I NEVER KNEW YOU. AWAY FROM ME, YOU EVILDOERS!’”—(MATTHEW 7:21)

Notice that these people called Jesus, “Lord.” It is the word used by Christians who say that Jesus is not only their Savior but their Lord - Master over their lives. These people obviously considered themselves Christians if they were calling Jesus, “Lord,” and doing their works in His name.

Next, the things these people were able to do must have confirmed in their minds that they surely were given powers by God reserved only for those who were His children and on their way to heaven.

Surely they thought, and so would we, that anyone doing any of those things in Jesus’ name was truly a child of God on his way to heaven. So, we must never rely on what we do in God’s name that seems to have God’s approval or His power on it as assurance that we are one of His children and on our way to heaven.

In addition to what Jesus said in Matthew 7:21, He must have considered it an important lesson as three times in His parables he repeats the same idea. It is that some people look like, talk like, and act like they are true Christians or children of God but they are not. We need to reflect on what Jesus says in “The Broad and Narrow Road,” “The Wheat and the Weeds,” and “The Seed Sower,” parables.

Are we one of those who thinks they are a Christian but are not? What does Jesus say are some additional requirements besides belief in Who he was, and what He did for us. Let’s list all the prerequisites and requirement according to Scripture for becoming a child of God and then examine ourselves to see if we have met all of them. And if not, let’s see how we can act on and commit to them. 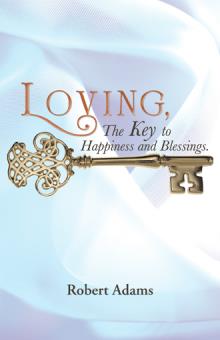 Loving, The Key to Happiness and Blessings.
Robert Adams
$17.95

Today many churches have embraced “easy-believism” – mental assent to all the facts about Jesus will get them to heaven. They say they believe, have faith in, or have put their trust in the following Scripture.
“GOD SO LOVED THE WORLD THAT HE GAVE HIS ONE AND ONLY SON THAT WHOEVER BELIEVES IN HIM WILL HAVE EVERLASTING LIFE.”
—(JOHN 3:16)(NIV)

I think these people do believe everything about Jesus from His being deity, took on the form of man, was sinless, took on their sin, was punished, crucified, arose from the grave on the third day, is in heaven now, and will be the final judge of both the children of God and the children of the devil.
However, the demons also believe everything from Jesus incarnation to the fact he will be their final judge. When Jesus approached the demon possessed man, the demons said, “What do you want with us, son of God? Have you come to torture us before the appointed time?”
—(Matthew 8:29)(NIV)

In Matthew 7:21, at the final judgement, Jesus tells people who have been prophesizing in His name, casting out demons in His name and even doing miracles in His name, “Depart from me I never you!”
We know the demons are not going to heaven, but what is missing in the lives of the people who do miraculous things in Jesus name?
Furthermore, Jesus in three of His parables tells us about people that act like, think like, and believe they are Christians – children of God, but they are not.
Believing in Jesus means not only believing in what He did for us but what He said. Jesus says there are three other things we must do to become a child of God. Other Scriptures declare other requirements for becoming a child of God.
This book challenges us to examine ourselves to see if we have met and committed to all those requirements.

Robert Adams has forty years of preaching, teaching and writing experience. He is the author of “Loving, the Key to Happiness and Blessings.” A book the teaches from Scripture how we can obey Jesus’ commands on loving God and others. Also, he is the author of “Heaven and Hell (Visited),” a fictional book with Biblical truths about both places.