I Will See You in Heaven, My Friend

The Bible Tells Me So! 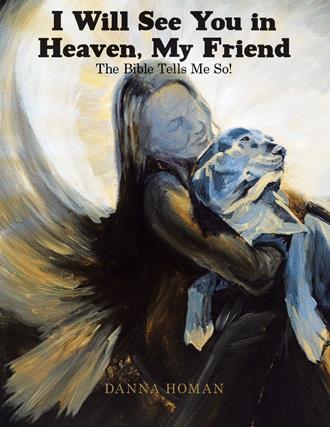 “ARE THERE ANIMALS IN HEAVEN?”

Losing a precious pet is an experience that leaves us in total grief and searching for consolation and peace.

I love the saying “Until one has loved an animal, a part of one’s soul remains unawakened” by Anatole France.

It’s so true! But when we lose them, a part of our soul is just gone. Their absence leaves a gaping hole that seems impossible to fill.

When I lost my own precious Sadie in 2014, way too early at just eight years old, I just couldn’t get my arms around it. She had been my little sidekick for eight years and losing her too soon was something for which I wasn’t prepared.

I needed to believe that she was in Heaven and that we would see each other again. Everyone talked of some “Rainbow Bridge,” which was such a beautiful thought, but I am a Bible believing Christian and the only thing that brings me total peace is the Word of my Father. That led me to look up all references to ‘rainbow’ in the Bible.

Although there was no mention of a “Rainbow Bridge,” what I DID find which I wasn’t aware of before, is that the rainbow covenant that God made with Noah WASN’T just to mankind, but to ‘every living creature’ that was with him! It was a covenant between God and ALL of His creation!

So what exactly what is a ‘covenant?’

God made a promise to animals!

Not a passing, changeable, fickle promise. But an ETERNAL, binding promise!

If they are temporary, why would He make a promise to them?

If He didn’t love them, why would He make this everlasting covenant with them? Not a temporary promise, but an ETERNAL one.

That got me so excited that it inspired my journey to start at Genesis and walk through the entire Bible to see what God says.

There’s man’s ‘opinion,’ usually based on emotion, and then there’s the truth of the Word of God. I prayed that He would open my eyes to the truth, and it was in this journey that God revealed His faithfulness and love, not just to me and all of mankind, but to the animals that clearly bring Him much joy. As we are created in His image, I now see that He gets as much joy from this aspect of His creation as we do! What a happy thought!

I get asked this question so often that I decided to share the answer and hope that it blesses all who read it.

“The righteous care for the needs of the animals, but the kindest acts of the wicked are cruel.”

Why would our Father call it ‘righteous’ to care for animals if He didn’t care about them????

We are created in His image and were given an awesome responsibility to care for all of which God entrusted to us. So I am ever amazed when someone asks me how I can be “so sure” that God loves animals and that they are in Heaven.

I understand the question from those who don’t consider the Bible to be the eternal, inerrant Word of God; however, for those who do call themselves “believers,” how can one “claim” to love the Lord and not love everything He loves? How can one “claim” to know the Scriptures and ever doubt that God has an eternal plan, not just for mankind, but for ALL of His Creation?

How can God speak life into something, bless it, and call it “good;” yet, many have come to the conclusion that it isn’t?

Or that it isn’t valuable to the Creator?

Or that it’s temporary?

God is a God of the eternal…not the temporary.

“Are there animals in heaven?”

Losing a pet is an experience that leaves a gaping hole in our hearts. I find that just talking about a rainbow bridge doesn’t really help. It is a beautiful thought, but I am a Bible-believing Christian, so that led me to look up all references to rainbow in the Bible.

Although there is no mention of a “rainbow bridge,” what I found was that the rainbow covenant God made with Noah wasn’t just to mankind but to every living creature that was with him! It was a covenant between God and all of his creation! God made an eternal, binding promise to animals!

If they are temporary or if he didn’t love them, why would he make this everlasting covenant with them? That inspired my journey to start at Genesis and walk through the entire Bible to see what God says. I decided to share the answer and hope that it blesses all who read it.

Danna with Molly, who was physically and emotionally abused for over three years in a puppy mill. Shortly after she rescued Molly, Danna was diagnosed with cancer. Danna persevered in giving Molly the love and encouragement she needed to heal, and in turn, Danna credits Molly with helping her survive the rigors of cancer treatments.

Since that time, Danna has rescued several dogs and helped them to find their forever homes. Not only is Danna passionate about animal rescue, but also about getting laws and regulations passed regarding animal welfare.

Danna is a graduate of the University of Alabama and has built a successful career in the cardiovascular medical device industry. She currently manages a sales team for a Fortune 500 medical company. Danna lives in Birmingham, Alabama with her three rescue dogs, Maxwell, Bella and Gracie.