Standing on the Promises

Essays in Honor of Stephen C. Brown and Wesley A. Ross 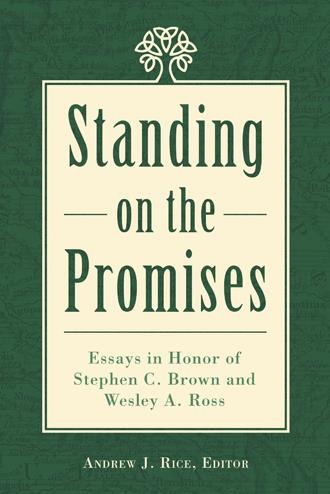 The Apostle Paul writes to the church in Philippi of two brothers and fellow workers, praising them for their faithfulness to the Lord and sacrifices for the Kingdom. Moreover, he enjoins the believers to “honor such men” (Phil. 2:29). In the spirit of this exhortation, we have published this volume to honor the faithfulness of two of our own who have completed thirty years of dedicated and fruitful service through the founding and leadership of the Berkshire Institute for Christian Studies.
To be sure, though we desire to honor Steve and Wes, our highest praise is fixed upon God Himself. We give honor to men and women who have responded to God’s call and used His gifts for the sake of His Kingdom, but ultimately the One who calls and who gives gifts deserves the glory. As Paul said to the Philippians in closing, “To our God and Father be glory forever and ever. Amen” (Phil. 4:20). This is our ultimate aim in publishing this book: to glorify God for all He has done through these two faithful servants.
One of the earliest mottos of BICS was “Why not now?” This same refrain prompted this project and has carried it through to completion. Why wait to honor the lives and legacy of Steve Brown and Wes Ross? Why wait to “honor such men”? Some time ago I was struck by the words in the preface of a similar volume written to honor the life of Dr. James A. Nichols, Jr.—one who profoundly shaped the theological scaffolding of both Steve and Wes: “We regret that he did not live to see [this book’s] completion.” Though aware of the project, Dr. Nichols never experienced the joy of holding in his hands a visible reminder that his labor was not in vain, that his message was received, that his life’s investment was worth it. By God’s grace, Steve and Wes, and all who take up and read this book, can be sure that the wonderful theological heritage of BICS will not soon be forgotten.
To that end, the essays in this volume seek to honor these men by reflecting on various aspects of their theological and ministry commitments. By publishing this book, we are attempting to preserve and pass down the deposit of truth that has been with BICS since its inception. In his final President’s Report to the BICS Board of Directors in October 2018, Steve wrote, “My only prayer is that BICS will remain true to the Word of God and honor its theological heritage as passed down to us from Dr. Nichols through Fred Ehle and Oral Collins.” Perhaps, through this volume, God is beginning to answer that prayer.
In light of that heritage, we’ve tried to capture various points of emphasis that are core to the BICS philosophy and theological DNA. We have called upon the help of contributors who understand well the ethos of BICS and whose lives have intersected with Steve and Wes in different ways—as colleagues, mentors, friends, and alumni. We hope that the diversity of style and voice will mean that every reader will find something he can enjoy, or at least endure. (Or, as Wes has been known to say about his Christmas cantatas, “If you don’t like this one, hold on, because the next one will be a little different, and you just might like it even less!”) If not for limitations of time and space, there could have been other writers and certainly more topics, but we hope to have captured the essence of BICS as a tribute to its founders.
We begin, in Part One, with the writings of these three “heroes”—Dr. James A. Nichols, Jr.; Dr. Carl F. Ehle, Jr.; and Dr. Oral E. Collins. The content of these chapters was carefully chosen to reflect the interests and passions of each. These three men sowed “seeds” that fell on fertile soil, and that grew and bore fruit decades later.
In Part Two, we’ve sought to capture the most salient theological commitments, the “roots” from which BICS and its students derive strength and vitality. Chapters on the nature of Scripture and the centrality of God’s promises form the foundation; two chapters related to Reformed soteriology stir our hearts with gospel truth; and two chapters reflecting on Advent Christian eschatological emphases point us forward to our glorious hope in Christ.
Next, in Part Three, we walk through several important practical outworkings—or “branches”—of the faith. Here we consider the nature of discipleship, the music of the church, the importance of a biblical worldview, and the reality of suffering well as a believer in Christ.
Finally, we give just a glimpse of the “fruit” of BICS by including the testimonies of three alumni in Part Four. Representative of all our alumni, their stories weave together the themes of this book—God’s faithfulness, provision, and grace—while demonstrating the incalculable value of BICS in their lives and ministries.
Regretfully absent from this book are first-person accounts from Steve and Wes themselves. Their stories of God’s work in them and through them, their accounts of God’s gracious provision through the leanest of times, their memories of students that bring both laughter and tears, their tales of missing hubcaps and lost passports and uncomfortable camel rides—they may go unwritten in this work, but our hope is that, if nothing else, this volume prompts them to be told and ensures that they never be forgotten.

Only eternity will tell of the lives who were changed and blessed by the faithful service of Steve Brown and Wes Ross. As lifelong friends, colleagues in ministry, and co-founders of the Berkshire Institute for Christian Studies (BICS), Steve Brown and Wes Ross have pointed many students to the truth of God’s Word and urged them to take hold of His precious promises.

On the occasion of their retirement from leadership at the institute, friends, colleagues, mentors, and students have teamed up to honor their legacy. The essays in this volume are built upon the same theological foundation so instrumental to the success of BICS, a foundation that has, as its cornerstone, the blood-bought promises of our faithful God.

Friends, family, colleagues, and students will be heartened by this tribute to two men who have sacrificed greatly for the kingdom of God. More importantly, all who read this book will be encouraged to continue standing on the promises of God.

Rev. Stephen C. Brown is a founding member of the Berkshire Institute for Christian Studies and served as its President for over thirty years. In addition, he pastored Advent Christian churches in Waterville, ME and Manchester, NH. He is a graduate of Berkshire Christian College (Th.B.), Gordon-Conwell Theological Seminary (M.Div.), and is currently completing his Doctor of Ministry degree.

Wesley A. Ross is a founding member of the Berkshire Institute for Christian Studies and served as its Vice President for over thirty years. During his eighteen year tenure at Berkshire Christian College, he instructed in music and directed the college Chorale. He is a graduate of Berkshire Christian College (Th.B.) and the University of Massachusetts (M.Mus.). He currently serves as the Minister of Music at Hope Church in Lenox, MA.