The Economics of God’s Plan

A Mandate for Surplus Creation

by William B. McKee 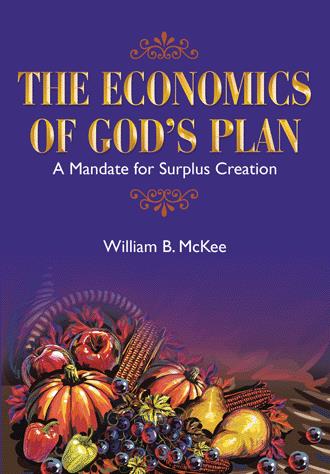 Hasn’t the Church Talked about This Before?

For it is easier for a camel to go through the eye of a needle than for a rich man to enter the kingdom of God.

Wealth and money have been subjects of church teaching from the beginning. That is because they are frequent subjects of the Bible. But the commentary has been verse by verse and parable by parable. In this book, we will discuss the lack of systematic models and the concomitant confusion that have encased the subjects for years.

The chorus of leading church voices on the subject of wealth and money does not create harmony. There are many soloists who seem to make sense when heard individually, but their voices become confusing when heard together. It can leave us conflicted and confused when we hear powerful theologians and pastors such as John Calvin say,

He furnished the world with all things needful, and even with an immense profusion of wealth, before he formed man. Thus, man was rich before he was born.

If you have been assigned the goods of this world by God and don’t share them with others, it isn’t just stinginess, it is injustice.

The Bible makes it clear that it’s just plain foolishness not to manage your money well. And foolishness never ends well. Proverbs 21:20 says, “Wise people live in wealth and luxury, but stupid people spend their money as fast as they get it” (GNT).

Those who worship money increasingly define themselves in terms of it and increasingly treat other people as creditors, debtors, partners, or customers rather than as human beings.

These voices seem to provide diverse understandings of how disciples of Jesus are to work, support their families, and provide for their retirement in the world today. If these theologians had access to a helpful economic model and a defined economic lexicon, they might find that their voices were in better harmony than it would appear.

The well-respected contributors to the Dictionary: New Testament Background, who are fair in their tolerance and inclusive in points of view, conclude, “Jesus followers are still left perhaps with uneasy consciences in times that celebrate mammon and the successes of industrial and technological capitalism.”

While an “uneasy conscience” was often precipitated by the radical teachings of Jesus in his time, it was not where he wanted his followers to remain. He wanted them to understand and embrace his teachings so they could propagate them with a clear and confident voice. He taught in parables so that his message could be grasped more quickly and repeated accurately. These goals are similar to the scientific models used today, with their defined terminology.

Many pastors feel they can dodge and weave successfully through an obstacle course of cacophonous communications on wealth and arrive spiritually intact. They typically explain how they do so in an idiosyncratic manner that does not always resonate in the experience of their hearers. This has not led to a unified stentorian voice from the church on the role of wealth (surplus) in God’s plan.

Part of the issue is that religious leaders are most often PhDs in philosophy or theology. Rarely do they hold MBAs or advanced economic degrees. Jesus told us in Matthew 4:4, “Man shall not live on bread alone, but on every word that comes from the mouth of God.” So, our religious leaders must be people trained in the Word and provide it to us. But that same passage also builds on the premise that bread is food and necessary to survive. The provision of food requires an understanding of economics.

Conversely, more people in business are trained in economics than in theology. Businesses organize and operate using terminology such as capital, costs, and market elasticity. They don’t talk much about using the philosophy of Plato’s forms or using the Socratic method to derive truth in running their businesses. Their application of theology is generally limited to secularly appropriated aphorisms such as the Golden Rule.

How did this chasm between theology and business develop? Is it as wide and unbridgeable as many today profess? Or is it a false dichotomy maintained by those who do not have a Christian worldview? Can a better understanding of biblical teachings and a modern economic explanation bring integrity to God’s plan and our everyday lives? These important questions cannot be addressed without an understanding of how the break began in the first place. It did not happen all at once. It happened over an extended period, driven by motivations that many have forgotten.

Many people who have generated surplus have used a background in economics, accounting, or business administration to great effect. It is important for them to know that using those tools is not contrary to the Bible.

For those who think there is no connection between economics and the Bible, this book says, “Not so fast.”

William B. McKee, a husband, father, grandfather, and Christian scholar, not only disagrees with this position—he explains how the false view developed.

He also shares economic models that demonstrate how the Bible has supported the creation of wealth, highlighting how money has been a subject of teaching by church leaders from the beginning.

Along the way, McKee reveals his personal story of how he turned the corporate pyramid he had lived by for so many years upside down, moving from success to significance to support people instead of having people support him. From there, it was on to seminary school.

Throughout this treatise, McKee introduces economic paradigms to help explain why God has always required surplus (wealth) for his plan. Further, he explains how surplus was initiated by God, highlighting scriptural teachings on the creation of surplus and the concomitant spiritual risks to those that have the special gift of productivity.

Join the author as he explores how creating or influencing surplus can help advance God’s kingdom with biblical insights, lessons, and cautions on wealth-building and its distribution in The Economics of God’s Plan.

William B. McKee is a scholar in residence at Valley Presbyterian Church in Paradise Valley, Arizona. He is a distinguished graduate of the U.S. Air Force Academy and earned a master’s degree in economics from UCLA. A jet instructor pilot in the Air Force, he completed a civilian career in commercial banking, venture capital, and investment banking. He retired in 2000 and graduated from Fuller Seminary in 2015, where he earned a master’s in theology. He writes on theology and teaches adult Christian education. He and his wife, Penne, have two children and two grandchildren.

Epikouros is an ancient Greek word used in the time of Homer to describe an active ally in battle. The Epikouros Fund is a self-directed 501c3 charitable foundation managed by the Arizona Community Foundation. Author proceeds from the sale of this book, and any other donations to the fund, will be used to ally with others to further the expansion of God’s Kingdom on earth.