Break Free from the Tyranny of Your Past: Your New Life Starts Now 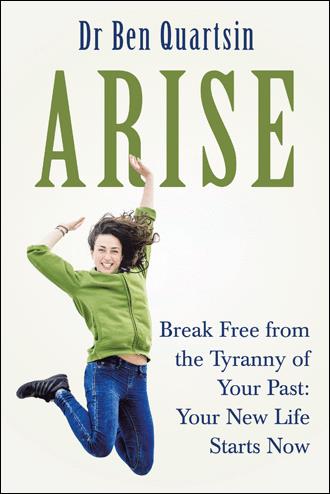 When my children were younger, I often watched cartoon movies with them. One of my favourites was Meet the Robinsons. This movie is about a boy called Lewis, who lives in a children’s home. He doesn’t know his birth parents and desires to be loved. Being a bit of a geek, Lewis likes making things, which he then shows off to prospective adoptive parents in the hope of being chosen. But each time something goes wrong. The children’s home gradually empties as the children are taken for adoption; but Lewis and his roommate Goob aren’t so lucky.

One day, Lewis makes a memory scanner. He hopes it will help him retrieve memories of his mother who abandoned him as a child. He also wants to show off his invention at a science fair in the hope of impressing a couple who’ve shown an interest in adopting him. Unfortunately for Lewis, someone tampers with the device while he’s asleep, and it malfunctions. The science fair then ends in disaster, which scares the couple away, and they decide not to adopt Lewis after all. Cruel, I should say, but then this is only a movie. Lewis is understandably upset and decides not to make any more inventions.

At this point, a boy named Wilbur arrives from the future. He takes Lewis to his future where he sees himself married and living a happy life. Lewis discovers that his future self is a great inventor, and that’s because he didn’t give up inventing things after the “disaster” at the science fair. Wilbur takes Lewis back in time and tells him not to give up his passion; otherwise, the future life Lewis saw will not materialise.

This movie depicts the way that dreams can operate. In this case, they’re a vision of what the future holds, but this vision isn’t guaranteed to happen. It depends on whether we put in the effort to realise it. By travelling forward in time, Lewis could see the kind of life he could achieve if he’d commit himself to creating it. It would mean enduring disappointments, failures and frustrations. He’d also need to avoid distractions and stop himself from being side-tracked. Only then would he fulfil his dreams. But as we shall soon see, this outcome is easier to achieve in a cartoon than it usually is in real life.

Why we abandon our dreams

If you ask a group of children what they want to do when they grow up, many will tell you without any hesitation. When a teacher asked her class this question, some of the children said they wanted to be firemen, and others wanted to be doctors, teachers, police officers or nurses. One wanted to be a car, showing the wider range of a child’s imagination.

Children understand that their lives are supposed to count for something, and their aspirations reflect this. Those childhood dreams may be a little off and lack substance, but they usually become more realistic as children grow up. The child who wanted to be a car probably has a desire to move at high speed, so his dream may well turn into an ambition to be a Formula One racing driver. But consistency in holding onto one specific dream is unusual as most children abandon those early dreams by the time they’re adults.

Occasionally, one may come across a young man or woman, perhaps a university student, who has grand ambitions and dreams. Some will talk about their desire to be world leaders or lead a campaign and make a difference in their world. It’s always heartening to know that such people still exist, although an encounter with the same person a few years later may prove a very different experience. If they’ve landed a job and are managing to pay their bills, then one may still detect in them traces of their dreams, but those that are jobless will often be despondent. Their only goal now may be to simply find a job, start earning a living and end their dependency on parents. The prospect of achieving their ambitions will at this point seem very distant.

In the case of an enthusiastic student who has abandoned their dreams, the obvious cause is an unpleasant collision with life as an adult. The challenge of finding a job in an economy where even the most experienced often remain unemployed can be blamed. But the phenomenon of abandoned dreams is far too common an occurrence to blame on a single cause. The truth is, that whether you’re struggling to find a job after school or have already secured one and you appear to be doing well, you’ve probably said goodbye to your dreams. It seems that life is designed in such a way as to rid you of your dreams at the earliest opportunity.

“You may think of yourself as being too small or insignificant to leave a mark on humanity, but you’re underestimating the power within you.”

Have you ever wished for a different life? Imagine that today is your lucky day, and your wish has come true—your new life starts now! But wait… how can you ensure that you won’t just go down the same path as before? How can you avoid your usual mistakes and seize new opportunities?

We all desire to change something in our lives—no one has lived a perfect life. But unless we discover how to break free from our old habits, our new life will barely change—our second chance will go begging. That’s because a new life isn’t created in the womb but in the mind. The key isn’t to be reborn but to learn how to go about things more effectively. That’s where this book comes in.

Not just the ordinary Self Help book, Dr Ben Quartsin has written a practical guide to tackling those bleak periods of life where you may feel stuck in a rut. Tracing the lives of two fictional characters, the author sheds light on the common mistakes we all make and presents principles to help transform our lives.

Grounded in the author’s expert knowledge of the workings of the mind and his deep Christian faith, “Arise” is both intimate and expansive, taking the reader on a journey of self-discovery and empowerment that encourages us all to be brave.

Dr Ben Quartsin is a Consultant psychiatrist based in the United Kingdom.

On completion of his secondary education in Ghana, he travelled to Poland where he obtained a medical degree from Wroclaw Medical University. This training gave him the opportunity to interact with people from all over the world.

Following his successful time in Poland, Dr Quartsin continued his postgraduate training in the United Kingdom where he currently practices with a special interest in psychopathology and psychological treatments.

Beyond psychiatry, Dr Quartsin takes a keen interest in personal development and understanding human behaviour, including the factors that influence our choices. He is genuinely passionate about unleashing human potential.

Dr Quartsin currently resides in Hampshire with his family, where he enjoys cycling and going for walks in the countryside.