Of Ecclesiastes and More

Science and Faith Unraveled in One Life 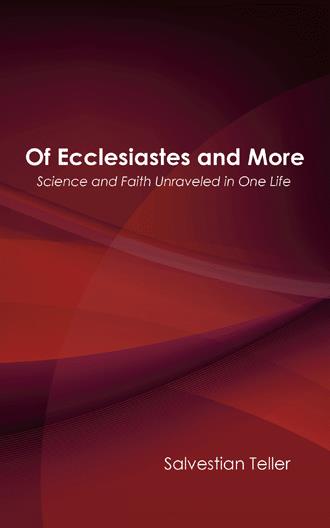 Part I A Time For Everything

Chapter 1 A Time To Be Born

Chapter 2 The Race for Technology

Chapter 4 The Imprisonment of the Mind

Chapter 5 A Time to Tear

Chapter 6 A Time to Mend

Part II The Wonder of Life

Chapter 2 The Wondrous You

Chapter 4 Ambassadors In The World

Chapter 5 The End Of Time

***
While on summer brigade in the ditches in Sofia we, the second year students punished for our rebellious behaviour, would often start philosophical discussions. What are we actually- just biological robots or something more. If our brains had a finite number of brain cells then actually we are no better than any machine with only a few neurons. We think intuitively that the more the states and the complexity of the brain network, the higher the intelligence. But what is intelligence and thinking? Turing actually defined thinking as a "Turing machine" and assumed that number crunching was all that humans were able to do in addition to their physiology and mechanics. We are opened to the outside world, which is infinite, but does that makes us smarter automatically like Turing's machine with infinite tape? After all, there has to be someone to write the program on the tape- human or another machine. Where would that knowledge come from? It could be rubbish or something dangerous, causing destruction.

A question remains, how do brain states relate to subjective mental states? Will science be able formalize and measure these things? If it ever does, will that fully explain consciousness? A valid question remained unanswered. Are there degrees of self-awareness? Humanity was not aware of the existence of harmful radiation before it discovered it with instruments. Now we are more aware of it. By analogy- is there a limit to mental awareness? Does it include awareness to the existence of a Creator of all things? And ultimately what is the meaning of our existence? Does life has meaning? As an engineer-to-be then, I believed all knowledge about the world we live in came from observation (through naked eye or instruments) and rational thinking that inferred and revealed knowledge which could be hidden- not obvious, But nothing could happen that is not based on matter, I thought. This was essentially the belief of a materialist.

We were brought up with an iron rod in a social system which believed that free trade was wrong. In our generation’s culture, trade was reduced to the transport of goods that were sold at a fixed price. In the early days of the Communist rule, trade was even considered immoral, and making a profit was equal to profiteering or cheating. There was no encouragement of entrepreneurship; private enterprise was illegal and prosecuted. Networking with people for business or any material gain in the public space was despised and denigrated to the level of nepotism.

My plight in those days was not the only one; many were in my shoes. We liked our profession and would like to see a continuation of it: jobs and prosperity in a country which had some vision for information technology. This vision was quickly disappearing. As it happened, we used to be like privileged children with expensive toys. The country needed computers, and we made them. But in the end, the rules of the game changed, and they took our toys away. We were told that we had grown up. We were given freedom and let go in the wilderness, made redundant. We had to learn to fly like birds which had grown up in a cage. I blamed myself over and over again that I did not manage to leave the country earlier.

Many were like me, people from my generation who were supposed to live the most fruitful days of their life in a system that promised equality, brotherhood, friendship, if not love, prosperity, and opportunity for all. Yet now, it looked like many were in a rush to become rich, stampeding others.

Some Christians do not like scientists because they look monstrously clever, with no heart. Similarly, some scientists dislike Christians as uneducated and dangerously fanatic. There is an unspoken, ungrounded opinion that these two categories of people are enemies. But is that true?

It has not been like that in the past, even after the church no longer exclusively owned the scientific enterprise. There have been many scientists with a Christian world view: Blaise Pascal, James Maxwell, Michael Faraday, Isaac Newton, and Gregor Mendel, to name just a few. There are still scientists with the Christian faith today, but for no reason, this profession nowadays is seen by the world as predominantly non-Christian. When a scientist starts talking about Jesus, his colleagues immediately believe there’s something mental going on. There might be God out there in the energy of the stars, they might say, but Jesus? “This is crazy. This is too simplistic, stupid,” they would say. But is it not true that scientists often go crazy, in their own way? Einstein’s theory of relativity looked crazy at first and was not accepted by the scientific community. To this, the reply was, “It is indeed crazy, but the question is whether it is crazy enough to be true.”

It is true that the majority of scientists today are materialists. They deny the spiritual realm, ignoring so much evidence for its existence. At the same time, they are reluctant to acknowledge that science has limitations and cannot provide a meaningful answer to all the questions we have. There is something in the human spirit that transcends the material world. From the moment we are physically born until we meet our Creator in the spiritual realm and establish an ongoing relationship with him, we are unsatisfied and searching for meaning and purpose. The Bible provides direction in the otherwise meaningless material world.

Was the Cold War a clash of belief systems or simply a race for technology? How did the Information Age of humankind begin at the end of the millennium? Is the evolution of species God’s awesome means of creation, or is it just a very long sequence of accidents? Is there evidence of a spiritual world beyond the material? Can science of the twenty-first century provide us with all the truth and meaning of life? The answers to these seemingly disparate questions could be found in the life of a computer science engineer who was involved in designing the first computers in his own country behind the Iron Curtain and who later emigrated to the West. His journey across technological advances, nations, cultures, worldviews, and political and social systems as they were changing dramatically at the end of the millennium is captivating.

The book considers the problems of humanity through the life of the baby boom generation during the Cold War—their upbringing and realizations, their aspirations, their challenges, their successes, their failures, and their disillusionment as they searched for something firmer to hold on to for the truth and the meaning of life. They experienced turbulence and trauma just in the apogee of their age when many are expected to bear fruit and enjoy it. Instead, they had to make life-changing decisions and dramatic moves that were very similar to the flying of an adult bird kept in a cage since birth. It was a quest for worldviews and value systems that required them to step out of the narrow profession and engage more actively with social and ethical issues in order to survive. The story is an unequivocal testimony to God’s magnificent grace to mankind.

The author is a computer scientist and engineer who was actively involved in the design and implementation of the first mainframe computers in Bulgaria during the Cold War and who later emigrated to the West. In the 90-ies he took part in designing and implementing the first commercial medical image archiving and communication systems and standards there. He is a Christian, interested in the relation between science and theology, who organises seminars introducing people to Christianity. The Author lives in the UK and is awarded a PhD in Computer Science and a second degree in Medical Physics and Engineering from Imperial College London.