Diamond in the Rough

A Journey toward Faith in the Midst of Struggle 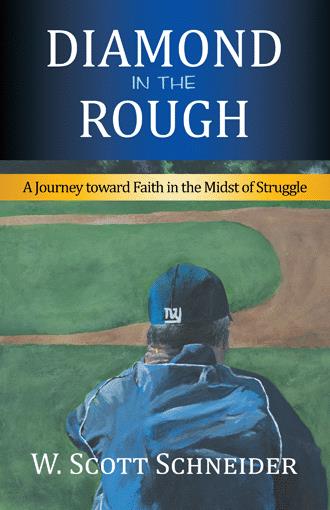 Unemployed and looking for money, the unkempt drifter would have stood at six four if hard living hadn’t slumped his once-sturdy shoulders and Marine-like frame. Unfortunately, this present condition never stopped him from operating under the false sense of authority he genuinely believed he was entitled to over his estranged, little family.

He ordered her again. “I’ll pay you back next week. C’mon!” he said, taking another intimidating step toward her.

“I don’t have it, Robert. You need to leave!” she yelled back while maintaining her ground and pointing toward the door.

“Oh no?” the bully shouted, challenging her again.

Knowing she was far too responsible not to have some cash in the house in case of an emergency, he glanced at the large dresser against the wall adjacent to the pullout couch. Topped with a jewelry box and other womanly paraphernalia, it subtly gave away that the space doubled as her bedroom at night and probably contained what he was looking for.

He headed there as she feverishly pursued him from behind. With all the strength and courage she could muster, she grabbed him as he reached the bureau.

“Don’t you dare!” she shrieked, desperately needing to hold onto the little money she had sitting in the top drawer.

Half shocked by his former wife’s apparent, though fragile, strength and confidence, the now-infuriated drunk answered with a sloppily executed military maneuver, breaking her grip and slamming her against the adjacent wall.

“You lyin’ to me, Sheila!” he yelled again, now directly in her face. His features began to monstrously distort as the spittle sprayed her cheeks.

Simultaneously, the boy wedged himself between the struggling adults to try to protect his mother. Then, with one surprisingly gigantic heave, he shoved his father hard at the waist.

The force propelled the man into a backward stumble, which ended with his tripping on the leg of the kitchen table behind him and crashing to the floor.

A quiet hush thickened the air between them, leaving all participants awkwardly frozen in an atmosphere where time felt like it was standing still. The bully paused a minute before picking himself off the ground. He was visibly shaken. After briefly gathering his wits again, he grabbed the kid-sized baseball bat he’d spotted leaning against the adjacent wall. The room became frightfully silent as he stood motionlessly, seemingly plotting his next move while the others remained fearfully still, waiting for what that might be.

In truth, the ever-decreasing and lonely world of Robert Green was becoming even smaller as his half-hungover, half-drunken senses desperately grasped for a way to stop the downward spiral that now defined his existence. Though beaten by life and the consequences of bad decisions, the square-jawed, tough-talking boozer was still strong enough to overpower the women he’d deserted and unfortunately coward enough to do it. But now it appeared that even his hold on that was beginning to falter. What’s more, a new enemy had arisen.

The once-childlike, admiring eyes of his son were now riveting into his with a brewing hatred that was becoming bigger than both of them. Robert could feel himself falling, not from without but from within as his scattered and enraged thoughts grasped for a way to regain control of the last of those who feared him, people who, but for his lost battle with alcohol, should have been his family.

“Think, Robert, think!” he commanded himself, nervously fidgeting with the bat. His eyes caught the trophy that had fallen off the table and now lay on the floor before him. Though spotted with ketchup and some fresh patches of cake icing, it had survived the crash and was still in one piece. He glared at his now-formidable-looking twelve-year-old son.

“Think ya big now, do ya?” he goaded, pointing to the trophy with the bat. “Think you can push your old man around, huh, boy?”

The young man didn’t respond but remained stock still in front of his mom. The silence was deafening.

“Here’s what I think!” his dad yelled, lifting the bat before violently cracking it down hard on the sparkling-though-delicate ornament.

The three stood in shock, watching the metallic little hitter shatter between the barrel of the bat and the floor. The impact instantly transformed the once-praiseworthy symbol into a hundred unidentifiable bits of plastic, now strewn across the linoleum.

The bully didn’t stop there but became more encouraged with each sustaining blow as he feverishly smashed the item again and again, splintering its wooden base and bending the silvery steel seraphim beyond recognition. The boy’s face winced with each painful swing, but he stayed in front of his mother as if to ensure the assault would go no farther than the trophy. After the final wallop, a fatigued Robert Green, bat still in hand, stared back at each of them with a twisted look of satisfaction that he had just crushed their rebellion and restored order over his little fiefdom.

Sensing he should quit while he was ahead, he slammed down the bat and strode out the door of the apartment. As his steps clunked down the tenement stairs, the little girl ran into the awaiting arms of her mother, who collapsed back into the couch, holding her. Her son, however, walked straight to where his bat lay amid the hopeless rubble of his championship trophy. He cautiously lifted it off the floor and slowly rotated the lumber in his hands, inspecting it for damage. He turned to his mother for an answer, though the look in his eyes journeyed far beyond where she was sitting.

“Taylor … Taylor,” his mother beckoned from the couch with the arm that wasn’t holding his sister.

Diamond in the Rough is a captivating story about Taylor Green, an attorney who has worked tirelessly to earn everything he has, including his reputation. Married with four children, Taylor is a partner in a thriving practice, as well as a legendary little league coach in a typically American small town. His talent and love for the game is an inspiration to many, but none more than his twelve year old son Skip. When a drastic turn of events devastates his life, an embittered Taylor recluses into anger and self-pity, abandoning his profession and everything else he’d lived for. As a result the whole family suffers, most notably his wife Paula, who deeply loves him despite their bumpy marital past, and Skip, who takes his fathers withdrawal personally. Though others valiantly attempt to encourage Taylor back into a normal life, it’s his innate love for baseball and a unique relationship that develops from an unlikely source that pulls the sidelined veteran out of his shell to experience what true compassion is all about. In a journey that takes us beyond being spectators and into the very fabric of life, the author portrays the wonderful unfolding of one mans realistic path to salvation that challenges both those who don’t believe in God, and those who do.

W. “Scott” Schneider has been a practicing attorney in Long Island New York for over 30 years, where he lives with his wife Colleen and their daughter Heidi, the youngest of six, now adult children. Though he has published in the legal arena, this is Scott’s first endeavor in fiction. He is an elder at The Harbor LI and enjoys sports, coaching, and time with his family on their rarely dependable forty year old cabin cruiser.