The Battle for the Isle of Ree 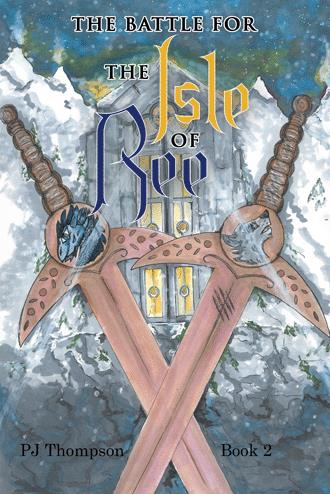 Bar rose to a standing position by bracing his hands against the wall behind him and inching his way up the rough granite. He was careful to put no weight on his left foot. He never took his eyes off the immobile, menacing figure, not for a moment. Bar tried to speak, but his mouth was dry, and a nightmarish numbness was beginning to steal over him.

El! El! He tried to call, but no word came from his lips. He raised his hand as if to ward off a blow, and a small cry came from his throat. Then he made a second sound that was only a moan, but these small sounds were so terror filled that El woke. He looked up at Bar, his eyes sleep dazed.

The frozen horror on Bar’s face caused the youngster to cry softly, “Bar! Bar, what’s wrong?” He rose quickly to go to him and in so doing got between Bar and the strange creature at the entrance to their small shelter. El gently shook Bar by the shoulders, calling his name all the while, and suddenly, with a shudder, Bar glanced down at his new friend.

The numb sensation faded a little, and he desperately fought a compulsion to look up again—up into that awful strength clothed in black. “El, don’t … don’t turn around! Stay close to me, and don’t let me go!” Bar commanded urgently in a shaking whisper. Sick with fear for El and shame at his inability to break the thing’s hold on him, Bar struggled with all his strength to keep the monster out of his mind. How is it doing this! It’s not … not even touching me! El was confused, but he knew Bar’s terror was real. He himself sensed a strong feeling of coldness in their previously warm shelter, yet the fire still burned. He could hear its soft crackling and see its flickering glow on the stone walls.

Though El did not turn around to look, he knew something terrible was behind them, something that was shaking Bar deeply and draining his strength. It took strong effort not to turn and see what it was. Instead, El clung more tightly to Bar and searched his face with fearful inquiry, trying to read there what new trouble had come to them, a new trouble in a growing list.

Bar gripped El’s upper arms convulsively as his ability to resist the thing was exhausted. Aware that he was sinking into a stupor and losing the battle of wills, Bar cried painfully in a voice nothing like his own, “Maker, help us!” At his anguished cry, the sense of cold, sucking emptiness broke, as thin ice broke when struck. His relief turned to terror as the sinister figure rushed at them with murderous intent.

Bar whirled El against the wall at his back with all his remaining strength and covered the lad with his body, his only thought being to protect him. Inadvertently, he put weight on his injured foot, and pain shot through his left ankle and leg. He groaned and crumpled to the ground, taking El down with him.

With hands outstretched to seize them, the hoarsely panting figure plowed through the fire as if the burning flames were nothing to it. Sparks and burning logs sprayed all over their small enclosure. The being’s large hands smashed into the granite wall because its prey was no longer there. Unnoticed for the moment, Bar and El lay huddled at the creature’s feet. Finding its hands empty, the dark apparition screamed in pain and fury, for it had cracked its head as well as bashed its hands. Bar heard the furious howls above him as the thing stumbled backward in agony.

Strong but clumsy and not exactly bright, he thought wryly. Pain and exhaustion blackened the edges of his vision. Now! I must find my Gin’hana now, before I lose consciousness! He turned and frantically searched the ground for his Gin’hana. El was crouched between him and the wall, safe for the moment. His searching fingers finally found the carved handle. He tore the blade free from its scabbard with awkward, trembling hands. Quickly Bar rose on one foot and turned to face his enemy. He held the sword in front of him with shaking hands. Overcoming its pain, the creature charged Bar again. Too late did it see the softly glowing blade the young warrior held before him. The huge being speared itself on the ancient weapon with all the force of its being, doing what Bar did not have the strength to do!

A howl of anguish echoed off the walls and gradually diminished. Bar lay frozen under the huge creature, still tightly gripping his sword. El could not move either, for he was trapped under them both. Bar had no strength to move, to cry out, or even to think. Darkness swallowed him. 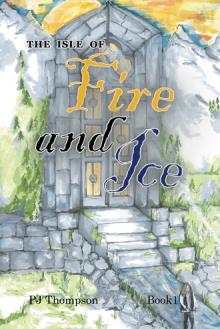 The tale of Bar and Dare’s breathtaking adventures continues in the Battle for the Isle of Ree. The underground and many lost tribes who have rescued the young warriors again and again realize they must take up arms to overthrow King Bardock’s wicked reign. Awful creatures and terrible beings created by an evil sere join the fight. The ruthless king and the brutal sect of Choack have become too powerful and must be stopped. Bar and Dare are joined in the raging conflict by many young warriors who are labeled the Pack. The Pack become famous throughout Ree for their exploits, and the oppressed citizens begin to believe in an ancient prophecy. They have hope that one day they will be free of the king’s corrupt reign.

P J Thompson lives with her husband of 52 years in Denver, CO. They have three married children and eight grandchildren. She and her husband are retired and enjoy traveling to see their children, friends and our wonderful country in their RV. She has BA degree in Sociology, Psychology and Social Work from Oklahoma University.