Serving in the Rain 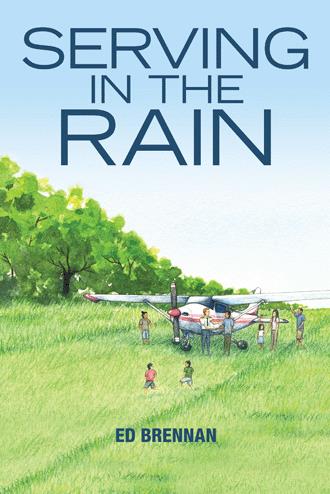 “Puerto Princessa Approach, this is November five eight six three six”, “November five eight six three six this is Puerto Princessa Approach”, “Approach we are three zero miles to your south west, ten thousand five hundred feet, inbound for landing” “November five eight six three six, report one zero miles out”, “report one zero miles out, six three six, and approach, we are expecting an ambulance to be standing by for our arrival”, “six three six, your ambulance is standing by”. Eric was really excited about the turn of events that were finally coming together. Here he was in a very loaded Cessna 182, cruising along over the Sulu Sea in air that was smooth as glass. The big six-cylinder O-470 Continental engine was humming along in a song that Eric was very familiar with. He had grown accustomed to the sound of the motor and was sensitive to any sound that was not normal. He needed to be, he flying at ten thousand feet above open water in a single engine airplane was not exactly safe. On this day, everything was beautiful. The sky was mostly blue with a clear view of the blue sea that was accented with turquoise blobs and a few ships here and there. The air coming in from the vents had the familiar smell of the sea combined with the familiar odor of one hundred octane low lead aviation fuel and motor oil. For a pilot, this was what it was all about and Eric felt like he was in his happy place.
Eric was excited, and with good reason. Amazingly enough, the pieces of the plan were coming together on really short notice. God had obviously decided to make this happen. Through a herculean effort, coordinating the mayor’s office, the Philippine Air Force, the air traffic controllers, and the Puerto Princessa Adventist Hospital, this was finally going to work. Although Eric was sure his injured passenger may not feel as elated as he did, this was a momentous day for the team and their mission project. Riding along with him on this flight was an injured passenger, his watcher, and two missionaries.
Eric had met the two missionaries through other contacts, but, he was not that familiar with them. He was amazed at their ability to work in such remote and primitive environments. That was why he was here, to try and provide some form of support to these missionaries in an effort to ease some of their burdens. He had met these two on previous trips to the island of Mapun, but, this was their first flight with him. This was actually his second trip to the island today, which came as a request through official channels. Fortunately, his contact with the Philippine Air Force on the island had coordinated everything through the mayor’s office and the local hospital. For Eric, he was just happy that things had finally come together.
Eric knew that his team’s work and relationships had made the difference. Because of their history of flying pastors, medical teams, bible workers, and frontier missionaries, the officials recognized that the team was here to help. While this was their first time flying a patient as a request for an emergency medical evacuation, he knew it would not be the last. The months of planning, organizing, and coordinating with the different folks was paying off and the pieces were coming together. Now, finally, this team had made good on their promise, and, hoped to do so many more times in the future.
Eric often thought to himself, things going smoothly in this project was not normal operations, there was always a battle, always someone saying no, and, of course, the enemy was putting hurtles in their path on a regular basis. His wife, along with a few other team members, were always trying desperately to get the pieces in place so that Eric could just focus on the task of flying a 182 over hundreds of miles of open ocean. While this type of flying is considered very dangerous within the pilot community, answering the call for God could sometimes be dangerous. In Eric’s mind, they were not testing God, they were just answering the call, danger or no danger.
On this day, Eric was trying to make sure everything was going as smoothly as possible. The preflight inspection was a long one, the prayers said in earnest, and they had put together a plan to stay in constant communication. He really did not think of himself as the most skillful pilot, or the best missionary, or even a good leader. In fact, Eric was not even sure if he was the best leader for this project. So how did he end up as a project manager, mission pilot, ministry leader, and Christian, who would be trying to save people in this remote area of the Philippines? He was not really sure, but, today was no time to have any of these doubts. Today was the time to complete the mission that was the culmination of a lot of effort, by many people, all with one mission in mind, saving this young man’s life.

This book is a story about a man named Eric. Eric was born and raised on the south side of Little Rock, Arkansas, to an Irish father and an Irish English mother. The story follows Eric on his journey through his chaotic upbringing, his downward spiral into the local drug scene, and his struggles with poverty. He thinks he finds his great solace in the arms of his first love, Erica, only to discover that neither one of them are ready for the never-ending relationship that Eric is seeking.

His only hope to escape the drug life and stagnate poverty of 1970s Little Rock is to join the US Air Force. While the military does help him find opportunity and stability, it cannot help him escape his demons from the past. There is hope. He does find a way through the love of a woman who helps him find God, adventure, and service to the one true King.

Ed Brennan has not only been fortunate to serve in the United States Air Force but also to be a pilot of general aviation aircraft. While serving in the military he was able to have many adventures, meet the love of his life, and finally find redemption in a way that inspired him to write about it.