Joy Came in the Dawn of a New Day

A Memorial of God’s Faithfulness 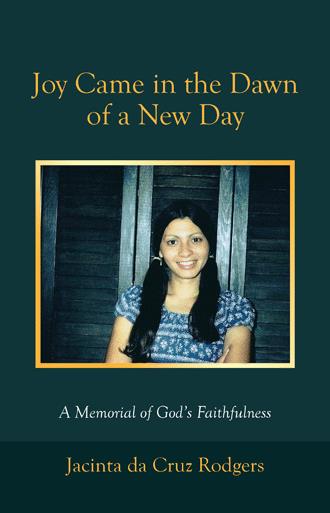 With several invitations available for me to pursue, I chose the place where I felt it to be God’s direction for that time. I decided to give myself sacrificially to the work of starting a new school in a small town in the interior of that state. I always loved teaching. This open door was going to bring me the thrill of my life. This small community was situated in the interior of the state of Rio Grande do Norte, in the Northeast part of Brazil. The people were amiable and courteous. They did not have much, but they had respect for one another.

I stayed with the old missionary couple who had invited me, until the place where I was to live was finished. That was an adventurous experience, to say the least. For my bedroom, they offered their junk room, where it was home for bats and cockroaches. There was little room to move around. For a mattress, they used a bedspread to cover the bedsprings. When the lights went off, there was a battle for space between me and the bats. I tried to cover my face so not to have them on me. The room smelled like them, too. I spent the night tossing from side to side, and enduring numbness on my arms, and legs. Eventually I would fall asleep from exhaustion.

Food was available only at meal time and a small portion. We often left the table hungry, but it did not matter to them. We were not allowed to drink cold water from their fridge. The water available to us was from their dirty well.

Because I could no longer tolerate the well water, I was forced to go to the neighbor for a drink of water. Drinking from the well caused me great discomfort. My stomach was swollen, I had several blood tests done and the doctor informed me that I was a sick person indeed. She did not know how I was still alive after what they found in my blood tests.

Finally, I moved to my new house. It was small, without furniture but it was peaceful. The windows stayed always open to receive the breeze that flew by. I was given an old refrigerator run by kerosene, probably from their junk pile, together with my old bed minus a mattress, an old dining table with two chairs, a few pots and some plates, pieces of silverware and an old gas stove. That was complete and enough for me. Joyce, the Canadian missionary, with whom I stayed when having to go to the doctor earlier in the year, came to see me and brought me a mattress. That was so wonderful to be able to sleep all night! She was the complete opposite of those I was working for.

In spite of the difficulties with the American missionaries, I felt loved and appreciated by the local people. They would have given me anything I needed if they knew my needs. However, often I hid my needs from them, so that the ministry the Lord had called me to accomplish would not suffer embarrassment or shame. One particular Sunday I had nothing in the house to eat. That day a piece of coconut was all I had for food. On Monday morning, before leaving the house to teach, I prayed, “Lord, there is nothing here to eat, but If I had a piece of meat, that would be enough for today.” Not long after this prayer I heard a knock at the door. Who can this be knocking at my door so early in the morning? I thought. It was not yet seven o’clock. When I opened the door, to my surprise, there stood the father of one of my students- one of the poorest families in town, bringing me a piece of meat. My eyes grew big and my mouth opened, I could not believe the answer to my prayer had come so soon! “Thank you Sir, thank you.” I was paralyzed for a while, filled with excitement to know for sure that the Lord was listening to my prayer and witnessing my need. There I thanked Him for answering my prayer. I remember then that this man had just accepted the Lord in a tent revival we had a few weeks ago; now he was carrying a testimony of his faith in God and fulfilling His plan for his life.

The school year was coming to an end; I had only two more months left to teach there, as it was agreed. I directed my focus on seeking the Lord’s direction for my life- what to do and where to go. Should I continue with my studies, or should I go home to help my mother? I asked Him. To know the will of God was very important and priority in my life. As usual, I sought His answer through His Word. That morning, after praying, my Bible reading was Psalm forty-five. The verses ten and eleven called my attention in particular, for they had the answer I was looking for: “Hear, O daughter, consider, submit and consent to my instruction: forget also you own people and your father’s house; so the King desires your beauty, because He is your Lord, be submissive and reverent and honor Him” (Psalm 45:10-11). I received those verses as the answer to my prayer, and decided to wait for the Lord to open the next door to serve Him. He had given me a missionary vision as a child, and I knew that it did not finish in that mission field. That was just the beginning.

Not long after I had prayed and had received an answer from the Lord to wait, exactly two weeks later, a package with my ticket to Bonaire and a letter officially inviting me to be part of the Trans World Radio staff, arrived.

Come with Jacinta to experience the challenges of growing up in an orphanage, where the word “love” was never heard and discipline was the guide and terror of an orphan. Follow her to her first missionary mission in a remote part of Brazil, where dedication grew stronger amidst the challenges. Enjoy the adventure of traveling to Bonaire – the island of the flamingoes. Be ready to take off to a small country, called Swaziland in the dark continent of Africa, where driving is on the left side of the road, where customs sparkle with colors of black and red and the language is SiSwati. Meet the green mamba – the snake always willing to bite you just for being in its territory. Witness one passing by while Jacinta and her husband exchanged their vows at their outside wedding. Travel with her to Israel and feel the vibration of all the religions of the world; where all began and where all will end. Follow her to another call – this time to the regions beyond civilization – the jungles of Brazil, and more by reading Joy Came in the Dawn of a New Day.

Jacinta’s life consisted of serving the Lord from the time she accepted Him as His Lord and Savior. She, together with her husband, lived in five countries where they served in different capacities. In her passion for music, she created over fifty songs of worship and praise to the Lord, mostly based on the Psalms. Creative writing and teaching the Bible are the focus of all she does. Today, she ministers to thousands via their website ministry LightFromTheWord.org, where her teachings, music and poems are available.