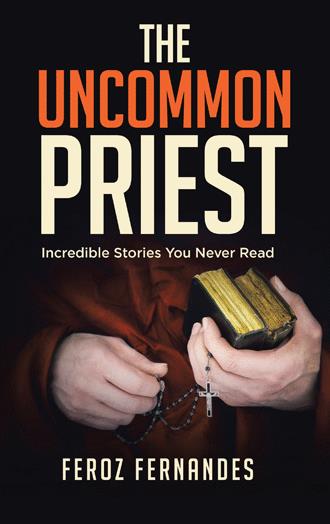 A good friend had always told his parents that he had a priest friend, and visions of old and boring no doubt danced in their heads. One day, the young priest was invited over for tea. So, the priest finally got to meet them.

She wanted a serious answer. The priest could see that from the look in her eyes.

"I trust all my friends," the priest said.

She waited for an answer.

"In matters of trust, either you trust, or you don't trust," the priest said. "I cannot grade trust on a scale."

Later, the priest elaborated for my friend.

"Trusting does not mean accepting all the wrong choices of the other," the priest told him. "It is to provide a space to be oneself irrespective of wired behaviors."

The priest provided an opportunity of hope for the young adult to pursue extraordinary aspirations, without judgment.

A new associate pastor was ready to begin a Sunday service in a U.S. suburban parish. A woman rushed to tell the priest that the appointed reader - the master of ceremony for the service -- was absent.

"My daughter is ready to volunteer," the woman said. "But there is one problem."

"What can be the problem to read the word of God?" the priest asked.

The woman said her daughter was uncomfortable because she had worn blue jeans to church.

The woman pointed to the church's notice board.

Time was running short. The service would begin in two minutes.

"What's wrong with the blue color that the pastor had to bar it from podium appearance?" the priest said to the woman. "What about other colors like green, pink, orange? What about men reading during the Sunday services wearing short pants in summer?"

She pointed at the notice board.

"You priests should change it," she said.

The woman's daughter served as reader. Blue jeans were as happy as ever.

A student-priest joined three classmates in the DePaul University library to complete an assignment for a course called Economic Foundation for Public Policy.

"Do you know he is a Priest?" one classmate said to the others.

"Oh my God -- there is a Catholic priest among us," the other said.

She continued: "Father, you are holy, and we are not."

"We all are holy," the priest said. "If the water is dirty, it does not lose its nature to be water. Our nature is holiness."

Then the three of us got on to the business of math, which to some students never loses its evil nature.

People make a priest, even though he must be ordained by a bishop. His companions also define the priest’s upbringing, filled with fun incidents. In this book, you will discover the lighter side of what happens within the walls of the seminary, where priests are trained. How can these stories avoid organizational politics? The events capture conflict and controversies. Priests do face trials from their own Bishops, Superiors, and people. Courageous priests often defy the mores of the institution while still being faithful to their divine calling. Sheer spontaneity defines these stories. You can call it inspiring or crafty, but each priest found a way around an insurmountable obstacle. Sometimes, people put the priest on the spot. His only response is to admire the opponent. These stories you will read were guarded as a secret, till now.

To be a priest is to be uncommon. But to be uncommon among the priests is a rarity. It can redefine priesthood to stay relevant. I hope these stories, like case scenarios, will enlighten priests to lead their pastoral ministry with creativity and holiness. I look forward that you cherish reading The Uncommon Priest: Incredible Stories You Never Read.

Feroz Fernandes, a Catholic missionary priest from Goa, India, shares dozens of incidents in a church setting. The author shares humorous and thought-provoking interactions among the church hierarchy, between priests and Catholics, and between priests and people of varied faith backgrounds. The author has a master of science degree in public service management from DePaul University, Chicago. Presently, the author is serving as a Fidei donum (Gift of Faith) priest in the Catholic Missions of Canada.