On a Quest to Stop a Bully 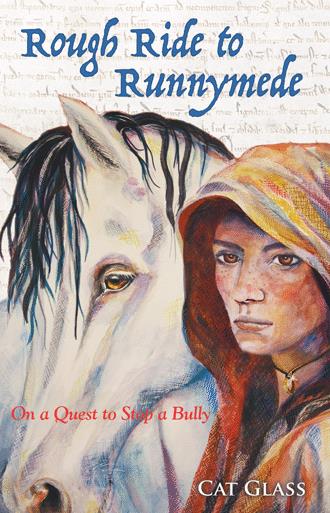 FROM THE FIRST CHAPTER OF ROUGH RIDE TO RUNNYMEDE, KING JOHN PLUNDERS MY HOME

King John placed his boot on my back. He swung his sword. His necklace of bones chattered. Was he going to kill me?

I turned my head to look up. My banner, three stars on a blue field, flew above my castle. Be brave! it seemed to say. I gritted my teeth.

The king shoved his boot into my spine. He pulled his sword across my neck. I shivered, feeling its sharp edge. “What you are going to learn,” snarled King John, “is that I am king, and I can do what I like!” He lifted his sword.

“Today I dub you King’s Jest!” He smashed the flat of his sword down on my neck. I gasped. His sword bashed my head, my back, my elbows. “Brown boy! King’s Jest!” he raged.

His men laughed. I groaned.

“Stop!” screamed a girl. Lifting my head, I met the wide, indignant eyes of Lucy, Simon’s kid sister. Simon clamped his hand across her mouth.

The king pounded me. He was enjoying himself. I clenched my jaw so I wouldn’t groan again.

The blows stopped. “Stand up and take a bow!” shouted King John. “You’re the King’s Jest. Ha, ha, ha! What a delicious joke!” His men clapped.

Dizzy and sick to my stomach, I stumbled to my feet. I looked around for Will.

King John leapt like a wolf toward my castle keep. His pack of men bounded after him.

Someone grabbed the back of my shirt. “King’s Jest! That was amusing!”

I burned with shame. I turned to see my neighbor, Simon, the tall lord of Meonstoke.

“The king put you in your place!” Simon said with a laugh. “You better learn to keep quiet.”

“I’ll never keep quiet if someone treats me unfairly!”

“Never?” Simon lunged at me with his sword. He was dressed in mail. I was wearing breeches and boots and wasn’t carrying my sword. “You maggot!” yelled Simon. He swung his sword at my head. “All your practice with Will won’t help you.”

Jumping sideways, I grasped Simon’s sword arm and dragged it down to his side.

Two men-at-arms with the sheriff’s beast on their surcoats wrenched me away. Gripping me by the arms, they trotted me across the bailey. “The king isn’t finished with you, brown boy!”

They shoved me up the stone steps of my keep. Reaching the top, they spun me round. One of them, taller than I was, with mean eyes, taunted me for being the King’s Jest. His short partner spat in my face.

They pushed me into my hall. It was packed with the king’s men, drinking and carousing and cooking a calf. Spitter and Mean Eyes sent me flying. I came to a stop in front of King John, sitting at my table. He was tearing into his meat with his hands and guzzling a drink. I wiped the spittle off my neck.

I hate being told what to think. I didn’t answer.

King John waved away his servants. He crooked his finger at me. “Step closer, Tay.”

I took a step closer.

He looked me up and down. “How old are you?”

“You’re a bold fourteen,” the king said. “I have decided to give you a task, Wallop. You can go where an armed knight cannot go. You can get close to the Archbishop of Canterbury.”

I was amazed. “Me? Get close to the Archbishop of Canterbury?”

King John slammed down his cup. “My new archbishop is not fit to lead the Church of England! He’s an Englishman. Compared to us Normans, he’s as common as mud. You are going to make him vanish.”

King John’s eyes glittered. “The archbishop read the Charter of Liberties to my earls and told them I should obey the law. Me—the king—obey the common law like every nobody in my kingdom!”

I wanted to say that sounded fair, but I was afraid he’d beat me.

King John rose, circled the table, and snatched my hand. Every hair on my body stood up in alarm. I hated his touch. I wanted him to leave me alone!

He spoke into my ear. “Taymor, I have decided that the archbishop must disappear. You would like to remain lord of Swan Castle.” He twisted my hand. “You see the link?”

The king nodded at a man-at-arms. “Call Sheriff Fulk.” The man rushed to do his bidding. The king crushed my hand in his.

Fulk loped in. Behind him came Spitter and Mean Eyes, dragging Will. He had blood on his face; his left eye had been smashed shut.

I flung off King John’s hand. “Will! Who did this to you?” Will was silent. He looked at me with his good eye.

I turned to face King John. “Will has been attacked. I want justice!”

“The steward of Swan Castle has been arrested for theft,” barked the king.

“Take the thief away,” ordered the king.

Will mouthed three words at me, but I couldn’t make out what he was saying. Sheriff Fulk and his men shoved him out the door.

“How can I do that? I’ve never met the archbishop!”

“If you want Will to live, you will find a way.”

“Do I have to spell it out for you, Wallop? Are you an idiot?”

I stared at him. The king didn’t have to spell out what he wanted me to do. I knew how to spell murder.

"Rough Ride to Runnymede is a very well written and historically detailed book. I much enjoyed it and as chairman of a children's book company I can say I am sure many in the 7-14-year-old age group will learn much from it."

In a 13th century kingdom studded with castles, cloaked with forests, and torn apart by evil, 14-year-old Taymor Wallop must win justice from a cruel king. If he doesn't, he will die and Magna Carta, the great charter of freedom and fairness, will never see the light of day. Bullied for being brown, orphaned and alone, Tay goes on a quest to raise the banner of fair play over England. Twelve-year-old Lucy, a runaway heiress, and Archer, a runaway serf, join him. To overcome lawless King John, the three have to become a team and Tay has to be brave enough to wield the Sword of the Spirit. Tay's adventure is the story of a homeless boy who risks his life to defeat bullying and injustice. Rough Ride joins a family of adventure books that include War Horse and Johnny Tremain. Adding to its interest are a glossary section, history report, and geography notes useful for teachers.

Cat Glass wrote Rough Ride to Runnymede after working with homeless people and writing about men and women willing to die for freedom and justice. The homeless and the brave opened her heart and mind. Her studies in Classical Greek at Columbia University grounded her in literature and philology. Her decade-long career as an arts director showed her what the arts mean to communities. Presentations at primary schools gave her insight into the amazing imagination of young people. Cat is the author of Share the Inheritance, which explores freedom, constitutional democracy, and trust. She lives in a village in Hampshire, England, with her husband. Once lost, now found.