An Exegetical Approach to a Morality of Happiness 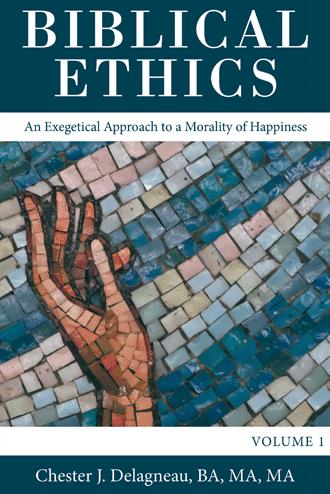 IDEAS HAVE CONSEQUENCES. For example, the invention and devastation of the atomic bomb on Hiroshima and Nagasaki, Japan, during World War II, started with an idea of atomic fission. Likewise, beliefs have consequences. For example, the Columbine school massacre on April 20, 1999—the 110th anniversary of Adolph Hitler’s birthday—was in part the result of one of the shooter’s (Eric Harris) nihilism with its four-fold beliefs: (1) life is meaningless; (2) morality does not exist; (3) reality does not exist; and (4) the belief that nothing can be known. What we believe about life, morality, reality, and how we come to learn about life, morality, and reality affects how we live our lives.

In this book, I focus on a biblical view of morality that best explains people’s persistent pursuit of happiness and the positive consequences involved. “All men seek happiness,” says philosopher, Blaise Pascal (1623-1662). “This is without exception.” Pascal is unequivocally correct. Whether one is religious or non-religious, it makes no difference. The primal reason why we, say, spend time in the yard gardening or break bread with friends and family or even worship God is because we enjoy it. We instinctively care for our own well-being and that is the way God created us to function. Consider Proverb 9:12, “If you are wise, your wisdom will reward you. . . . ” (NIV) We are designed not only with an intrinsic motivation for survival, but also for flourishing. It begs the question, however, as to how we flourish. And it is at this point that the religious and the non-religious differ, generally speaking.

For the majority of church history, most Judeo-Christians have believed that the only way humanity can be truly happy is by living according to God’s objective moral standards found in sacred scripture. Conversely, for most secular humanists, happiness is living according to their own subjective moral beliefs (moral subjectivism) or the subjective moral beliefs of the culture (cultural relativism). But the motivation for why we all do what we do is the same—the pursuit of happiness. Listen to philosophical theologian Jonathan Edwards (1703-1758): “[Jesus] knew that all mankind were in the pursuit of happiness, he has directed them in the true way to it, and he tells them what they must become in order to be blessed and happy.” Protestant apologist Edward John Carnell (1919-1967) speaks boldly about self-interest or self-concern being the motivation for why we do what we do: “The Christian ethic, let us remember, is premised on the self’s love for the self. Nothing motivates us unless it appeals to our interests.” For example, when we love others we are demonstrating that we love ourselves because we are all part of the same spiritual body (of Christ) that is meant to be healthy, beautiful, and to function well. And anyone who is part of something larger than herself wants to see it flourish. But as Carnell rightly warned, “If a system of ethics fails to blend self-love and duty into one vital unity, it is large with the elements of its own destruction.” Joseph Butler (1692-1752), another prominent Protestant apologist, demonstrates convincingly, in his first sermon of fifteen preached at Rolls Chapel, that our motivation to, what he calls, our “private good”—our own preservation and happiness—is far from selfishness; it is self-interest, which is de facto self-love by being true to oneself and acting in submission to God. According to Butler, submitting to one’s conscience for personal fulfillment is not only compatible with promoting one’s “private good,” it works harmoniously with the flourishing of the community or, what he calls, the “public good”: private and public good “mutually promote each other.” To be clear, Edwards, Carnell and Butler are not prescribing that the purpose of life revolves around us always getting what we want or that we should think more highly of ourselves by always putting our needs above the needs of others. Nor are they reducing God to a cosmic vending machine, who exists to serve our every whim. Undoubtedly, they are thinking of the apostle Paul’s command to “not merely look out for your own personal interests, but also for the interests of others” (Phil 2:4, NASB) and Jesus’ response to “love your neighbor as yourself” (Mt 22:39, NIV). Or to put it colloquially, Randy Alcorn states, “If we only think of our interests, we’re wrong. If we think of both others and ourselves, we’re right. Why should a man be a good husband? For his wife’s sake? Yes. For God’s sake? Yes. For his own sake? Yes.” And the opposite is equally true: when a man is not a good husband, and, say, he repeatedly commits adultery, he not only hurts his wife and his God, but also his own well-being. In this sense, sin is a form of self-hatred. Evangelical minister Gary Thomas discusses the consequence of sin vis-à-vis to living the good life: “Name a sin and you identify a serious threat to true, abundant life. Name a spiritual failing and you recognize a vicious attack on a fulfilling life.”

Make no mistake: the starting point and ultimate end of human flourishing is for the glory of God. John M. Frame, Calvinist theologian, says it best: “The highest goal, the summum bonum, is the glory of God (1 Cor. 10:31).”

Christians must reclaim the true definition and thoughtful explanation of biblical happiness in order to live abundant lives. Biblical Ethics restores to the church the way she should live: as morally happy beings created in the image of God to enjoy glorifying him.

The modern church has forgotten the biblical role of happiness according to a Christian worldview. The bride of Christ today faintly reflects the beauty of her Hebraic genesis. She has fallen fast asleep under the spell of deontological (duty-based) ethics that fails to take into account God-given aspects to her humanity, such as personal desires. Three key Hebraic words have the hermeneutical power to transform the church back to her radiant self: esher (i.e., happy, happiness), barak (i.e., bless, blessed), and shalom (i.e., peace, prosperity, health, well-being, favor, friendship, security, and salvation). These terms collectively prescribe a proper morality of happiness to be lived in Christian community.

This book is meant to be used as an academic text and/or supplementary study guide evidenced by end-of-chapter review questions, as well as questions for personal reflection and spiritual growth.

Chester J. Delagneau is a breath of fresh air as a poet of prose in the world of inspirational Christian living. With extensive biblical, philosophical, and ethical training from three prestigious Christian institutions (Azusa Pacific University, Talbot School of Theology, and Fuller Theological Seminary) and with three earned degrees (Bachelor of Arts in human development (psychology-sociology), a Master of Arts in systematic theology with an emphasis on biblical languages, and a Master of Arts in philosophy of religion and ethics), Chester provides exactly what the modern church needs in order to find true (moral) happiness in a broken (immoral) world.