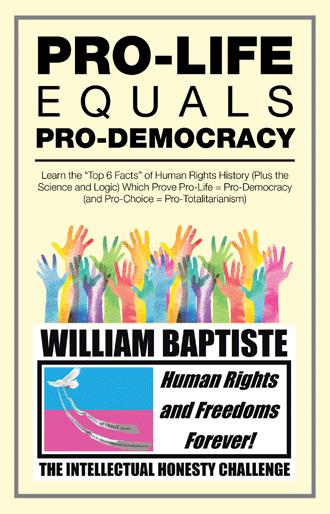 In a kind of “Sequel” to Aleksandr Solzhenitsyn’s The Gulag Archipelago (quoted throughout), with Solzhenitsyn’s intellect, honesty and intense passion for speaking Truth William Baptiste unravels 380 years of bad philosophy that has resulted in Marxism, anti-scientific Postmodernism developed by Marxists to protect Marxism from facts, and current Neo-Marxist Identity Politics which foments racial hatred, which all frequently accompany legal human-killing abortion, which was first legalized 100 Years ago in 1920 Marxist Soviet Russia as a prelude to legalizing the genocide of millions of William’s ethnic heritage. Lincoln said, “A house divided against itself cannot stand . . . it will cease to be divided. It will become all one thing or all the other.” The divisive fundamental incompatibility between democracy built on Equal Human Rights and legal slavery/legal abortion which both deny Equal Human Rights to all humans will incessantly scream for resolution, and in the end we will have to keep democracy and lose legal abortion (as we lost legal slavery), or else keep legal abortion and lose democracy.

Officially Pro-Choice political parties in his country and others keep asininely insisting the Abortion Debate (the Human Rights for All Humans Debate) is “settled” in their favor, all while they pass totalitarian laws making peaceful Pro-Life Human Rights Advocacy a crime in order to silence the Free Speech of Pro-Lifers. All because Pro-Choice politicians simply cannot win a respectful, intellectually honest, intelligent, rational, scientific and rigorously logical debate about abortion. Abortion which was first legalized by the evil Soviets & Nazis specifically because neither believed that killing humans is wrong.
A proper, intelligent and intellectually honest Human-Rights-educated Abortion Debate (Human Rights for All Humans Debate) has never occurred, neither in the author’s country nor anywhere else. Pro-Life Equals Pro-Democracy is William Baptiste’s initial contribution to an honest, intelligent dialogue which actually considers and does not ignore established facts of Human Rights History and Biological Science; a dialogue which is conducted honestly according to sound logic, avoiding the logical fallacies of the intellectually dishonest (which include every single argument typically proposed for legal abortion).

Pro-Life Equals Pro-Democracy with its Intellectual Honesty Challenge intends to both ACTUALLY START and SUCCESSFULLY END the Human Rights for All Humans Debate (the Abortion Debate) Once and For All; and Proclaims THE THINKING REVOLUTION to Protect Free Democracy For Centuries.

When judged according to the objective standards of Science and Logic - and undisputed facts of Human Rights History - the Pro-Choice position for legal abortion is revealed as not even remotely intellectually defensible, and not even remotely acceptable in a LASTING democracy, which can only last on Democracy’s historic Pro-Life foundations. As Solzhenitsyn challenged the genocidal Marxist Soviet Communist Party, William Baptiste challenges every Pro-Choice Political Party which follows their legal human-killing abortion precedent to account for themselves before the public and repent of their totalitarian legal human-killing abortion evil – as intellectual honesty demands.

Before his Ph.D. studies at the Sheptytsky Institute and being a professor at Dominican University College (where he replaced Dr. Andrew Bennett, appointed Canada’s Ambassador of Religious Freedom), William Baptiste got his Master’s Degree with Honors at Franciscan University of Steubenville (FUS), where the Philosophy Chair testified in writing to the University President of “his tremendous academic talent” and “considerable power of mind;” a genius IQ which he has since used to discern and lay out clearly from the tangled webs of historical details the “golden threads” woven throughout history that give us all our Human Rights and democratic freedoms. At FUS, the famous Dr. Scott Hahn wrote William’s work was “outstanding,” “excellent,” “clear, thoughtful and thorough,” and the Theology Chair Dr. Alan Schreck endorsed William’s educational Donum Veritatis - The Gift of Truth Ministries “as an effective and important means to spread the faith and to promote Christian unity… It really is a ‘gift’ to the ‘Internet Generation.’” He was invited three times to the ecumenical Springtime of Faith Rome Summits (Catholic and Evangelical Christian leaders meeting with Vatican Officials) for being considered “one of the dynamic leaders building the New Springtime of Faith.” He recently founded Human Rights and Freedoms Forever! and published DEMOCRACY 101 in response to accelerating attacks on human life and freedom throughout the West since 2015. Having taught a course in Logic, he reminds all those who would read his above Christian qualifications and be tempted to simply dismiss his books merely on that basis (instead of engaging with their powerful facts and logic with intellectual honesty), that to do so is to commit what the Science of Logic calls the “genetic fallacy” combined with circular reasoning, known as “Bulverism.” He says “No intellectually honest person can deny Western Human Rights and freedoms start with The Foundational Principles of Human Rights and Democracy identified herein, which Christianity introduced into the West, and only the intellectually dishonest would dismiss these books lightly and without engaging with their undisputed facts of science and history, and sound logic. But LASTING Democracy, religious freedom, and Human Rights for all require that in response to current ‘Creeping Totalitarianism’ these books start a DIALOGUE in Western nations about just how to ensure these highest of Western values last for the long-term.”<./p>