What to Do with Wishes That Don’t Come True 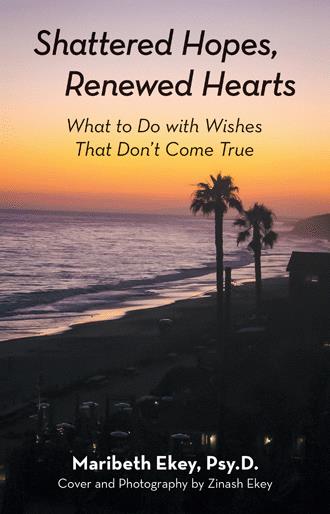 Zach’s Hidden Memories
One man named Zach remembers choosing to split off his feelings. He says that as a little boy, he discovered a black hole in the universe into which he could tuck unpleasant feelings and events. When Zach was very young, his family, which was fleeing persecution, escaped from their native country in a clandestine and highly dangerous operation. Zach’s previously secure childhood then became a nightmare. The escape was followed by a gradual realization that he was a citizen from nowhere and that he could never go home again. Subsequently, he also faced a forced, long-term separation from his parents and spent many years in orphanages.
The discovery of a black hole in the universe was one of the great events of his childhood. He felt heady with relief and power as he tucked away his awful feelings and memories. He stashed away the terrifying events that had happened during the escape. He buried his love and longing for his parents, who could not be with him. He hid his rage at his abusive caretakers with whom he dared not express his anger.
By tucking away the terror of his orphan’s world, Zach could do everything required of him quite stoically. His powers were limitless. He was adaptive to a fault and seemed like the model child. Facing life in a foreign country where he was ridiculed by other kids for speaking such a strange language, he even tucked away his native tongue and resolved never to speak another word of it.
Since this was also the language of the mother and father who had seemed to abandon him, his decision never to speak the language felt like he was saying, “Good riddance.” So thoroughly did he tuck his language away—so real is this phenomenon called splitting—that as an adult, he could not speak one sentence in his native tongue.
Like Zach, many children get caught up in splitting. The choice to split is a protective choice. The child protects his soul from overwhelming feelings that seem as if they could tear him into a million pieces. Backed into a corner, children like Zach make desperate, unconscious choices to protect their terribly small and vulnerable souls from being blotted out by an overwhelming reality.
Children make such unconscious choices when they have no awareness of other options. They react reflexively in the same way one draws a hand back from a flame. These unconscious, reflexive choices may become habitual over time, but the children never know what their options are or even that they are choosing.
These choices are made for the sake of survival. But in the long run, our efforts to create a safer world through splitting cost us in at least two ways. First, splitting takes the energy required to pursue our wishes and live life fully and channels it into keeping our feelings out of our awareness. The result is that we are left with markedly less energy for living life. We are drained and become exhausted easily. Second, when we keep some feelings out of awareness, the unintended result is that we keep all feeling out of awareness. We are built with an all-or-nothing thermostat on our feelings, and the cost of turning down the temperature on certain scary feelings is a numbing of all feelings. This makes for a bland, flat life. We end up numbing our very souls.
The choice to split is not usually remembered as vividly as Zach remembers it. And even he had forgotten about the existence of the black hole in the universe until one night he dreamed about a myriad of black cats pouring out of the black doorway of an attic and threatening to overrun the house. Cats had always been repulsive to him. In therapy, as we considered that the cats might symbolize some repulsive part of himself, he suddenly remembered the black hole in the universe, and the awful memories he had hidden there began to emerge.
In this analysis of his inner world, Zach was letting go of his defensive wish of splitting. As he let go, he found himself mourning. Letting go of defensive wishes always involves mourning because it requires facing sad or painful feelings we have tried to pretend we weren’t really feeling. As we work through the defensive wish, we face and embrace the feelings we once worked so hard to avoid. Eventually, we come to see that the feelings that seemed so overwhelming to us as children cannot really kill us. We see that we do not have to give up our souls in order to ward them off.
Further, as we face and work through the sadness, we come to experience joy. Even though Zach was terribly sad, he was able to celebrate the richness and depth of facing his buried feelings—the glittering, awe-inspiring, multicolored stalactites and stalagmites of the hidden caverns of his soul. Zach’s healing was taking place in the context of therapy, and as he said after a particularly sad and weepy session, “It’s astonishing and kind of exciting the places I go on this couch. I think I experience more of life and adventure here than I could flying around the world three times.” Zach was experiencing the increased wholeness and joy that come as we mourn and let go of our defensive wishes and embrace more of our real selves and our real world.

How do you cope with wishes that don’t come true?

Perhaps death or divorce crumpled your dreams of a bright future. Or maybe you are dealing with the fallout of a career failure or a wounded relationship or with deep longings for a certain kind of love or family that hasn’t materialized.

What do you do with these losses?

Shattered Hopes, Renewed Hearts teaches you how to stop your blind pursuit of unrealistic wishes and instead, listen to the lessons your unfulfilled dreams have to tell you. Courageously mourn and let go of unrealistic wishes. Learn to pursue still deeper soul wishes that can come true. Dr. Ekey invites you to become involved—fully and passionately—in a real world with real people, where wishes really do come true.

Maribeth Ekey, Psy.D., is a licensed clinical psychologist and author. Speaking on her specialty, working through grief and loss to a place of wholeness and well-being, she has spoken on national radio, tv, and at churches, colleges, and community agencies. She has been in private practice for over 30 years, and currently sees clients in Fullerton, CA.