A true story of unconditional Love 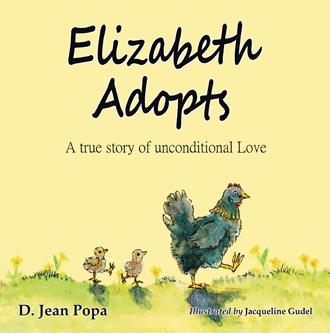 As their van entered the parking lot at the football field, tires screeched, horns beeped, and people jumped out of their cars. Several in the crowd yelled, "Lady! Lady! There's chick...chick..." "I know, I know," said the farmer's wife. "Chickens are on the top of my van." Car lights were reflecting in Elizabeth's, Toby's, and Tilly's eyes, while the entire scene brought delight to the crowd which had erupted in cheers.

That night when the farmer's family arrived home, they could not believe their eyes. There, on top of the van, Toby shivered with cold and fright as his large left wing gathered his mother's small body under his protection, and his right wing kept his sister Tilly close to his side. The farmer's wife was so touched to see such love, she never again tried to shoo Elizabeth and her adopted chicks from their favorite perch.

Elizabeth Adopts is about how a lone bantam hen, unknowingly, taught a farm family the true meaning of adoption. Her determination to become a mother so touched the farmer’s family, that they made Elizabeth’s problem their problem. They helped her by acquiring fertilized eggs in exchange for her unfertilized ones. In return, Elizabeth taught them a lifetime of understanding, knowledge, and wisdom on how God placed inside every creation the know-how to provide, protect and preserve their species. The compassion shown by the farmer’s family toward Elizabeth and her chicks, Toby and Tilly, carried over in how Elizabeth’s family cared for each other.

Jean Popa and her family have enjoyed country life along with their extended family of pets who have taught many life lessons. Now, as the memories linger, Jean has been encouraged by her children to collect and write the down in hopes of enriching the lives of all children.