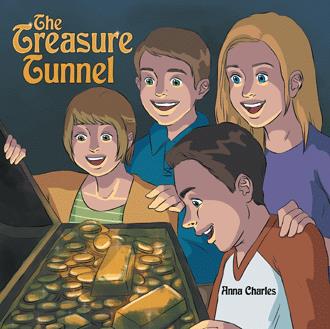 "Okay," said Amanda. "I say we go back to Mr. Rick's house when we're sure no one is at home and see where the tunnel comes out. How's that sound?"

"Like a good idea," agreed Luke. "They sure didn't sound too friendly." He turned to lead again, and stopped to take a stone out of his sneaker. The flashlight, propped on top of a pile of rocks cast a different pattern of shadows on the tunnel wall. "Jess, what's that behind you? It looks like an opening."

Jessie turned and shone the light behind her. In the shadows was an opening where the tunnel headed off in another direction, then abruptly opened up into a cave-like room. "Look guys it's an office for a caveman," Jessie giggled. Directly in front of them was an old wooden desk, a chair and a large black chest. Above the desk was a single bare bulb dangling through an old drainpipe. "What in the world have we found?" asked Amanda. "That electric light sure wasn't part of the Underground Railroad! If your caveman is near his office we could be in big trouble," she said, her voice falling to a whisper.

"You're right, Manda," agreed Luke. "But we can't leave without opening that chest. And I've got to try that light!" He hesitantly reached for the bulb and turned the switch.

Light flooded the room, and the three children instinctively flinched, as though expecting someone to step between them and their only exit. Nothing happened, and Luke's muscles relaxed just a bit.

"Okay, I should be able to open this chest with the pry bar. Let's see what's in it and then decide what to do." He strained at the pry bar again and again, but could not move the lid.

"Let me try, Luke." Jessie reached for the metal bar and was surprised that Luke didn't protest. She, too, worked at it unsuccessfully.

"Here's what we'll do." Amanda took charge, and instead of complaining, Jessie listened. "We can't spend a lot of time here, because we don't know whether someone really uses this place. I say we--". She was abruptly cut off by her brother who had been sitting in the old chair lost in thought.

"Did you notice, Manda--there were cobwebs in the end of the tunnel where we came in, but there weren't any after we passed the spot where this tunnel came off to the side?" Luke was looking up at her.

"So, what does that mean--Oh! No one uses the end we came in from, but the end near the house was used! You're smart, Luke! I wonder if those men who were arguing know about the tunnel and this room? We really DO need to get out of here and then find out how Mr. Rick and his house are tied into this."

Three siblings and their cousin have arrived at their grandparents’ farm to spend their summer vacation. While exploring far into the woods, they find what looks like an old door seemingly built into the side of a large mound of earth. On opening the door, they descend into a mysterious tunnel where they find hidden gold, their friend and neighbor, and his diving partner held captive by two thugs who are determined to find the gold. In the end, the children rescue their friends and are rewarded for their bravery.

As an advocate for early reading, the author has provided material for her children and in turn, their children to whet an appetite for adventure and discovery as well as a zest for life. Each experience, whether in real time or found on the pages of a book add another paving stone on the road to a productive and satisfying life.