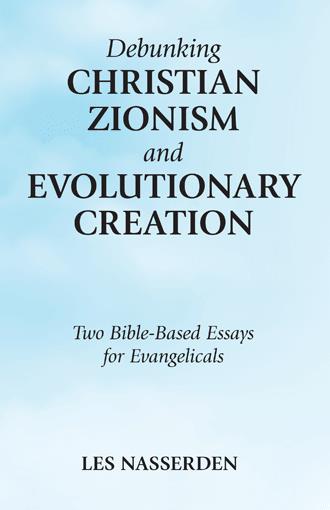 There are four main reasons why I disagree with Christian Zionists. First, Christian Zionists emphasize the Abrahamic covenant and it's land clause, but they fail to tell you how the later Mosaic covenant augments, or sets conditions on, the former covenant and clause. Thus the only people that ever had a God-given right to the ancient land of Israel were covenant-keeping believers. Second, Christian Zionists emphasize the numerous Old Testament prophecies about the restoration of Israel, but they fail to tell you that these prophecies are always associated with an eschatological Messianic kingdom of covenant belief. Since there is not one Old Testament prophecy that explicitly says God will restore Israel to its' homeland in unbelief (as modern Israel has been for seventy years), it is presumptuous to think that the establishment and expansion of Israel in 1948 and 1967 C.E. were direct fulfillments of prophecy. Third, Christian Zionists emphasize that they adhere to basic evangelical Christian doctrine, but they fail to tell you everything the New Testament says about the Messiah - Jesus Christ. More specifically, Christian Zionists fail to tell you that Jesus Christ supremely fulfilled the earlier covenants God made with Abraham, Moses, and David, and that, as the absolute perfect embodiment of Israel's faith, he forever redefined Israel. In other words, you cannot talk about true Israel without talking about Israel's Messiah and eternal King - Jesus Christ. Fourth, Christian Zionists emphasize political and practical aid to modern Israel, oftentimes making such aid a litmus test on one's love and commitment to God, but they fail to tell you what the New Testament says about Jewish nationalism and Christian ministerial priorities. Instead of an agenda of unbiblical racism, politicism, and militarism, the Christian church should be emphasizing love, prayer, evangelism, discipleship, and the ministry of the Holy Spirit, for all people - Jews and Gentiles alike. Now we will look at these four reasons or points in more detail.
Undoubtedly, the current schizophrenic approach to creation is contributing to the anemic state of parts of the evangelical church. Consequently, I do not think we will ever be the dynamic church God wants us to be unless we get our doctrinal house in order. I just think it is deplorable how (evangelical) theistic evolutionists sidestep the five main points of this essay. Once again, these points warrant repeating.
1. The primary means or repository of divine revelation is the inspired, written Word of God (i.e. the Bible), not nature (i.e. creation).
2. A historical-grammatical study of the Old Testament words "yom" (day) and "yamim" (days) supports fiat, special creation, not evolutionary creation in any sense.
3. The book of Genesis depicts historical continuity, not non-historical prose or mythology.
4. The book of Genesis, and the Bible as a whole, describes a finished, stable, and tainted creation, not a continuous, dynamic, and progressive (evolutionary) creation.
5. The Noahic flood was global, not regional (thus the full geological implications of such a massive catastrophic event must be appreciated, not depreciated).
Long after this essay is considered dated, these five points will indelibly remain. Despite the imperfect and limited accompanying commentary, the five points are, nevertheless, irrefutable. Evangelical Christians should be holding their leaders, scholars, and faith communities, more accountable regarding these points. The bottom line of this topic and issue is (a) it was a given postulate to the writers and believing characters of the Old and New Testaments that God created the physical order in six/seven days as depicted in the book of Genesis, and (b) the five points of this essay cannot be erased from the written Word of God, and the consciousness of God's people.

In this modern era, many evangelical Christians have adopted two popular beliefs. First is Christian Zionism—the idea that believers should support modern Israel because it is a fulfillment of biblical prophecy. And second is theistic evolution—the idea that God used extensive evolution in the creation of the universe and living things. While these beliefs are popular, unfortunately they are also dangerous to the faith.

In Debunking Christian Zionism and Evolutionary Creation, author Les Nasserden presents two separate essays where he rigorously challenges the biblical integrity of those evangelical Christians who believe in these false doctrines. In the first essay, Les explains why the Christian Zionist project was one of the biggest mistakes evangelical and Pentecostal Christians made in the twentieth century. In the second essay, he calls theistic evolution a heresy and confronts evangelical Christians with a challenge: Are we going to affirm the Word and power of God? Or are we going to capitulate to both a lingering modernist rationalism that is wedded to naturalism, and a desultory postmodern ethos that denigrates truth, the meaning of texts, rationality, and historical realities?

Even though many evangelical Christians believe in these doctrines, we need to safeguard our minds against false teachings. But by turning to the authoritative Word of God and studying the scriptures, we can discover the truth and strengthen our integrity.

Les Nasserden is a Bible teacher and a landscaper who lives in West Vancouver, Canada. He is not necessarily impressed with credentials and titles per se, but he is committed to biblical integrity, intellectual rigor, and loving God with all his heart, mind, soul, and strength. He has also written a Bible study manual entitled 90 “Radical” Teachings of Jesus Christ: A Survey Study & Forum Based on the New Testament Gospels.