The Plowshare and the Sword 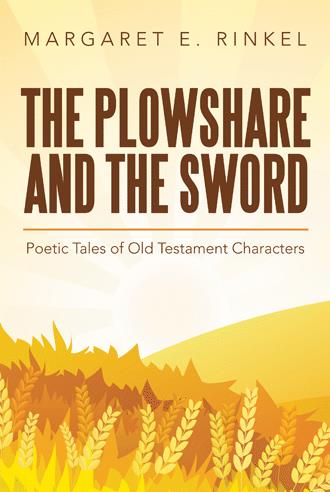 Storyteller: “Thus saith the Lord” was the prophet Jeremiah’s frequent opening statement when he delivered his message to king or people. As a prophet he played an important role in the religious and political climate of Judah. Often the king sought his help, acting on or rejecting his words. Stern words they were in recounting the sins of the people or pronouncing judgment. And the judgment was harsh against Jerusalem, Jeremiah’s beloved city. For his unwelcome pronouncements he suffered rejection, prison, deprivation and attempts on his life. Often, he was ignored. Who wanted to hear Jeremiah’s oft repeated political and religious notions of the destruction of Jerusalem, a thriving city? Who wanted to know of the deaths and coming exile of many of its citizens, prominent and lowly?
Now that Jerusalem has fallen to the Babylonians in 586 B.C., Jeremiah sorrowfully recalls events and the turmoil leading to this visitation of the Lord God’s wrath.
Jeremiah: How shall I tell it,
The desolation of Jerusalem,
the slaughter of my people, my beloved city?
How can I bear to tell of those who fled
headlong into the marksman’s arrow,
or those led forth in chains to foreign soil?
How to tell of Nebuchadnezzar and his legions
who deride Judah’s weakness,
who snatch up Judah’s treasures
and gloat over Judah’s downfall?

These years I have delivered the Lord God’s words,
stern and unwelcome. I was undeserving
of the taunts, the floggings, imprisonment.
Once I was dragged to Benjamin’s gate
and shackled in the stocks, once mired
in the depths of a cistern in swamp-like mud.
Yet the words of the Lord cannot be silenced.
Every word I spoke with a heavy heart,
each utterance with a sigh,
the Lord’s words dipping and soaring,
words dark with the Lord’s wrath,
terrible with destruction should Judah
not repent and return to the faith
of our fathers Abraham and Moses.

Often, I have worn this wooden yoke
strapped to my shoulders
and faltered under its weight.
Still a reminder that all of Judah
must for a time wear Babylon’s yoke
as harsh punishment for heinous sins,
as the way to survive the present crisis.
“Treason” hiss my critics.
“To submit to Babylon is treason!
Jeremiah badgers us with words of treason!”
And the glib-tongued rebels advise King Jedekiah
that Jerusalem and the Temple are inviolate,
Judah’s legions strong
and the support of Egypt certain.
Nor would the Lord fail His chosen people.

The Lord God’s glance takes in the ways of men
who offer ritual words, then satisfied,
turn again to unjust ways.
Judah’s priests, fettered to their idols,
prattle of salvation and offer expiation
for Judah’s lechery, greed and oppression.
Judah’s priests immerse their hand-carved idols
in stinking odors of burning flesh,
offering the sacrificial ram,
and most despicable, newborn infants.

On that night when battering rams
thumped against foundation walls,
sleepers started from their rest
and double-barred their doors.
Sandals scrunched across the hard-packed earth.
Reinforcements sprang to city gates and walls.
The fetid air was all about us.
The walls were breached. Fighting men were
swept from their posts amidst a tangle of shouts
and clashing swords. Silence would quickly erupt,
then wave after wave of attack and slaughter.

When the sun died in the sky, it was over,
the gates battered down,
the last defiant swordsman sought
and run through with the blade.

Palace and temple were stripped of their gold,
then fired. Night winds fanned the flames
and layered gray ash over the rubble
that was Jerusalem, that one day should be
Jerusalem restored according to the Lord God’s words.

How shall I tell it?
Jerusalem is a dung heap
of broken faith, broken bodies, broken hopes,
steeped in waste, in desolation.
Mine is the agony, mine the despair
that bids my tears, unchecked, flow down my beard.
I stand, my arms outstretched toward God,
beside the burning altar of Jerusalem
and pour my grief above this grisly offering,
and shroud this needless sacrifice with tears.

Storyteller: Jeremiah’s troubles followed him because he constantly predicted disaster instead of comfort and hope for a people that had known wars through much of their history. He predicted the Babylonian takeover and dramatized the bondage Judah faced by wearing the wooden yoke around his neck. His intense message was ill received even to the point of some citizens calling for his execution. After Judah’s fall he traveled to Egypt with his secretary Baruch who would write Jeremiah’s utterances as God had commanded. Jeremiah had served five kings in Judah and warned his people of their sins and need for repentance. He had done what he could. Though there is no biblical account of his death, it was said that he died in Egypt.

Reflection and Application:
1. What images in Jeremiah’s story do you find powerful or moving? Under what conditions did Jeremiah deliver his unwelcome predictions?
2. With all the obstacles Jeremiah faced under the reigns of Judean kings, why did he not give up his thankless task, succumb to the forces against him and escape before the destruction of
Jerusalem?
3. Jeremiah was scorned by his people for his predictions. But the Lord God insisted that Jeremiah follow His direction to go and speak in His name (see Jeremiah 1:6-8). What if he had failed in his obedience to God?
God. What lesson for today do we find in Jeremiah’s approach?
4. In his final speech, Jeremiah weeps over his fallen city. What does this say of Jeremiah’s devotion to Jerusalem and its inhabitants?
5. Jeremiah’s message to king, people, and his difficult life of ups and downs in Jerusalem covers a major section of his book. Yet he never backed away from the Lord’s message to his beloved city. What can we learn from his experiences to help cope with trials and changes in modern life?

Discover drama in the lives of more than forty Old Testament figures between 4,000 B.C. and 445 B.C. Introduced by the itinerant storyteller, dramatic monologues and dialogues show the Hebrew people caught up in the religious and political turmoil of the times. Patriarchs, prophets, and ordinary folk speak of injustice, inequality, and oppression. Through adversity, the Hebrews define their relationships with their God Yahweh. Old Testament figures, earthy and exemplary, emerge in moments that connect all humans to one family.

For church program resources, these story poems lend themselves to devotional reading, table drama, group study, and performance with simple costumes and props. For groups, the vignettes offer questions for discussion with questions for reflection and discussion.

The storyteller projects hope for a world in which “justice shatters the blood-edged sword, and mercy proclaims the life-giving plowshare.”

Margaret E. Rinkel is a former high school English teacher with a lifelong interest in biblical study, storytelling and poetry. Her creative approach to classroom instruction earned an Illinois Governor’s Master Teaching Award. In addition to her poetry contributions she co-authored The Picshuas of H. G. Wells: A Burlesque Diary.