How Santa and His Reindeer Came to Fly

A Touch from Christ Made Santa’s Reindeer Fly 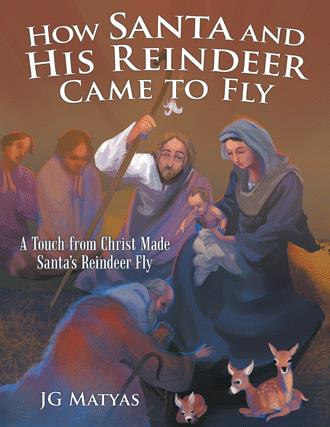 There is traditional historical evidence for both the birth of Christ and for the existence of the Bishop of Myra (commonly referred to as the first example of Saint Nicholas or also known as Santa). This story joins the two at the scene of the Nativity where the mystical fantasy begins. Where a simple touch from the finger of the Christ child transfers the powers of flight and bilocation to Santa and his reindeer. The author suggests that the traditional image of Santa was allowed by God to be a constant annual reminder and a reflection of the Gift of His Son to the world.

Christmas as a contemporary holiday is centered much on the whimsical activity of jolly bearded magical elf in a red suit who answers wishes and brings presents. When in reality, the reason for the season is Christ’s birth, the beginning of God’s love for man through redemption. This small story is an attempt to join fantasy with a historical perspective.

A husband to Kathleen and a father of four daughters and a grandfather of eight. The author by training is a clinical pharmacist. The author was raised by first generation Byzantine Catholics, educated in elementary schools by Franciscans and high school by Marist Brothers and Benedictines through his first college degree. Catholicism has been the basis of his religious education.