The Psalms from a Christian Perspective 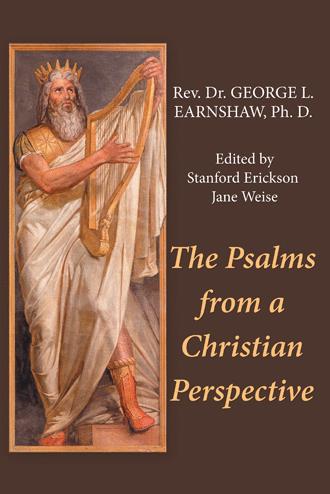 God has given us Christians these Psalms to read and ponder. They run the gamut of various emotions and cover many diverse subject matters. It is surprising how many of the same problems the Psalmists deal with that we also face today. As we read them, we must always bring our Christian faith to bear. We need always to read and interpret them through the eyes of the Lord Jesus Christ. Many of the Psalmists’ words are quoted in the New Testament. They constitute a worthy foundation upon which New Testament writers built. I assume the Apostle Paul had memorized many Psalms. They came readily to mind as he wrote his epistles to the converts of Christianity.

For the neophyte Christian, with little or no background of the Psalms, I offer the following as a brief overview.

The Psalms were considered the “song book” of the Jewish people. They are poems written by talented authors, telling about the work of God in creation, and His loving purpose for His chosen people. Many were written to be sung or recited as part of the liturgy of the annual Festivals held in the Temple. All of Israel’s history is contained in the Psalms. Psalms 1-72 seem to deal with the earliest time of the Nation’s beginning, specifically the great days of David and Solomon. Psalms 73-150 reflect the later time, when the mighty prophets of the 8th, 7th and 6th century B.C. were active. During this time: the ten Hebrew tribes of the Northern Kingdom were demolished in 722 B. C.; there was a revival of faith in Judah in the days of King Josiah; the fateful destruction of Jerusalem in 587 B.C.; and, the exile of the Jews to Babylon. Later Psalms include the exile’s return to Judah and the rebuilding of Jerusalem and the Temple. Also, certain Psalms are considered “Messianic,” anticipating and describing the redeeming Savior not only of the Hebrews but of all people. In the New Testament, Jesus actually refers to and quotes the Psalms more than any other book in the Old Testament.

Every writer of the Psalms was conscious of the fact that God had revealed Himself to Israel by what He did and how He acted. In the early days, God revealed Himself to Abraham. Later, He sent Moses to Egypt to expedite the freeing of the Hebrew people from slavery, with His miraculous help. Then, camping around Mount Sinai, God gave his people the law (the Torah), the first five books of the Old Testament. He also made a covenant (an agreement) with His chosen people (Exodus 19:3-6). He promised He would be their God if they would “obey me and keep my covenant.” If they would agree, then they would be “my special treasure from among all the nations of the earth; for all the earth belongs to me.”

The Psalms cover a multitude of subjects. Many of them tell the reader to remember the “mighty acts” of the Lord. All of the poems either address God directly, or speak about His miracles indirectly. The Psalmists call upon the Lord to bless or heal them, or ask God to go with them with His “strong right hand” to support them in battle. Many Psalms are complaints (laments). Some are confessions of sin. There are Psalms composed on sick beds in anticipation of death. Many focus around the king, and there are Psalms that admire the beauty and significance of the Holy City of Jerusalem. A number of them deal with God’s concern for righteousness and His negativity toward wickedness. Several joyously declare the reign of God.

There is a belief among many Christian circles today that only spontaneous, unlearned prayers are authentic. God has placed a prayer book—the Psalms—in our hands. The Psalms are at the heart of the Bible and they are not to just inform us how the people of ancient times prayed, but they are put in our hands by God to teach us how to pray today! Praying a lament psalm can be beneficial, even if we are not in distress. Why? Because it prepares us for a time of trouble that will surely come to us all. It makes us aware that suffering is a part of our human experience—it happens to the righteous as well as the wicked. These Psalms give us the assurance that God is in control and they provide us with strength and confidence in times of trouble. Secondly, praying the lament Psalms sensitizes us to have compassion toward other sufferers.

One final thought:God’s purpose with all people, and that includes why He inspired the writers of the Psalms and preserved them for all of us today, is that God wants to bring all of us into His fold. He saves us out of His sheer grace (“Yesha”). When He touches us with his “Yesha,” (His salvation), we automatically become God’s “junior partners.” We are, thereby, called to bear this fruit of God’s saving love. Since He created all us human beings in His image (see Genesis 1:26), we are given the potential of doing what God does. We are empowered to share God’s “saving love” with others. When we approach another, our (Yesha”) becomes (“Yeshu ah”) (a feminine rather than the male use of (Yesha”). This divine “saving love” puts the other person in a spiritual condition where they are ”open” to be receptive to “being right” with God.

The Psalms are a mirror of self and a window to God.

Is the God of the Old Testament the same God of the New Testament? The Psalms from a Christian Perspective scrutinizes each of the 150 psalms in terms of setting and what the writer is trying to say, underscoring that the writers—nearly half of the psalms are attributed to King David—struggled with the same human condition we suffer with today. This commentary on the book of Psalms also points out how each of the 150 psalms reflects or does not reflect the Christian faith. The book of Psalms is a mirror of self and a window into God. It also explains why we need a redemptive divine savior and predicts the suffering to be endured by our savior.