Warriors of the King 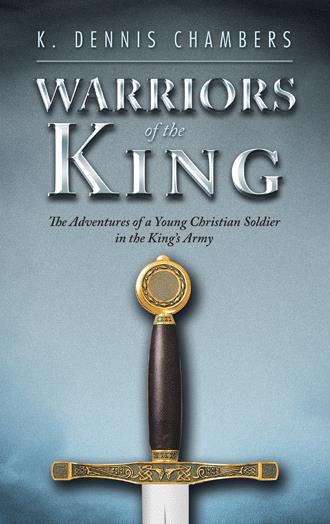 In the back of the room the door burst open, kicked hard by a young man whose hands seemed to be tied in front of him. Everyone turned toward the noise.

“Armory museum!” the youth shouted, “Where?”

The crowd stared at him, too shocked to respond, so he turned to the left and kicked open another door. The library! He plunged out of there and ran down the same corridor, forcing open the next door. The armory!

Alaric scanned the shadowed room. Light emanated from a closet-sized space against one wall and he ran to it. Inside were three swords hanging from the ceiling and gleaming gently against the gloom – swords just like the ones back in the castle. He pulled one out of its scabbard and plunged the point into a wooden shelf so it stood fast vertically, then rubbed the ropes binding his hands against an edge. The bonds fell aside immediately. He pulled the weapon back out of the plank and used the swordlight to find the shelf of helmets, all labeled SALVATION on the front. He picked one up with one hand and pushed it onto his head. It fit perfectly, and weighed nothing at all. He was a soldier! But he would think about that later. Now he heard loud murmurs of confusion and ran to the sound, sword high and flashing, shouldering a dusty shield on the way out of the armory.

It was not Alaric’s first time with a sword, of course, but it was his first time with this kind of sword. Feather-light, it seemed to hold itself up and pull him in the direction he should go. When he dashed into the big room he could see the people were starting to panic because the door had burst open again, seemingly on its own.

But then events changed again. Alaric’s swordlight showed that two gigantic forms in black armor were plunging through the doorway and casually tossing people aside while looking around for him. Now the congregation started screaming in earnest.

Alaric doesn’t let anyone tell him how to live his dangerous life spent robbing the rich barons and wicked squires who inhabit his medieval world. One day, deep in the forest trails, he encounters a soldier of the King. Far from robbing this formidable knight, Alaric is persuaded to visit the King’s castle and discover for himself what a meaningful life looks like.

This new life that unfolds in front of him is filled with adventures, sword fights on flat prairies and steep mountains against powerful enemies, new friends, and even a girl whose smile lingers in his mind.

A former Navy officer in the Pacific Fleet, Dennis Chambers has worked in the creative departments of major advertising agencies, taught English at several colleges, and enjoys exploring the coulees and mountains of Montana. He holds a Master’s Degree in 18th Century English Literature from Boston University and has studied advanced grammar teaching in Ireland. He once, to his surprise, placed third in a state epee sword fighting contest. He lectures frequently on the Tabernacle in Exodus. A father and grandfather, he lives with his wife and Boston Terrier on the seacoast of Massachusetts.