Walking in the Power of the Almighty Creator

by Luis A. Gonzalez 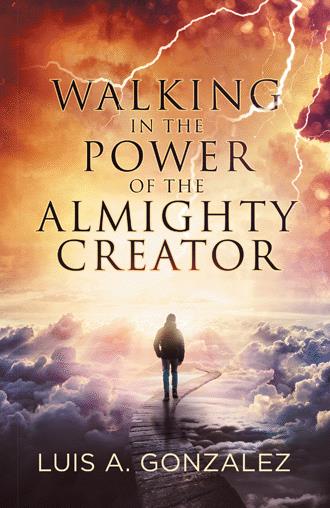 Introduction
(My Encounter with The Creator)

Hebrews 4:16 (NKJV)
Let us therefore come boldly to the throne of grace, that we may obtain mercy and find grace to help in time of need.

I said to the Creator, “If You are who You say, then prove Yourself to me, show me that You are real, and speak to me in an audible voice.”

Suddenly, as I was about to take my next breath, the most peculiar thing happened. A strong gust of wind, or what I like to call a summer breeze, swept right through my apartment with great force. This surprised me because I did not have a fan or air-conditioner, and the door and all the windows were closed. As I turned around to see where this wind came from, I felt another wind. This first one was transparent in nature, but I could actually see it this time. It was like a large wave of water coming toward me, which rushed right past me.

As I was pondering and thinking about this mysterious and unusual wind that just swept over me, I then experienced someone opening a door in the back of my head; this force was attempting to get access to my mind. I thought to myself, That’s very odd and strange, and I knew instinctively that something profound was about to take place.

Honestly, I became a little anxious and frightened, anticipating the unexpected, thinking perhaps I had crossed some kind of line with my complaining, and I felt I was no longer in control. I was not sure what would happen next. That’s when an audible voice began to speak to me from three different directions. He then revealed to me and said, “I am your Father, your heavenly Father, the Creator.”

As He spoke to me, I felt the nature of His masculinity and awesome power; I discerned His incredible love for us and His vast understanding, which appeared to reach into infinity. I was astonished. I could not believe this was really happening and said to myself, My goodness. He is really real.

I had an experience with Him as a child, when He first spoke to me as I was growing up; however, that was many years ago, and although I heard His voice, I never really saw Him. Up to this point, I was not really sure if He actually existed, because as a college student, I had learned to trust the opinions of PhDs, college professors, and the scientific community for answers, but now that had all changed in a dramatic moment.

This meant I would now need to reevaluate my beliefs and factor into the equation the existence of this immortal and divine being and take Him into careful consideration as I moved forward in life. I was also able to see the Creator as He spoke to me; He had the appearance and persona of a commander and an ancient king.

He said only three things to me, which I will never forget: “I am sorry for the way you feel. I understand, but if I had given you everything, it would not have been fair to the others.”

He then immediately showed me a vision. That is all the Creator said, but while He was speaking, I perceived a real and undeniable sense of His divine nature, His immense and unlimited power, and His great love for us, which appeared to go on for miles and miles without end. He also showed me His love and passion for justice, which startled me and got my attention and revealed to me His vast understanding of everything in the universe.

As I marveled at the Creator speaking to me, I was able to see Him clearly and determined that we were made in His image and likeness. He then showed me in this same vision other people around the world on different continents, including Europe, Asia, and the entire Western Hemisphere. These were people I didn’t even know, people who were struggling with their own problems and issues. He made me understand that I was not alone and that everyone at some point in their life struggled and faced trials of some sort, but He was there to help if you were willing to call upon His name.

In the vision, I was also shown outer space and saw other planets in the distance, and then I was shown what looked like some kind of gigantic blue caterpillar or wormlike structure in outer space. This structure appeared to house some sort of advanced intelligence; I’m still not sure why I was shown this or what it means, even to this day, but I felt and understood that it was some kind of command center where decisions are made. The Creator showed me that we are not alone on planet Earth and that there is other intelligent life out there in the universe. I got the sense that He frequents that area in space, and I also understood that a part of Him dwells in us here on earth.

When this experience of the vision and the words He spoke were over, I was physically touched by His divine power and experienced a peaceful and warm feeling all over. I had this sensation that everything was going to be all right and that my prayer had been heard and would be answered. I then became peaceful and calm. After He touched me with His power, He never left me. He has been with me ever since. I truly believe the Creator, who is the God mentioned in the Bible, would want me to share this story about the truth of His existence so people don’t lose hope when times get tough and difficulties mount. His desire is that you will put your trust in Him and call upon Him when all else fails and when you are feeling hopeless.

Simply put, He is a Father. He has a sense of fairness and desires to hold the hands of His children as they walk through their journey of life. He is there to help you make the best choices during critical times, so you get the most out of life, while keeping you safe and drawing you closer to Him. I have come to realize over the years that you don’t need to have all the answers right away as you travel through life, but you do need to know the one who holds the answers, and in His perfect time, He will reveal to you what to do in each situation and every circumstance so that your life will be more fulfilling and will unfold in accordance with His will and divine plan.


Proverbs 3:5 (NKJV) Trust in the Lord with all your heart, and lean not on your own understanding; in all your ways acknowledge Him, and He shall direct your paths.

The author personally met the Creator, the God of the Bible, in the spring of 1994. The Lord of all the earth, as He is also known, manifested Himself to him and gave him a vision, which would, in turn, be a life-changing moment. As a result, his life and beliefs were fundamentally transformed, and he was given a new perspective on life. The author will show you how to communicate with the Lord God Almighty so you too can hear His voice and walk in His power by developing a close relationship with Him. This will enable you to overcome any challenge or obstacle and enjoy and experience His presence and success each day in every area of your life.

Luis A. Gonzalez has been active in various Christian ministries over the past twenty-five years, which include outreach to the homeless community, ushering ministry, church council, Thanksgiving and holiday relief efforts, back-to-school programs for kids, and Bible studies. He has a bachelor’s degree in management and an MBA from Golden Gate University and is also a licensed airplane mechanic/technician. He was a corporate securities paralegal and worked closely with numerous attorneys forming corporations and preparing IPOs, mergers, and acquisitions. He also worked in banking, selling financial services and products. He is an entrepreneur and currently the president and CEO of Rose’s Cleaning Corporation, based in Silicon Valley.