Jesus Son of God—Son of Man Jesus Is Our Pattern

A Commentary on the Book of John 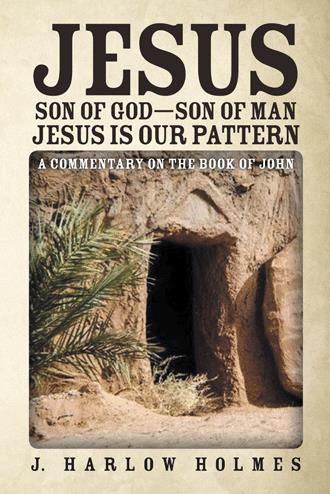 This is a Commentary like no other today. It reveals the true nature of Jesus as He walked on the earth and fulfilled the very necessary role that was required because of Adam’s fall. It fulfills the passage of I Corinthians 15:45—the last Adam. Jesus had to be like us in order to take our place. He was not God in flesh as preached today from most pulpits. He was the manifestation of God, His Father. Manifestation is the KEY word. He was God manifested in the flesh. When the Apostles saw Jesus in action they saw God the Father, John 14:9-11. We can see God in Jesus. He was our pattern.

This is a Commentary like no other today. It reveals the true nature of Jesus as He walked on the earth and fulfilled the very necessary role that was required because of Adam’s fall. It fulfills the passage of I Corinthians 15:45—the last Adam. Jesus had to be like us in order to take our place. He was not God in flesh as preached today from most pulpits. He was the manifestation of God, His Father. Manifestation is the KEY word. He was God manifested in the flesh. When the Apostles saw Jesus in action they saw God the Father, John 14:9-11. We can see God in Jesus.

Another important message is that Jesus was our pattern. We, the Church, should be doing the things that He did today. He Said to the disciples:“As the Father sent Me, so send I you.”John 20:21. Then He included us in His prayer in John 17:20-21.

The Bible has been translated by those who believe in the doctrine of the Trinity. This came from Constantine and the first Nicene Creed in the 300s AD with the penalty of death involving over 200 Bishops if rhey did not sign it as he commanded. It seems that two were willing to die for the truth. All that was required to emphasize that Jesus was God just involved some prepositions and pronouns. However, the bulk of Jesus’ confession indicates otherwise.

The Prologue is the foundation of proof that Jesus was a human being just like you and me. The Lord told me that most everyone is a product of someone else’s teaching today. However, when I was first filled with the Holy Spirit in my mid-twenties Jesus told me to let Him teach me. I have been faithful to that command for nearly 65 years. This commentary is the result of that command.

Jack H. Holmes was born in Palermo, California, the year before the crash of 1929, and grew up during the great depression with poor, but hard working parents.

He completed his high school education at Oroville, California, and received his mechanical engineering education at the University of Santa Clara on a basketball scholarship. He worked for 44 years in the mechanical engineering field; 13 years for Food Machinery and Chemical Corporation (FMC), in San Jose, California, and Yakima, ashington; and from 1964, 31 years for Kwik Lok Corporation in Yakima, where he was Chief Engineer for 26 years. He received a number of design patents from both companies.

In 1949, while in college, he married Merriam Emmons and they continued to live in Santa Clara for eight years. Still in his midtwenties, he became very involved with youth ministry in the Advent Christian Denomination, both in the local church, and the Northern California Conference. He was also on the San Jose Youth for Christ board for several years. During his time of teaching Sunday School and directing youth work, his Bible studies led him to receive the Holy Spirit in bed one night. His life immediately changed, and he became entrenched in the Scriptures, praying and
studying every morning before work, noon hours, and whenever he could find time.

This went on for more than sixty four years, doing in-depth individual word studies and transliterations which became the avenue for the Holy Spirit to give many enlightenments. These new truths became foundational for his spiritual growth and relationship with the Lord. Right after his initial experience by the Holy Spirit the Lord clearly said: “Do NOT read other books or commentaries. Let in his life over the years who have provided spiritual insight which has contributed to his growth in his relationship with Jesus.

In 1958 Jack and Merriam moved to Yakima, Washington. While in Yakima, he and his wife continued to be very active in youth work and church leadership while attending Bethel Church of the Nazarene. He was president of the Yakima Chapter Full Gospel Business Men’s Fellowship International, on the Yakima Youth for Christ Board, and also on the board of KBBO Christian radio station. Upon moving to Cowiche they opted to go to the nearby Naches Heights Community Church. In 1997 he and his wife decided to sell their home and go full time in an RV doing construction work for churches and youth camps with MAPPS, an Assembly of God volunteer organization.

In 2004 he and his wife settled back in Yakima due to his wife’s illness, and attended West Valley Church of the Nazarene.

In 2011 Merriam passed away and Jack was remarried to Darleen Norton. Darleen proved to be another blessing of the Lord, who also helped in his writing and editing.

Through the later years he has been motivated by the Lord to put down some of his thoughts, both old and new, in book form to share with anyone interested in searching for truth. REAL CHRISTIANITY - The New Covenant-Life, Living, and Rest Now is his first book published 2001—a Text-Book on basic Christianity.

He has a second book published now, a follow-up to the first book, which is REAL CHRISTIANITY II, The New-Covenant Life-Style. He has numerous essays on subjects that help to improve interpretation of the Scriptures, offering correction on Christian doctrine. He has one essay, Defining Love, published in the book LOVE AMONG
US, edited by Darrin L. Grinder and Thomas Jay Oord, published by Outskirts Press Inc. 2009.

The Gospel of John is his first full commentary on a book of the Bible. It is an effort to maximize the humanness of Jesus, and identify Him as our pattern for living and doing His ministry. The commentary is also an effort for bringing more correction to basic Christian Theology. The purpose of the commentary is to discover who Jesus is, what we have through Him, and endeavoring to understand more of the spiritual. Finally, it is for perfecting our walk with, and relationship to God, our Father, and His Son Jesus, the Anointed One.

He readily acknowledges that he is not infallible, and welcomes any discussion that will bring correction for producing a more truthful representation and understanding of these, and all Scripture. We should be like the Bereans, who thought it was important to verify the Apostles’ teachings. He welcomes any and all willing truth seekers to dialog about the book, or whatever is on their heart concerning the Word.

It is his deep conviction that the enemy of our life is making great headway in discrediting and diluting some basic tenets of the New Covenant, and the Gospel of the kingdom of God through inherited misconceptions and numerous modern language translations today. Granted, these translations are, for the most part, an honest effort to make the Scriptures more user friendly. However, they have a tendency to continue erroneous concepts and biases from the past, which are embraced by today’s teachers and theologians, and even getting further from the truth.

His heart and motivation is to somehow stir up the Church to be the powerful organism that is displayed in the book of Acts, which he believes is still the intention of the Head, the Lord Jesus, the anointed one. The book of John gives us the most powerful insight into the heart of Jesus, and His Father. It is his prayer that this commentary will bring correction and clarity to the Scriptures.