It’s a Crazy World Out There!

by Joe T. A. Nwokoye 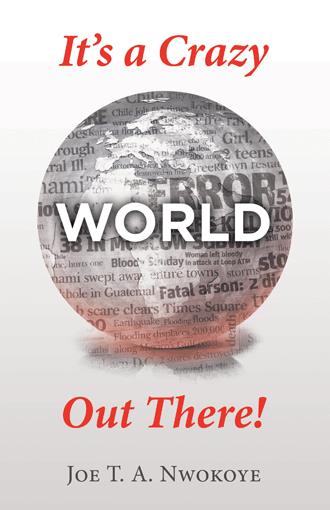 When President Trump was campaigning for election, I was one of those who thought he had no chance of winning, so let him enjoy the ride. Why was I of that opinion? One, he is not a politician. Two, he is a rich businessman who just wants to spend his money. Three, his campaign looked so childish to me: the way he talked, gestured his hands and the only slogan you would hear was, “America First”. But months in serious campaigning, I began to notice something different in the momentum of the campaign and the debates. The way he was addressing his republican opponents was exactly how he addressed Senator Hilary Clinton. He called all his opponents the same names in different ways and along way he eliminated all the popular republican candidates. Even at that I praised him but I didn’t give him a chance against a well-known politician whose husband was a charismatic former two term president of the United States. When the election was over and he was declared the winner and quickly I prayed for him and have been doing it ever since.

However in President Obama’s case I did not feel the same way I felt during President Trump’s campaign. On both terms I predicted before the election on Christian television channel TV20 in Salt Lake City, Utah that President Obama would win and so it happened. I still have the recorded videos of the TV interviews. But this man, President Trump was put in office by the hand of God. We may not like the way he talks, treats, jokes, etc. But many prophets in the Bible who were appointed by God might not be the choices of the church today.

I am a citizen of the free world who travels and have been around some politicians who cannot be trusted at all. I must say that some choices of words he uses would not be my preference but that’s why he is who he is. I live in Scotland, the country where his mother was from and when I saw him taking an oath of office with the Bible his mother gave him, I was blessed. The most powerful man in the world was not ashamed to hold on to the Word of God in his hand, calling on God to help him. I began to pray more for him as I also pray for many leaders including Prime Minister Theresa May and Nigerian President Buhari. I may not agree with their policies or their style of leadership but I am commanded to pray for them. The leaders will not do what we want them to do but if they do what they campaigned for, they will not be blamed, only the opposition party will.

The United States President is putting America first and I greatly admire and respect him for that. I wish other leaders will put their citizens first. God will actually bless them for doing so. This will bring us to the North Korea and Iran topic. The President may not be popular in the United Kingdom or Europe; it doesn’t matter if his is in the country that elected him. Charity begins at home and I think every leader should emulate that, so their citizens can be proud of them.

Time shall tell if his decision to cancel the deal President Obama singed with Iran is a bad judgement or not. If I were Mr. President I would honor that agreement but send a very serious warning to the regime that will make Iran play her cards well. I believe that it would make Iran respect President Trump more; knowing that it was a democratic president who signed the agreement and a republican president is honoring it. Please also bear in mind that Iran has the tendency not to follow up on promises made and due to such behaviors you must be careful in dealing with such partners. Especially when it has to do with weapons of warfare and because of the President’s stance on Israel you would expect some criticism in some parts of the world. In my opinion I would have allowed President Obama’s agreement with Iran.

Few months ago the President of the United States of America and the President of North Korea were enemies. Both men called each other different names with ferocious anger and the world was on the edge. Some leaders such as Russian and Chinese presidents were advising caution and warning them as to not to escalate the tensions that was already high all around Korean Peninsula.

It was not a secret that North Korean leaders for many years have been provoking the west and especially the U.S., knowing about the relationship between U.S. and South Korea. Both men have boasted how they may use their weapons of mass destruction if pushed to the wall. We all heard it and after a few months here comes the unification of the North and South Korea. I wept a bit about that because I have gone to the prayer mountain in North Korea a few times for prayer on North and South Korean unification. I have been in the stadium in Seoul, South Korea with hundreds of thousands of Christians praying for unification. I thank God for Rev. Dr. David Yonggi Cho of Yoido Full Gospel Church who was organizing such prayer events every year. It was a tear of joy. Just weeks after we began to hear that U.S. and North Korean officials are talking and soon it came out that both presidents might meet. The critics were prophesying doom and how it will not happen and if it did, it won’t be real. I must give a big credit to both men. Jesus Christ said “agree with your enemy quickly while the opportunity is there” (Matthew 5:25). It was what no U.S. president had ever done and no North Korean leader had ever done.

This book is about life in general, about the day-to-day occurrences in our streets, and on how to overcome the tragedies of our day.

Dr. Joe T. A. Nwokoye, born and bred in Nigeria, migrated to United Kingdom in 1986. He is the founder and general overseer of Zion Praise Centre International Inc. churches, the president and founder of Zion Foundation and Zion Bible Institute, a counsellor, and an international motivational speaker who travels extensively. He is also the author of God Will Do It For You and Time Bombs Are Ticking In UK. He resides with his family in Scotland, United Kingdom.