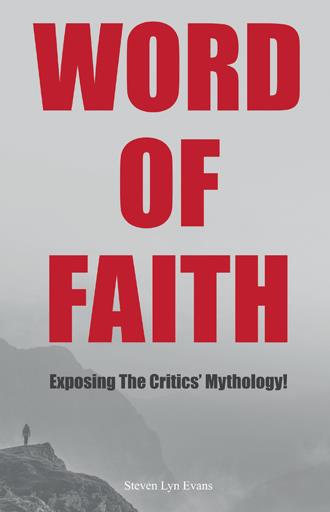 The critics' mythology holds to an audacious methodology. It is both historically and theologically wrong. They have peddled a myth, created a legend and divided the church. It’s time for truth.

D. R. McConnell mixed an unhealthy combination of limited history, biased theology, and unconscionable criticisms to create mythology attacking the ‘Word of Faith’ movement. He linked Revd. E. W. Kenyon to the metaphysical cults and then linked Revd. Kenneth Hagin to Kenyon and the mythology was born. The mythology claimed that the ‘Word of Faith’ movement was cultic. Many other critics jumped onto the mythological bandwagon. The most vocal was probably Hank Hanegraaff who took the title of ‘The Bible Answer Man.’ However, often his efforts have been exposed as being less than has been advertised, they are both theologically and historically deficient. DeArteaga for example has observed that Hanegraaff’s arguments lack ‘a broad Christian historical perspective’ (2001, p.268). He goes on to say that Hanegraaff’s views on aspects of the atonement are, ‘a serious injustice too many Orthodox believers’ (2001, p.271). The irony here is remarkable because many years later in 2017, Hanegraaff was to join the Eastern Orthodox Church! This change of emphasis by Hanegraaff is so dramatic that some are wondering if perhaps more irony is to come and maybe his next work might be a defense of the ‘Word of Faith’ movement?

Perhaps it is not surprising given the spread of the mythology, that the Perriman Report highlighted significant problems in establishing accurate and balanced appraisals of the movement (Perriman 2003, p.1). The Perriman report chastises the critics of the ‘Word of Faith’ movement and suggests that the debate regarding the orthodoxy and roots of the movement ‘has been marred by misrepresentation, polarization, and invective’ (2003, p.15). It goes on to say that critics of the ‘Word of Faith’ movement, tend to be biased in their use of limited historical and biographical material, which has ‘frequently been assembled for the purpose of discrediting the movement’ (2003, p.1). Further, it recognizes that the critics have created ‘caricatures’ which it concludes are ‘an indiscriminate instrument of polemic’ (2003, p.231-4). In other words, the danger of creating caricatures is that it causes a generalization to take place. This is precisely what the critics were attempting to do in establishing their mythology of Kenyon and the ‘Word of Faith’ movement. Their generalizations repeatedly fail to engage in the complexity of the fusion of doctrines that exist. The Perriman Report insightfully observes ‘…that there is more to the teaching of Hagin and Copeland than is found in the one-sided analysis of their opponents’ (2003, p.232). DeArteaga points out that ‘the key is recognizing the difference between ‘collections’ and history; between assembling a scrapbook of errors and writing a fair description of another’s theology’ (1996, p.269). The Perriman report has been clear that some of the critics of the ‘Word of Faith’ movement have adopted polarized positions, which in turn have led to unbalanced and extreme classifications of the movement as being ‘cultic’ (2003, p.15).

The mythology in summary

I have listed the main points of influence on this work below, but this work is not limited to these points. We will uncover other related issues. We will expose the mythology of the leading critics of the ‘Word of Faith’ movement, who have claimed:

Within this work, we will show clear historical and theological evidence to disprove the critics' claims. It will be shown that:

I want to highly recommend Dr. Steven Lyn Evans book, Word of Faith, Exposing the Critics’ Mythology!” Dr. Douglas J. Wingate, President and Founder of Life Christian University, Florida, USA.
“Bishop Steven Evans is clearly the person to write this defense of the Word of Faith…I wholeheartedly endorse this book.” Bishop Tom Brown, Word of Life Cathedral, Texas, USA.
“Factual, brilliant, timely, a masterpiece and must-have for every believer. Next to the Holy Bible, don’t read any other book this year!” Revd. Melvin Banks International Evangelist, England, U.K.
The critics of the Word of Faith movement have invented a mythology. Within this book their position is shown to be both historically and theologically deficient! Often the critics advocate for the heresy of cessationism. They have peddled their mythology and divided the church. It’s time for truth!

Bishop Dr. Steven Lyn Evans left his home in South Wales as a young 20-year-old with a prayer and a dream to become a singer. Within four days he was singing on the stage of the world-famous London Palladium. In 1996 whilst performing at the Royal Variety Show, God used a conversation with fellow Welshman and singer Tom Jones, to convict him that his ‘calling’ was to preach the Gospel of Jesus Christ.
He is Lead Pastor of Living Faith Church in Greater Manchester and is also the Presiding Bishop of The International Christian Church Network (TICCN).
His ministry gained widespread attention due to the many miracles of God following. Testimonies of these were featured on front page secular newspaper headlines in Great Britain.
Steven testifies to the need for bible believing Christians to compromise their minds to the Word of God rather than compromising the Word of God to the limits of human understanding.