The Last Day of Regret 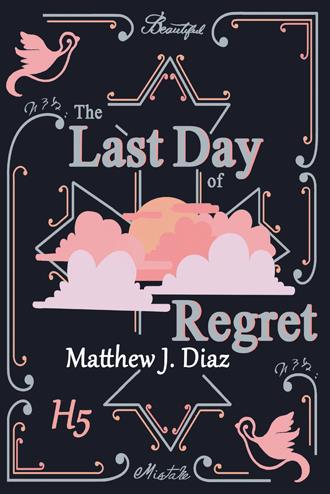 If I am honest, if I do not write these events down, I will forget them, and I never want to forget them. How else could I attempt to recollect the entire life’s events of another person in something as small as a book? Surely, the actual transcript of the life of my sister Hannah would generate volumes upon volumes. It would be enough to warrant her own section in the library. My beloved sister’s life would be in the Adult Nonfiction section, with each book labeled H.5 along the spine, H for Hannah even though it should be listed by her last name Zeller. However, she absolutely hated always being last on the school rosters for everything. Since Hannah was the fifth child in our family, the youngest, the numeral 5 also seems appropriate. One could spot this section easily; it would stand out among the rest because of all the colors, patterns, and crafts protruding from the stacks. The shelves would be lined with markings of a sharpie with Hannah’s various doodles and drawings made throughout her life as well as every tattoo she had accumulated over her lifetime. Every book would have a different penguin scribbled in its inside cover, with no two looking the same because Hannah owned a multitude of stuffed toy penguins of various shapes, sizes and colors. Each book would be covered with an eclectic assortment of colors and styles of duct tape to protect the contents inside, and the pages would be bright pink since Hannah managed to convince our parents to paint her bedroom from top to bottom in what looked like the medicine you hate to drink for an upset stomach. The cover of Hannah’s last book would be carefully crafted out of wood, but lined with light blue duct tape with pictures of small black and white cartoon-shaped penguins in a pattern across every inch of the tape. There would be signatures on the cover from all sorts of family and friends who had been part of the various stories throughout Hannah’s life. Its as if this book cover were a cast for a broken arm that she would be removing someday. This last book would best represent Hannah and would stand out the most simply from its unique design. You can, in fact, judge this book by its cover. Unfortunately for us, Hannah’s story was cut short. The writing of her life suddenly stopped between the hours of 8:30 am and 10:00 am on one frightful Friday morning. We will never know how large these unwritten books would have been if the writing had continued until a more natural time in life took Hannah away. If we were to read the previous ten books, representing the past decade of Hannah’s life, we would find countless times where the words statistically should have stopped. With all the chances she took, teetering between life and death both for recreation and in depression, Hannah played Russian roulette plenty of times with each breath. However, Hannah managed to keep writing through blood, sweat, and tears. There are moments of suffering in the life of my sister Hannah, and it is the last ten books that contained the most pain, pain that defined and mark her. Those nights of drinking, drugs, sex, over-eating, cutting, and numbing the ever-deepening sadness in her heart, would be inscribed in these darker books. The nights where Hannah felt so hopeless and desperate for love and forgiveness but felt so shameful and alone would not be missed. Hannah carried this regret, yet the vicious cycle of addiction was her way of escaping the pain. Regret about having gone down the road in the first place would keep her there. Who would be able to stomach this dark journey of Hannah’s? Perhaps only those who have been there themselves, who understand the world that she lived in? In her early years, Hannah’s world was full of light and laughter, but the latter section of her life became a shadow of what those innocent years of her life once were. Every great story has a period of time when the hero is lost, where events seem hopeless, and the ending seems inevitably dreadful and miserable. Hannah’s journey would be no different. Hannah began her life courageously, but at some point, she lost her way and her life filled with sorrow. However, even though there was a decade of pain, it is in Hannah’s last book, the one that got cut short, the one with the beautiful blue duct tape with penguins and signatures from old and new friends, that she overcame the hero’s trial. This is how we know that it is okay that the writing came to an end—because Hannah had finally fought through the darkness. Her struggles did not disappear in her life, the temptation can still lurk within the far crevasses of our mind. However, it was the regret that no longer held Hannah down, the regret that had kept her from the purposeful life that is possible for us all.

“I don’t want to live anymore!” my sister admitted to my parents when she was fourteen years old. This cry for help increased with time and I would not fully grasp her inner demons until years after she died. Was it suicide, was it an accident, was it pre-planned or in the moment? At twenty four years of age my sister’s life suddenly ended and all I have left are my broken memories. Why did my compassion stop when she desperately needed it from me? These memories of guilt and the regret that I carry have brought me to my knees. This is a story about God picking me up again after the events leading up to, and following my sister’s last breath.

Mathew J. Diaz currently resides in Phoenix, AZ with his wife and four kids. He has his B.S. in Social Studies Secondary Education and earned his M.A. in Global Leadership from Fuller Theological Seminary. He worked in Student Ministries for over a decade before shifting his career to education. Currently he is one of the High School Bible teachers at Northwest Christian School.